The plant, known as Fab 68, is ultimately expected to produce both 3D NAND memory as well as 3D XPoint memory, a technology that the company hopes will dramatically expand its total addressable market in the data center. 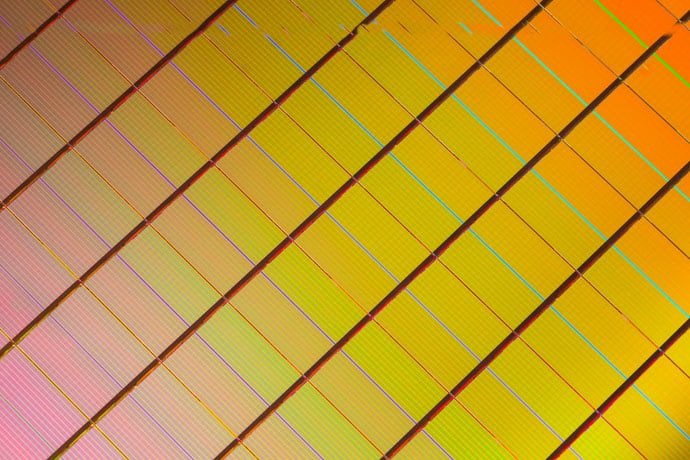 On Intel's most recent earnings call, management talked quite a lot about the progress it's making in its memory business in terms of both business performance and technology.

Let's go over what Intel management had to say.

Intel CEO Brian Krzanich said that Fab 68 "continues to exceed expectations, ramping ahead of schedule in terms of both output and yield."

Here's why that's a clear positive for Intel.

Higher output means Intel can crank out more wafers of NAND flash than it had originally expected to at this point in the ramp-up. Considering that the market for NAND flash right now seems rather supply constrained (Intel mentioned that its enterprise server processor business was held back due to a "supply/demand imbalance of [solid state drives]"), the more NAND Intel can crank out (and thus the more solid-state drives it can build), the more it'll be able to sell.

Additionally, the comment about yield rates is important, too. When a wafer of NAND flash is produced, the unfortunate reality is that not all of the chips produced are going to work -- defects on the processed wafer will render some of the chips unusable.

The lower a yield rate is, the fewer memory chips a given amount of installed manufacturing capacity can produce. Additionally, since wafer costs are essentially fixed, the fewer chips that come off a wafer, the more expensive each chip ultimately is.

Conversely, the higher the yield rate is, the more chips a factory can ultimately produce, and the lower the production costs.

So, the higher yields also bode well for Intel's ability to increase its NAND flash supply and for its cost structure, which ultimately leads to improved profitability.

Krzanich said "the combination of strong execution and favorable market conditions is accelerating [Intel's] path to profitability" in its non-volatile memory business.

He said the company's NAND flash business "returned to profitability this quarter ahead of [Intel's] earlier estimate and we expect it to remain profitable for the balance of the year."

Indeed, Krzanich also told investors that the company is now planning for the company's non-volatile memory solutions group (NSG) segment "to be profitable for the full year of 2018 versus [Intel's] prior end-of-2018 target."

So, if Intel's non-volatile memory business is profitable in 2018, then this should add several hundred million dollars to the company's operating income line.

Intel has been talking about a new non-volatile memory technology known as 3D XPoint for a while. 3D XPoint is more expensive than traditional NAND flash, but it's also a lot faster.

Intel is pitching this technology as both a high-performance storage technology (much faster than NAND flash, but more expensive) as well as a technology that can displace traditional DRAM as system memory in some data center applications.

Krzanich said the company sold "more than 200,000 units" of its Optane Memory product for personal computers.

Optane Memory, by way of reference, is Intel's branding of a product that has a small amount of 3D XPoint memory technology (either 16- or 32-gigabytes' worth) and serves to accelerate the storage performance of personal computers that have slower hard disk drives as primary storage.

In terms of the real revenue drivers for 3D XPoint products, Krzanich revealed that Intel has "more than 50 data center customers testing Optane [solid state drives] currently which will ship for revenue this year."

As far as the 3D XPoint-based products (DIMMs) that Intel hopes can serve as substitutes for DRAM, Krzanich says such products remain "on track for availability next year."