McDonald's (NYSE:MCD) and Starbucks (NASDAQ:SBUX) are the two most dominant businesses in the restaurant industry. Together, they account for more than 40% of the foot traffic to quick-service restaurants in the U.S., according to marketing intelligence company xAd.

As these juggernauts have expanded across the country -- and increasingly, around the world -- they've made their investors a fortune along the way. But which of these restaurant titans is the better buy today? Read on to find out. 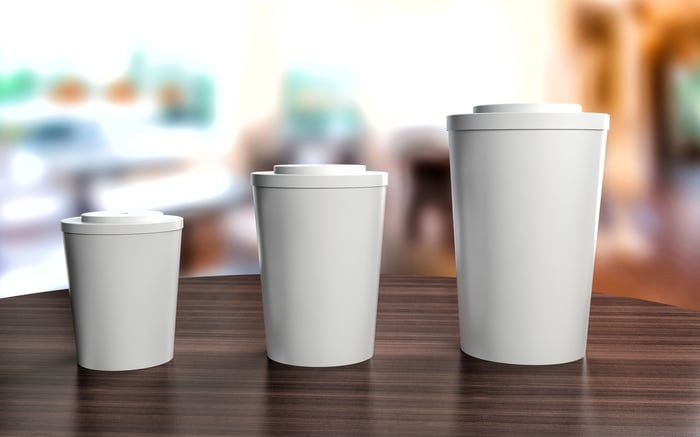 Starbucks plans to grow its global store count to 37,000 by 2021, up from less than 27,000 today. At the same time, the company believes it can drive mid-single-digit sales growth at it existing stores. In turn, management is targeting annual revenue and earnings growth of 10% and 15%-20%, respectively, over the next five years, though I should note that Starbucks recently lowered its growth forecast for fiscal 2017 in the face of "stiff consumer and industry headwinds."

McDonald's, on the other hand, already has more than 37,000 stores worldwide, but it's been more focused on improving its profitability by shedding costs in recent years. In November 2015, the company announced a plan to become 93% franchised by 2018, up from 81% at the time. Since then, McDonald's has sold off thousands of corporate-owned stores to franchisees. And this past April, McDonald's said it was on track for 93% of its restaurants to be franchised by the end of 2017, a full year ahead of schedule.

Now, McDonald's is refocusing on driving sales higher, though its annual financial targets -- including systemwide sales growth of 3%-5% and high-single-digit EPS growth  -- are significantly lower than that of Starbucks. As such, Starbucks has the edge when it comes to current and future growth potential.

Still, whether a company can ultimately fulfill its growth potential often comes down to its financial fortitude. So let's look at how McDonald's and Starbucks stack up in this regard.

Here we see that McDonald's leads in nearly every metric, but Starbucks has a sizable advantage in one important area: debt. In fact, while Starbucks has roughly $900 million in net debt, the figure at McDonald's checks in at a whopping $24.8 billion. The steady royalty fee-based revenue allows McDonald's to support this high debt load, but its debt-heavy balance sheet does makes it a relatively higher-risk investment than Starbucks in this regard. Therefore, in terms of financial fortitude, the edge goes to Starbucks.

No better-buy discussion should take place without a look at valuation. Let's check out some key value metrics for McDonald's and Starbucks.

With a higher trailing and forward price-to-earnings multiple than McDonald's, Starbucks may at first appear to be the more richly valued stock. However, when viewed in the context of the two companies' growth expectations, a different picture emerges. Analysts project Starbucks will grow earnings per share at an annualized rate of 19% over the next five years, compared with 10.2% for McDonald's. As such, Starbucks' price-to-earnings-to-growth, or PEG, ratio is nearly 25% lower than McDonald's. Viewed in this light, Starbucks is the better bargain.

All told, both McDonald's and Starbucks appear well positioned to continue to reward their shareholders in the years ahead. But with greater growth prospects, a stronger financial position, and a more attractive valuation, Starbucks is the better buy today.