Walt Disney (NYSE:DIS) had a strong first half 2017 despite negative headwind in its ESPN business.

The company reported $3.05 in earnings per share (EPS) for the six-month period, up from $3.04 a year ago. Disney's results were fueled by its Parks and Resorts division, which saw an 8% increase in revenue as well as a 16% increase in segment operating income. Studio Entertainment has been another high point for the company, with revenue for the first two quarters inching up 1% to $2 billion while segment operating income increased 21% to $656 million.

Media Networks, largely due to ESPN, was a weak spot for Disney -- revenue grew by 3%, but operating income dropped by the same amount. The company blamed the sports network's problems on "higher programming costs, partially offset by affiliate and advertising revenue growth," in its earnings release.

Going forward, while cable's decline as an industry remain a concern, Disney has set itself up very well to grow its theme park and movie businesses. That should help it continue to grow as it navigates a changing business model for ESPN and the rest of its networks. 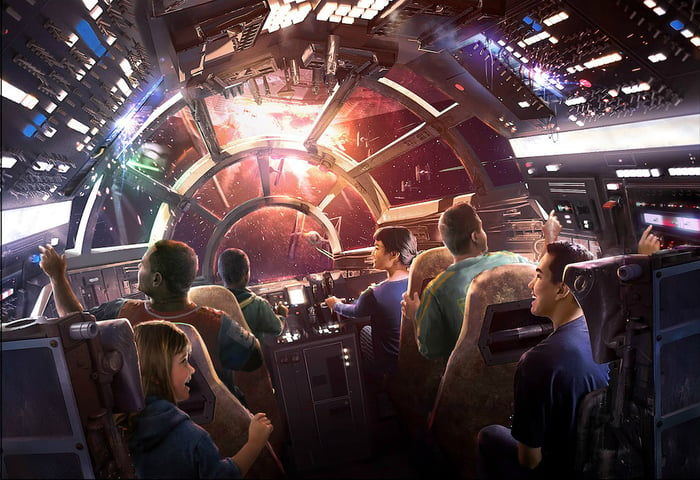 Disney will be opening lands based on Star Wars in Florida and California. Image source: Walt Disney.

Why is Disney set up well?

The Mouse House has managed to grow its theme park profits despite it being a time of major transition for it U.S. parks. Those changes, which include adding Star Wars lands at Disney's Hollywood Studios in Florida and at Disneyland in California, have kept profits up even as visitor totals are down.

All the drops have been small, less than 1%, but as new attractions open they should reverse. It's likely that Florida's Animal Kingdom will see the benefit of that in Q3 as it opened a land based on Avatar in late-May. That will be followed with a Mission: Space revamp at EPCOT later this summer, which kicks off a massive reset at that park.

By 2020, all four Disney theme parks in Florida and its two in California will have undergone major upgrades. Star Wars will be the most important attendance driver, but every new attraction drives some increased traffic. It's very likely that fans waiting for some of these changes have put off visits, meaning that a major rebound will occur as various new rides/lands open.

In its film division, Disney simply has the formula down. While its rivals still release movies that may not make money or might even lose a lot, that does not happen often with the company that began with cartoons.

Through buying Lucasfilm, Pixar, and Marvel, while also reviving its own animated division, Disney has created a repeatable move model. The company can release roughly three Marvel movies, two Pixar films, a Disney animated or live-action animated remake and a Star Wars each year to practically guaranteed success.

Disney's biggest strength is its ability to leverage a hit property onto other platforms. Star Wars, for example has always been a merchandising powerhouse and it has helped prop up Hollywood Studios while its land is being constructed.

The same has been true with Frozen, a hit film that now has a very popular ride at EPCOT and character meeting spots with long lines. Add in the countless product, games, and television extensions and you see how Disney is positioned to do more with every hit than nearly all its rivals.

Ultimately its the strength of Disney's intellectual property that will help it through any rough spots. The company's characters, movies, and shows will draw an audience no matter how they are delivered. The monetization on that may take a while to work out, as will ESPN's struggles. But ultimately when you can call in Han Solo, Lightning McQueen, or Goofy as a problem solver (among many others) audiences will come and they will pay.