Last December, President-elect Donald Trump suggested that the projected $4 billion-plus cost of the next-generation Air Force One planes was too expensive. In a somewhat cryptic tweet, he mused about canceling the order. (In fact, there was no firm order to cancel at that point -- just some preliminary plans.)

It's expensive to build a new Air Force One 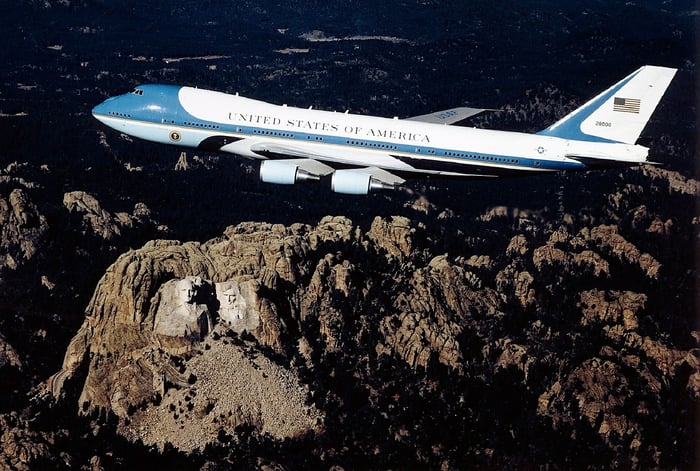 For example, Air Force One needs to be big enough to accommodate the president, the traveling press corps, Secret Service members, and any guests, while leaving space for a bedroom, office, conference room, and even a medical suite. It also needs to be outfitted with sophisticated communications equipment, missile defenses, and aerial refueling capabilities.

All of these features drive up the price. That's why it will inevitably cost billions of dollars to build a pair of state-of-the-art Air Force One replacements.

One area where the Air Force can save money is in buying the basic airframe. It just so happens that Boeing already has "white-tail" 747-8s: planes that have been built but don't have a customer lined up.

Some of these white-tails are the result of Transaero's 2015 bankruptcy. Transaero was for many years the largest privately owned airline in Russia and the main competitor to Aeroflot. However, the ruble plunged, and Russia fell into a deep recession in 2015 due to the impact of falling oil prices and sanctions related to Russia's annexation of the Crimea.

This financial crisis left Transaero in deep financial distress. Aeroflot contemplated rescuing its smaller rival -- for a nominal price of one ruble -- but pulled out at the last minute. This led to Transaero's collapse. The carrier's last flights operated in October 2015.

Transaero left behind a substantial order book for widebody aircraft, including slow-selling jumbo jets like the 747-8. In fact, Boeing still lists orders for three 747-8s from Transaero, even though the carrier has been defunct for nearly two years. Unfortunately, two of those 747-8s were built before Transaero's shutdown, and Boeing wasn't able to find another airline to buy them.

The Air Force has now decided to scoop up those two white-tail planes at a steep discount. Over the next five years or so, they will be retrofitted with all of the special equipment necessary to serve as Air Force One.

A good move, but the cost savings will be modest

Using white-tail aircraft for the new Air Force One fleet will be good for both Boeing and taxpayers. Boeing has been desperate to unload these unwanted planes, so any deal to sell them is a positive step. Meanwhile, the government probably got a great deal for taking the white-tail airframes, similarly to how retailers often offer steep discounts for floor-model merchandise.

On the other hand, it's important to recognize that the airframes represent a small piece of the total cost of creating the new Air Force One fleet. The list price of a 747-8 is $386.8 million, but discounts of 50% to 60% are normal for commercial airplanes. For an out-of-favor model like the 747-8, the discounts could be even greater.

Thus, the Air Force probably could have negotiated to buy new 747-8s for $150 million each. Even if it got a 75% discount for taking the white-tail Transaero 747-8s, the savings would be just over $100 million. (Boeing required the government to keep the exact sale price private.)

That is a meaningful amount of money, but still relatively small compared to the multibillion-dollar price tag President Trump had complained about. This just highlights how much of the cost of Air Force One relates to its special bells and whistles rather than the airframe itself.

The only way to significantly reduce Air Force One's cost would be to remove a lot of its advanced technology. Clearly, that's an unacceptable trade-off for an aircraft designed to carry the president of the United States.