Shares of Costco Wholesale (NASDAQ:COST) have proven to be a solid investment, gaining 150% over the past decade, more than double the return of the S&P 500. The company's prices are essentially unbeatable thanks to its warehouse-club model, and tens of millions of members shell out membership fees each year for access to its stores.

If you missed the boat on Costco, don't worry: There are other high-quality companies that have the potential to provide Costco-like returns. We asked three of our Foolish investors each to highlight a company that could do wonders for your portfolio. Here's why Nike (NYSE:NKE), Align Technology (NASDAQ:ALGN), and Walt Disney (NYSE:DIS) could match Costco's record in the coming years.

Steve Symington (Nike): As I think about stocks that might be able to rival the returns of Costco, I'm looking for businesses that have staying power, should deliver steady growth over periods of years, and preferably pay a dividend along the way. Athletic footwear and sportswear giant Nike immediately comes to mind.

In addition to its 1.2% annual dividend, Nike's shares recently jumped 9% in a single day after the company posted impressive fiscal fourth-quarter 2017 results just over a month ago. Revenue rose 7% at constant currency to $8.7 billion, net income increased more than 19% to $1 billion, and net income per share grew 22.4% to $0.60 -- with each figure arriving well ahead of the market's expectations.

This was an especially surprising development in light of the difficult domestic retail environment, which is holding back the growth of some of Nike's smaller, U.S.-focused competitors like Under Armour. To be fair, it helps that Nike already collects well over 50% of total Nike-brand revenue each quarter from markets outside of North America.

But Nike's global growth story is far from over. In part by focusing its efforts on roughly a dozen key cities in 10 different countries, Nike maintains a goal of increasing annual revenue to $50 billion by fiscal 2020 (up from consensus estimates for roughly $36 billion this fiscal year), with growth in earnings per share in the mid-teens percentage range over the same period. With shares of Nike trading at roughly 21 times this year's expected earnings -- a fair premium given the high quality of its business -- I think the stock is poised to offer market-beating, Costco-esque returns for years to come.

A great stock -- clear and straight

Keith Speights (Align Technology): Costco has been great for investors for a long time. But over the past five years, another stock has outperformed the big warehouse club by a factor of seven to one. That stock is Align Technology.

Align sells clear dental aligners and intraoral scanners. Its Invisalign clear aligners are practically invisible and in many cases can straighten teeth as effectively as metal-and-wire braces. Align's intraoral scanners allow orthodontists and dentists to create 3D models of patients' teeth. Those models are then sent electronically to Align for manufacturing of clear aligners that are custom-made for each patient.

Demand for Align Technology's products has soared. The company posted record-high shipment volumes for Invisalign in the first quarter -- and was able to raise the average selling price to boot. That's a perfect recipe for driving revenue and earnings higher, which is exactly what's happening for Align.

With its stock price nearly doubling over the last 12 months, can Align Technology continue to generate great returns? I think the answer is a resounding "yes." The company has several key paths for sustained growth. Two of them focus on maximizing its current market. Align is increasing its marketing efforts for Invisalign, to reach more customers. It's also working to expand more internationally.

Perhaps more importantly, though, Align thinks it can grow the size of its potential market. The company continues to invest in development of new technologies. Currently, only around half of cases of malocclusion (misalignment of teeth) can be addressed by Invisalign. With new generations of the product, Align hopes to expand that market by 50%.

Tim Green (Walt Disney): Shares of Disney have stagnated over the past few years, with investors concerned about the long-term viability of the company's cable TV business. ESPN is a big moneymaker, but the cable sports network has been bleeding subscribers, losing 1.5 million viewers between February and May of this year alone. The future of televised (and streamed) sports is highly uncertain. 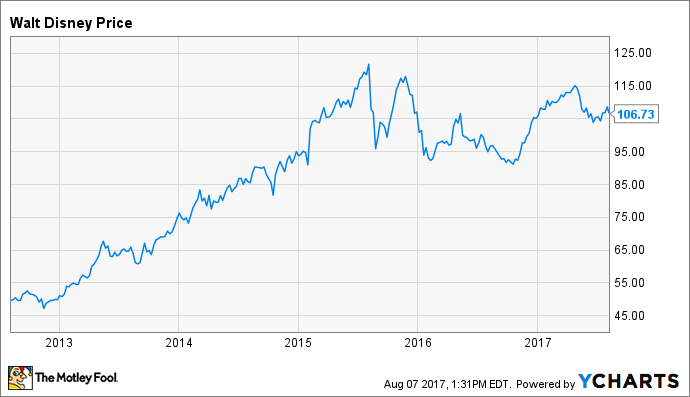 The good news is that Disney's other businesses are doing well. During the second quarter, both the parks and resorts segment and the studio entertainment segment posted 20% increases in operating income, more than offsetting a slump in the media networks segment. Disney's intellectual property, which includes Marvel and the Star Wars franchise, is second to none. The company acquired both of those properties relatively recently, buying Marvel in 2009 and Lucasfilm in 2012. These deals demonstrated Disney's ability to make smart, and extremely lucrative, acquisitions.

The Disney of the future will likely look different from the Disney of today, with less of a focus on traditional TV. Subscriber losses at ESPN are a real challenge, and that may prevent the stock from doing much of anything in the near term. But in the long run, Disney's vast trove of valuable properties and its knack for making intelligent acquisitions should drive solid returns for investors.