Companies are always looking for ways to grow, and Marriott International (NASDAQ:MAR) hasn't hesitated to make key strategic moves when the time was right. After acquiring Starwood Hotels & Resorts in late 2016, Marriott has now moved forward again with a joint venture with Chinese e-commerce giant Alibaba (NYSE:BABA) that it hopes will make even its impressive financial results from the second quarter pale in comparison to its future growth prospects.

Coming into Monday's second-quarter financial report, Marriott investors were ready to keep seeing the benefits from the Starwood merger, and the company didn't disappoint on that front. Yet the Alibaba announcement raised some other issues that will need to play out in the months to come. Let's take a closer look at Marriott and what its two announcements today mean for its future. 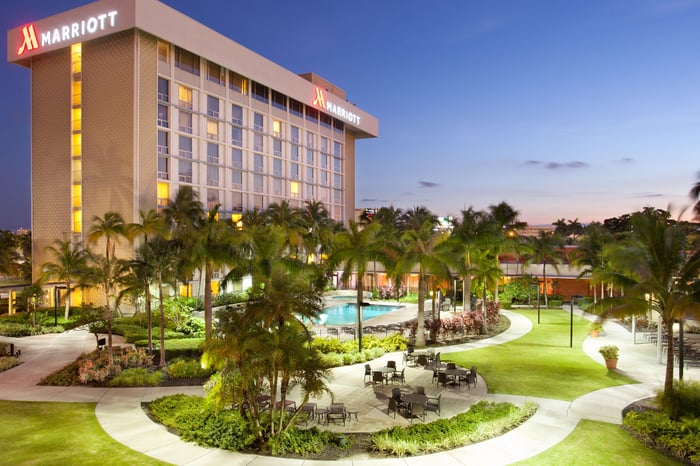 Marriott's second-quarter results showed further gains thanks to the Starwood merger. Total revenue was again up substantially, with sales of $5.80 billion showing gains of close to half and topping the consensus forecast for just over $5.6 billion on the top line. GAAP net income jumped by more than two-thirds to $414 million, and after making certain accounting adjustments, adjusted earnings of $1.13 per share were better than the $1.02 per share that most investors expected to see.

Taking a closer look at the numbers, Marriott kept seeing solid gains on key internal performance measures. Comparable systemwide RevPAR, or revenue per available room, was up 2.2% in constant-dollar terms during the quarter, although the corresponding number for the North American market was weaker at just 0.9%. Base management and franchise fees jumped by 53% from the year-ago quarter, and even incorporating the Starwood merger's numbers, adjusted growth of 8% in those fees was impressive. Worldwide incentive management fees gained 57%, with about 9% organic growth and the rest coming from the Starwood acquisition.

Marriott kept up its pace of growing its portfolio. The hotelier added 100 new properties with more than 15,500 new rooms, with just seven properties leaving the system. At the end of the quarter, Marriott had more than 6,250 properties with a total of almost 1.22 million rooms. Marriott's development pipeline was also impressive, with nearly 2,600 properties including more than 440,000 potential new rooms.

Marriott was particularly pleased with its agreement to develop a travel storefront with Alibaba. As Sorenson described the agreement, Marriott expects that "this joint venture will increase Chinese travel to our hotels worldwide, grow membership of our loyalty programs, and reduce our distribution costs." Marriott sees particular value in the 500 million active mobile users that Alibaba has and the potential to use the Alipay digital payment platform.

Still, there are questions for Marriott's near-term future. In its third-quarter guidance, Marriott said that North American comparable RevPAR will likely be flat from year-ago levels, with the company relying on 3% to 5% growth in international comps to produce overall gains of 1% to 2% worldwide. Fourth-quarter guidance will be a bit stronger, with comps up 1% to 3% in North America and worldwide based on 2% to 4% growth internationally. Fee revenue numbers will be in a range of $810 million to $825 million in the third quarter and $804 million to $849 million in the fourth quarter. Overall, 2017 should produce 1% to 3% growth in worldwide comps, with international markets producing most of the gains.

Marriott investors weren't entirely comfortable with all the news, and the stock fell 2% in after-hours trading following the announcement. The hotel company will have to prove that it can keep moving forward with the full integration of Starwood while also making smart forward-looking strategic moves as well. With favorable global economic conditions, it's up to Marriott to make the most of the opportunities it has right now.