The hotel industry is a global powerhouse, but it's still susceptible to the ups and downs of the economic cycle. Even a hotel company as large as Marriott International (NASDAQ:MAR) can't escape economic slowdowns entirely, and as much of the world labors under a variety of financial pressures, Marriott has recently predicted that it would see some negative impacts on its own business from the macroeconomic weakness it's seeing.

Coming into Monday's second-quarter financial report, Marriott investors were prepared for some sluggishness, but they still wanted to see whatever encouraging signs the hotel giant could give them. Marriott wasn't able to reassure investors completely, and the hotelier still expects some tough times ahead. 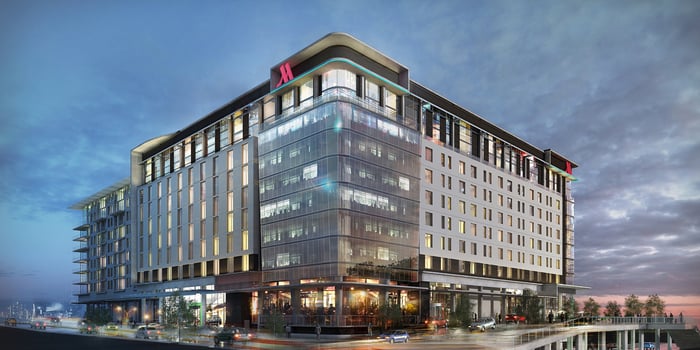 Marriott's second-quarter results weren't entirely satisfying. Gross fee revenue of $999 million was up 5% from what the company posted a year ago. However, total revenue including cost reimbursements fell 2% to $5.31 billion, which was less than what most of those following the stock had expected. Adjusted net income of $525 million was down 15% from year-earlier levels, and the resulting adjusted earnings of $1.56 per share was only able to match the consensus forecast among investors.

The fundamental metrics that Marriott uses showed ongoing weakness. Comparable revenue per available room, or RevPAR, rose 1.2% worldwide. North American RevPAR was up 0.7%, decelerating further from three months ago, and international RevPAR of 2.8% wasn't able to lift Marriott's overall numbers by too much.

Fee income helped to offer some upside for Marriott. Base management and franchise fees grew almost 8% to $834 million, with the company successfully charging higher branding fees in order to add to modest levels of unit and RevPAR growth. However, as we've seen before, incentive fees were down 6% to $165 million. That reflected weaker profits in North American hotels, as well as some currency pressures from overseas.

Marriott kept expanding its real estate network, with 112 new properties adding more than 16,000 rooms to the lodging portfolio. That brought totals to 7,100 properties and almost 1.35 million rooms. Marriott's pipeline includes another 2,900 properties with 487,000 rooms in development.

What's next for Marriott?

CEO Arne Sorenson pointed to the importance of expansion. "Our owners and franchisees continue to sign new hotel deals at a rapid pace," Sorenson said, and he went on to note that "our pipeline includes five new all-inclusive resorts to be built over the next several years, which will be part of our newly launched all-inclusive platform." The CEO believes that these packages will see rising demand as travelers want more distinctive vacation experiences.

Yet continued weakness could last for the rest of the summer and beyond. In the third quarter, Marriott sees gross fee revenue rising just 1% to 3%, with earnings of $1.47 to $1.51 per share, down 11% to 14% from year-ago levels. Fourth-quarter gross fee revenue should climb at a faster 8% to 9% pace.

Backing out to the full year, Marriott has reduced its RevPAR growth projections to a range of 1% to 2% worldwide and in North America, with just 2% to 3% growth internationally. Gross fee revenue guidance of $3.82 billion to $3.85 billion was moved lower from the company's earlier forecast, even though it still would represent 5% to 6% growth from 2018. Earnings projections of $5.97 to $6.06 per share were at the lower half of Marriott's previous range and would be down 2% to 4% from last year's bottom-line numbers.

Marriott investors weren't terribly enthused about the numbers, and the stock fell 1% on Tuesday morning following the Monday afternoon announcement. Despite its size and reputation, Marriott still has to do hard work if it wants to avoid some of the economic pressures that are affecting the hotel industry more broadly.