Microsoft (NASDAQ:MSFT) recently reported impressive quarterly earnings. Revenue grew 10% on a constant currency basis, leading to a 16% increase in operating income and a whopping 43% increase in earnings per share -- though, mobile write-offs and lower taxes contributed to the outsized EPS figure.

The results were largely due to incredibly strong growth in Microsoft's cloud products. Its Azure IaaS platform grew revenue 97%, Dynamics 365 delivered 74% revenue gains, and Office 365 Commercial grew 43%. Bookings, which equals revenue growth plus growth in deferred revenue, was a robust 30%, which analyst Kash Rangan of Bank of America described as "off the chart."

... nothing shows up in just one quarter. We have been working on this for a long time whether it is the product and the approach we have taken from IaaS to PaaS to SaaS, even the diversity of our SaaS offerings, and also how we think about going to market. All of these have been multiple years of hard work ...

The fruits of the strong results can be traced back to Nadella's hiring as CEO at the beginning of 2014. Let's examine Nadella's tenure and see what steps he took to turn Microsoft around. 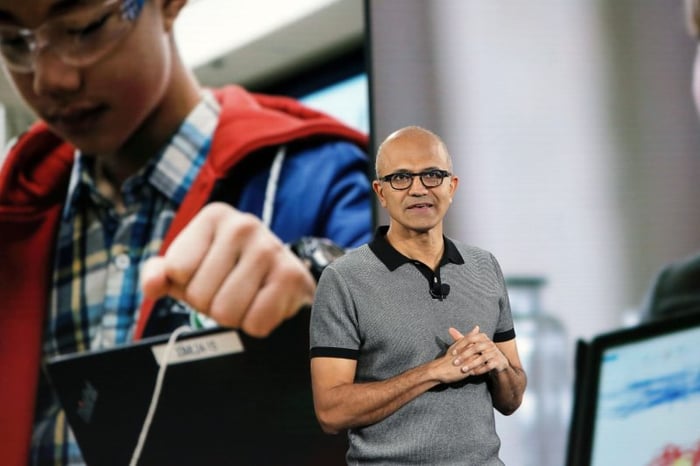 While Microsoft is now a clear number two behind Amazon in the cloud race, this was not the case in 2014. Although Microsoft had begun its cloud offering, it was thought to be behind Google and IBM at the time, and well behind Amazon. While Steve Ballmer was still CEO when Microsoft built its cloud, the project was likely the product of Nadella's leadership, as he was Executive Vice President of Cloud and Enterprise at the time. While in the position, Nadella spent considerable effort reaching out to independent software vendors to coordinate running applications on Microsoft's nascent cloud project.

Microsoft then followed that commitment up with large investments in data centers. Nadella's expertise and commitment to the cloud -- both in terms of time and financial resources -- manifested itself in this quarter's number.

Besides the cloud, Nadella was also able to usher in a badly needed change of culture at Microsoft. Prior to his tenure, the company's CEOs -- Bill Gates and Steve Ballmer -- were both founders that had created the enduring Windows franchise. As such, the company had long had a culture of protecting the Windows franchise by any means necessary, even if those means were out of step with today's more open and flexible world. Prior to Nadella, for instance, Microsoft made its Office software suite -- which is used by just about every business professional -- only available on Windows operating systems. This had the double-negative effect of not only losing potential sales but also spurring customers to look for Office alternatives.

Nadella changed that. Six months after he took the helm, he opened up Microsoft's Office Suite to iOS and Android devices. Nadella also went on to proclaim, "I love Linux," even though Linux was the operating system Steve Ballmer once called a "cancer."

Nadella also offered a free version of Windows, open-sourced more of Microsoft's software tools, and partnered with rivals such as Workday and Salesforce so even competing software vendors could operate on Microsoft's cloud infrastructure.

Nadella also made Microsoft's hard-charging and competitive culture more friendly. Employees were no longer graded on a curve (which determined bonuses or promotions), and new hires are listened to as much as longtime company loyalists. When hackers infiltrated Tay, one of Microsoft's AI bots, causing it to write racist tweets, Nadella took a decidedly softer tone than what would have been likely from Ballmer, encouraging employees to keep learning and improving. The friendlier atmosphere sets Microsoft up to better compete for top talent against formidable rivals such as Apple, Google, and Facebook).

Finally, Nadella pushed Microsoft into making new bets on artificial intelligence, as well as next-gen hardware tools like Hololens (a virtual reality tool for business), and the Microsoft Surface, a sleek offering that many believe has features equal to, or better than, Apple's laptops and tablets. 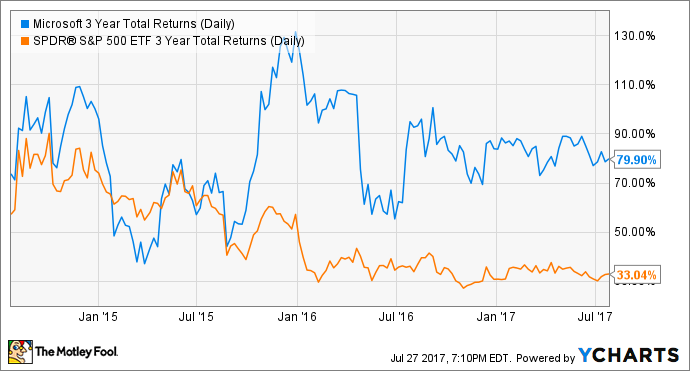 While the book on Nadella's tenure has yet to be finished, last quarter's results -- and Microsoft's performance over the last few years -- are a testament to his strategic and cultural shifts. In an age where business is dominated by tech -- an industry known for speed, talent, and disruption -- having the right person at the top, setting the right tone, can make all the difference.