It's no secret that Suburban Propane Partners' (NYSE:SPH) distribution was already preposterously high. After two straight years of record warm temperatures, the company's cash flow has been evaporating. In the company's most recent earnings announcement, management made the right call and said that it would cut its payout.

Let's take a look at the company's latest results and find out what management has in mind with this payout cut. 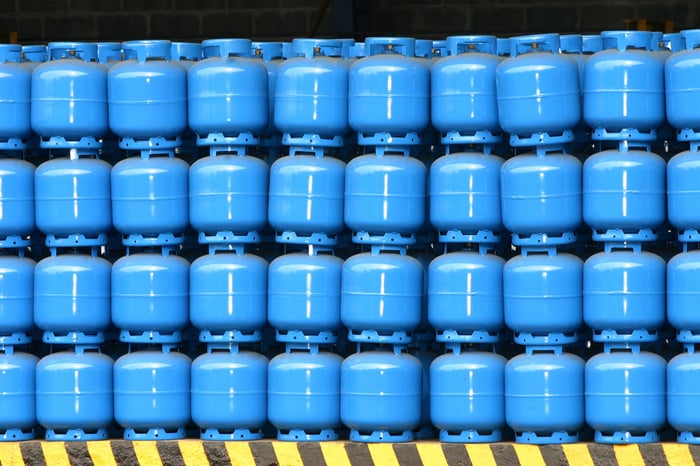 First things first: Don't get too caught up comparing sequential quarterly results. Selling propane and heating fuel oil is a notoriously seasonal business, with the bulk of revenue and earnings coming in the winter months. Suburban's year-over-year results are a more accurate depiction of the business.

Using that as a gauge, this quarter brought more of the same for the company, which isn't necessarily a good thing. 2016's winter was difficult for home heating fuel sales as the average temperatures in the quarter were unseasonably high. This past quarter was even worse. The average temperatures across all of Suburban's service territories were 18% warmer than normal and 9% warmer than during the same period last year.

However, higher selling prices kept revenue higher in the quarter. The cost of buying propane and heating fuel also increased in the quarter, but Suburban was able to pass on the difference to customers.

It was only a matter of time until Suburban announced it would cut its payout. The trend toward warmer winters hasn't shown any signs that it will get any better, and the only way for Suburban to grow in this mature, fragmented market is to acquire smaller players that are in even worse financial shape.

So CEO Michael Stivala announced in a press release that there is likely going to be a cut to the payout for the fiscal fourth quarter of 2017, and possibly an even deeper cut in 2018:

This has been, and continues to be, a deliberate and thorough process to evaluate the business under many different circumstances, all with the goal of best positioning the business for long-term profitable growth, starting with a return to strong financial metrics. A reduction in the annualized distribution would enhance our distribution coverage ratio, provide excess liquidity to reduce leverage and, more importantly, provide enhanced financial flexibility to support our growth initiatives.

Suburban Propane Partners is at its best when it is able to generate excess cash in a fiscal year and uses it to gobble up smaller fish. Selling propane and heating oil is a rather durable business, but there isn't much growth in this industry. Cutting the payout now and getting ready to grow again in 2018 is the right move for management, even if it is at the expense of current shareholders. In reality, though, investors were already expecting this. Shares barely moved the day the cut was announced, and the stock currently has a distribution yield of 14.75%.

Buying shares of Suburban right now is a bit speculative, because we don't know how deep the cut will be. So probably the best course of action is to hold off and see what happens in the coming months.