It was almost oppressively sunny in many parts of the country last week. Luckily for certain investors, it was also metaphorically sunny in terms of dividend raises. We remain in the glow of the summer earnings season, that magical period when select companies declare dividend raises along with their quarterly results.

For the second week in a row, there was a plethora of lifters. Here are three I believe are particularly worthy of note. 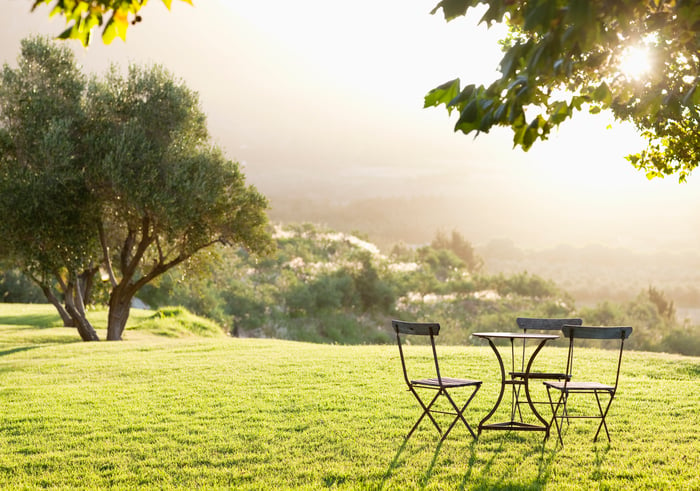 Cheesecake Factory (NASDAQ:CAKE) is raising its quarterly dividend by 21% to $0.29 per share.

Will that extra dessert be enough to halt the slide in the company's stock? In June, the company said its Q2 comparable sales would probably be lower on a year-over-year basis, ending an impressive streak of 29 straight quarters of growth. Sure enough, last week the earnings release revealed a 0.5% slide in this ever-so-critical metric for restaurants. 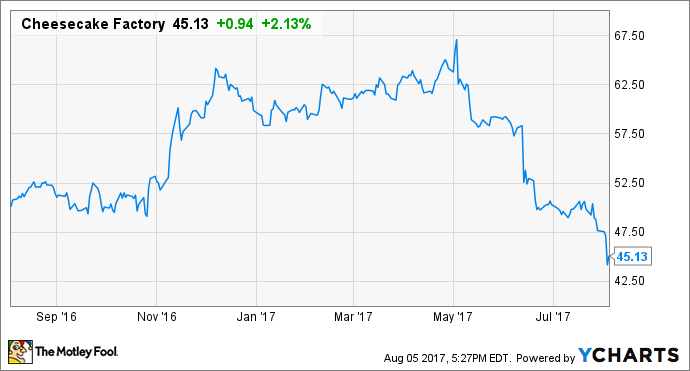 Cheesecake Factory also isn't making significant improvements to its top or bottom line. In Q2, net profit was down slightly from Q2 2016, at just over $38 million. Revenue inched up less than 2% to nearly $570 million. Management blamed the adverse effects of bad weather. These apparently affect its many restaurants with large patio spaces.

Meanwhile, the enhanced new dividend looks fairly safe. The payout ratio when we push the new dividend into the Q2 EPS is a manageable 37%. In terms of free cash flow, Cheesecake Factory lately tends to spend nearly all of it on share buybacks and dividends. Upping the latter could very well mean cutbacks in the former; regardless, I think the company needs to keep its payout attractive, so I think it's safe for now.

Cheesecake Factory's upcoming distribution is to be handed out on Aug. 29 to stockholders of record as of Aug. 16. At the current share price, this would yield 2.6%, which is more caloric than the 1.9% average yield of dividend-paying stocks on the S&P 500.

In the latest in an ever-lengthening series of raises, llinois Tool Works (NYSE:ITW) is hauling its quarterly dividend 20% higher to $0.78 per share.

That's entirely in character for the company, as it's a Dividend Aristocrat -- one of the rare market denizens that has lifted its payout at least once annually for a minimum of 25 years running. With this latest increase, Illinois Tool Works extends its run to an impressive 53 years. 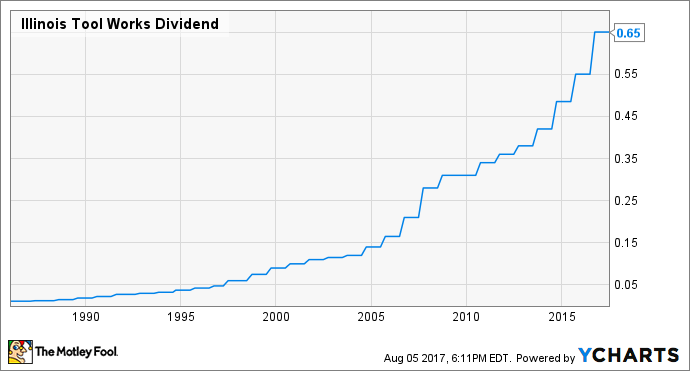 Optimism is in the air at the company, with an encouraging Q2 just behind it. During the quarter, buoyed by an accelerating automotive segment and good performance from its more cyclical businesses, the company managed to improve both its revenue and net profit figures. The former rose by 5% on a year-over-year basis (to $3.6 billion), while the latter grew 12% to $587 million, beating estimates.

This performance should help lift full-year 2017 results. Illinois Tool Works upped its guidance for the period on the back of that encouraging quarterly report.

The company's fundamentals are looking pretty good just now. Income investors should be cheered not only by the hefty dividend raise, but also by its not-heavy payout ratio of 46%. Granted, spending on the dividend plus share buybacks has exceeded free cash flow in recent fiscal years, but not to an alarming degree. Regardless, the company always manages to keep lifting the distribution, so I wouldn't worry much about its future.

Illinois Tool Works' new payout will be dispensed on Oct. 10 to investors of record as of Sept. 29. It yields a theoretical 2.2%.

Healthcare Trust of America (NYSE:HTA) is the mildest of our three chosen dividend raisers this week. The real estate investment trust, which true to its name specializes in medical office buildings, is bumping its quarterly payout less than 2% higher to nearly $0.31 per share.

Healthcare Trust is going the growth-by-acquisition route lately. In May, it agreed to a big $2.75 million deal to buy a portfolio of offices and medical development facilities from fellow REIT Duke Realty.

That's going to add nicely to Healthcare Trust's asset list, but it's not doing wonders for the finances. The deal's expenses dampened profitability in the company's Q2, in spite of a very pleasant 24% year-over-year increase in total revenue. Funds from operations (FFO) -- the most critical profitability metric for REITs, as it strips out typically high depreciation amounts, plus other line items -- inched up less than 2%.

As for the payout ratio, in terms of FFO the new dividend slightly exceeds the Q2 FFO per share figure of $0.30. But we should bear in mind that REITs are required to distribute nearly all of their profitability in the form of dividends, plus this particular one has done a good job growing its FFO. Although I would expect only modest raises, I think this payout will keep increasing. 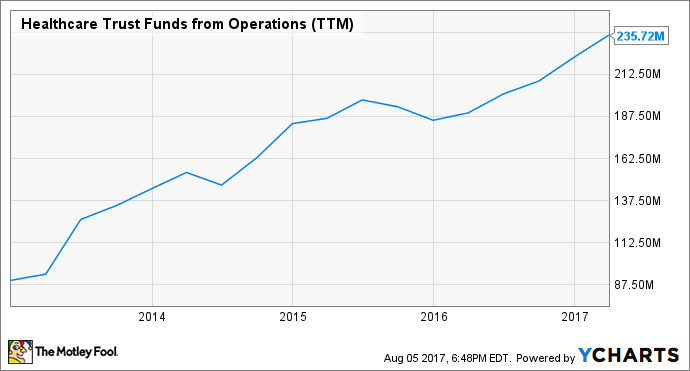 Healthcare Trust's new payout will be distributed on Oct. 6 to shareholders of record as of Oct. 2. It would yield 4.1% on the company's latest closing stock price.