Please ensure Javascript is enabled for purposes of website accessibility
Log In Help Join The Motley Fool
Free Article Join Over 1 Million Premium Members And Get More In-Depth Stock Guidance and Research
By Eric Volkman - Jul 24, 2017 at 9:51AM

In the whoosh of the current earnings season, PPG Industries, J.M. Smucker, and Bank of New York Mellon get more generous with their dividends.

Here we go -- the first storm of summer. Now that the latest quarterly earnings season has kicked off, as expected we've seen a fresh set of dividend raise declarations from big companies over the past few days.

We can anticipate more as the market's companies report their results. In the meantime, let's take shelter and have a look at three of those raisers. Reliable dividend raiser PPG Industries (PPG 1.51%) has decided to lift its quarterly payout by 13% to $0.45. This boost maintains the company's status as a Dividend Aristocrat, one of the select few stocks that has upped its distribution at least once every year for a minimum of 25 years running. 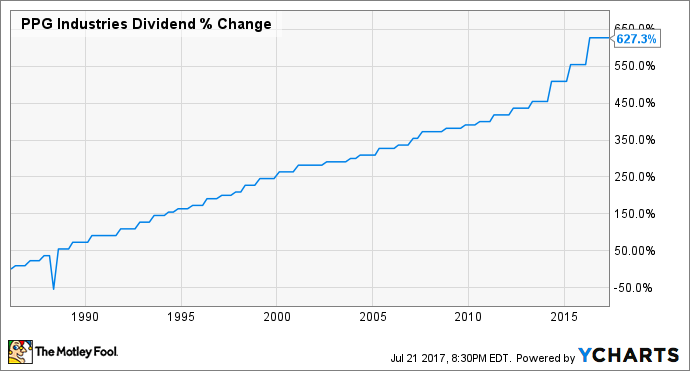 That double-digit boost might be an attempt to juice the company's stock price, which has basically flat-lined since mid-2014. That's no surprise, given PPG's stagnant revenue and adjusted net income lines. Both metrics inched up only slightly in the company's Q2; zooming out, we see that's been the pattern over the past few years. Meanwhile, numerous recent attempts to buy European peer Akzo Nobel have been unsuccessful.

Meanwhile, free cash flow has dipped lately, but on a trailing-12-month basis it's still well in the black at nearly $860 million -- almost double what it'll be paying in annual dividends. That also leaves some room for the company's latest share-buyback program, which received a fresh authorization of $2 billion late last year.

So although PPG hasn't been the most inspiring company in terms of fundamentals lately, I imagine it'll keep its dividend raise streak alive going forward.

The company's new payout will be dispensed on Sept. 12 to stockholders of record as of Aug. 10. At the most recent closing share price, it would yield 3.4%, well above the current 1.9% average of dividend-paying stocks on the S&P 500.

J.M. Smucker (SJM 0.57%) is slathering a little more jelly onto its quarterly dividend. The company announced that it will bump the distribution 4% higher to $0.78 per share.

However, like its fellow raiser PPG Industries, Smucker's recent fundamentals have been rather tepid. Last month the company released its Q4 and fiscal 2017 results, which revealed modest drops in revenue and steeper falls in profitability for both periods.

As with other traditional food companies, it's struggling with a shift in consumer preferences to more wholesome foods -- Smucker's jellies and the company's Jif peanut butter don't fit the bill.

It might surprise some to learn that the company's top division doesn't concentrate on human comestibles. Pet foods were its No. 1 revenue generator out of its four business units. A big reason the overall top-line figure slumped was a 5% slide in net sales for the division.

The recent slide in results isn't doing wonders for operating and free cash flow, both of which have dropped lately. For fiscal 2017, free cash flow was slightly more than enough to cover Smucker's dividend payout for the year, plus almost $438 million in share buybacks. 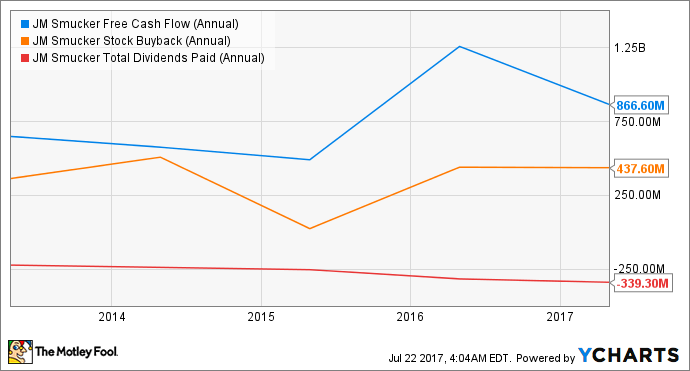 Usually, the company has more of a cushion to cover those cost items -- so although I wouldn't worry yet about its ability to sustain annual dividend bumps, I'd keep tabs on the aforementioned metrics if I were a shareholder.

Smucker's new dividend is to be paid on Sept. 1 to investors of record as of Aug. 11. It would yield a theoretical 2.6%.

The winner of the highest-percentage dividend increase for this installment is Bank of New York Mellon (BK 0.51%). The bank, a specialist in custodial services for financial companies, is kicking its quarterly distribution 26% higher to $0.24 per share.

This raise didn't come out of the blue. Sizable U.S. banks and financial-services companies are subject to the Federal Reserve's annual stress tests to determine their ability to survive dire economic scenarios. Part of the tests is the Fed's approval (or not) of the tested companies' capital allocation plans. Nearly every bank's plan was approved, including Mellon's 26% dividend raise and a share-repurchase program for up to $3.1 billion.

In Mellon's most recently reported quarter, it posted revenue of just under $4 billion, a 5% improvement on a year-over-year basis. Thanks to modest expansion in non-interest expenses, applicable net profit saw a higher rise, by 12%, to $926 million. 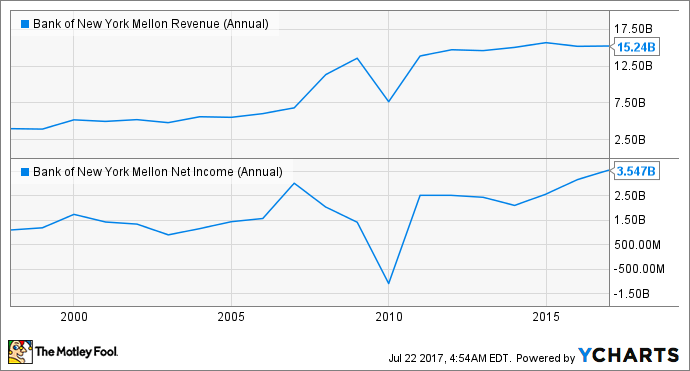 Mellon's new distribution isn't big compared with its profitability (the payout ratio would be 27%), while the bank tends to issue shares to offset the costs of its buyback program. The bank is fairly conservative and careful in how it manages its cash; considering that plus the recent growth, I think this new payout will be at least be sustained.

Mellon will hand out its enhanced dividend on Aug. 11 to shareholders of record as of Aug. 1. It would yield 1.8% at the latest closing stock price.