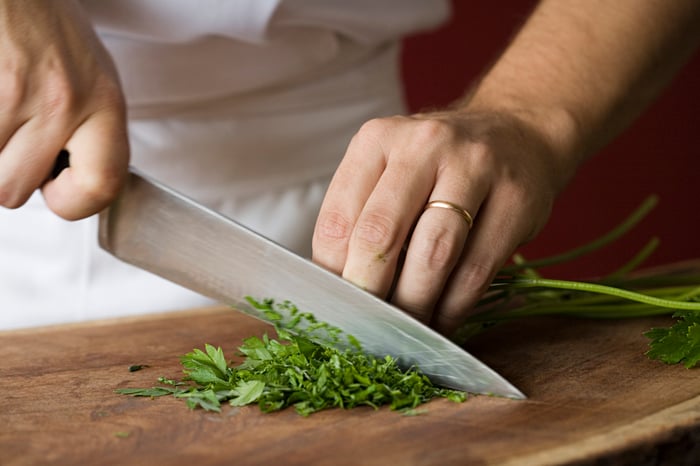 It's no secret that healthy eating is booming across the country. Organic food has gone from a niche business pioneered by Whole Foods Market to a mainstream staple featured among the nation's biggest grocers, bringing previously lesser-known foods like kale and quinoa to prominence.

Sales of organic foods in the U.S. reached $39.7 billion last year, up 11% from the year before, and they're expected to keep growing at that pace. They now make up nearly 5% of all food sold in the country.

The effect on supermarket stocks has been clear as organic grocers like Whole Foods, Sprouts Farmers Market, and The Fresh Market have suffered as larger chains hone in on their territory. But the consequences of the healthy/organic movement can also be seen in the fast-food industry.

The rise of fast casual

In many ways, fast-casual chains have grown in tandem with the popularity of healthy and organic food. Chipotle Mexican Grill (NYSE:CMG), which essentially started the fast-casual movement along with Panera Bread (NASDAQ: PNRA), may be the best example. Its recent food safety crisis notwithstanding, the burrito chain has always promised "Food with Integrity," which means meat from responsibly raised animals, local produce when available, and food without GMOs or artificial flavors and fillers.

The company brags that its kitchens have no microwaves, can-openers, and freezers, and while some critics argue that Chipotle's calorie counts belie its marketing, the customizable menu, with options such as brown rice and tofu, means the customer is in control of their calorie intake.

Chipotle's success has spawned a number of imitators across the food spectrum as several fast-casual chains have had IPOs over the last few years, including Zoe's Kitchen, Noodles & Company, and Potbelly. Smaller privately held salad-based fast-casual chains like Sweetgreen and Chop't have also found success, indicating a broad and growing market for healthy fast food.

The legacy fast-food chains have taken notice. After several quarters of negative comparable sales in the U.S., McDonald's (NYSE:MCD) results have improved lately, in part because the chain has made promises to remove human antibiotics from its chicken and start using cage-free eggs. Mickey D's is also eliminating artificial preservatives from its Chicken McNuggets along with several other items on its menu, and has taken high fructose corn syrup out of its buns.

For years, McDonald's has offered healthy options such as salads, but as consumers have become more concerned about ingredients and processing, the company is responding to demand. It's also testing its "Create Your Taste" menu, which allows customers to customize their burgers with high-end options like guacamole and sriracha mayo.

Other fast-food chains have followed suit. Wendy's announced a couple of months ago that it would also remove human antibiotics from its chicken supply, with the goal of completing the elimination by next year. Like McDonald's, it's also pledged to use only cage-free eggs.

Not all fast-food chains have been changing with the times, however, as a recent report from a consortium of consumer and food safety groups gave 16 chains Fs on antibiotic use in meat, including Burger King, KFC, Dunkin' Donuts, Sonic and Starbucks.

Still, it's clear that the trend is moving toward healthy eating, as the study noted that twice as many restaurants as the year before received passing grades. Shareholders at KFC-parent Yum! Brands (NYSE:YUM) even pushed the company to adopt stronger measures on using meat from animals treated with antibiotics, a sign that the issue is of growing concern to investors as well as consumers.

While classic fast-food meals like burgers and fries will remain popular with a certain segment of the country, fast-food and fast-casual chains that cater to growing demand for healthy and organic foods should continue to find the most success. Traditional foods chains like McDonald's are adapting for good reason.