Like many freshly public companies, Snap's first public earnings release was marred by massive stock-based compensation expenses tied to the IPO and a huge bonus that CEO Evan Spiegel earned by taking the company public. Those one-time costs won't affect second-quarter results, so Snap investors should get a clearer look at the company's performance and cost structure.

Snap has yet to prove its core ad business, and has a long way to go before it can justify its lofty valuation. Even at all-time lows, Snap appears overvalued relative to both its larger and smaller peers. Facebook (NASDAQ:FB) is more expensive in terms of book value, but has largely proven to investors that it can execute. The same cannot be said of Snap.

It's also worth noting that Snap investors are currently pricing in optimistic growth expectations: Snap's market cap is larger than Twitter's and shares fetch higher valuation multiples, despite the fact that Twitter's TTM revenue base is five times as large.

More specifically, Snap's average revenue per user (ARPU) remains quite low, at just $0.90 in the first quarter. Facebook reported worldwide ARPU of $4.73 in the second quarter. Snap's ability to grow ARPU will be directly linked to any changes in the composition of its user base. This echoes Twitter's woes, as it lost 2 million MAUs in its core U.S. market where monetization is the strongest, but gained 2 million international MAUs that aren't monetized as well.

If Snap is able to muster up solid DAU growth, that won't mean as much if user growth comes from international markets -- i.e., those that Spiegel considers "poor countries."

There's also the issue of hosting costs. Even if Snap is able to grow DAUs and ARPU, the company's cost structure is not designed to scale well since it is highly variable and primarily consists of usage fees for third-party cloud infrastructure and hosting. That fact will undermine any semblance of operating leverage in the near future. To be fair, the company has made some progress in this regard, thanks in part to renegotiating contracts with its two primary cloud vendors.

A year ago, Snap posted a negative gross margin because its hosting costs per DAU exceeded ARPU: 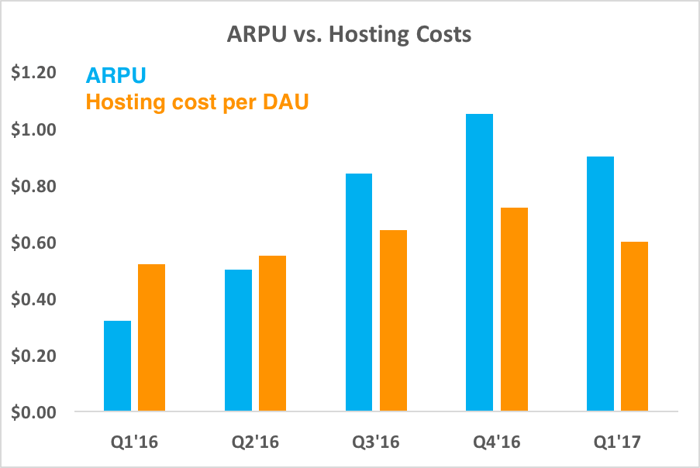 Keeping hosting costs in check will also be another important area for Snap investors to monitor closely when the company reports later this week.

Beyond User Growth, Monetization Will Be the Focus When Snap Reports Earnings This Week @themotleyfool #stocks $SNAP $FB $TWTR Next Article
Current