Please ensure Javascript is enabled for purposes of website accessibility
Log In Help Join The Motley Fool
Free Article Join Over 1 Million Premium Members And Get More In-Depth Stock Guidance and Research
By Keith Speights – Aug 8, 2017 at 11:24AM

The pharmacy giant met expectations in second quarter thanks to its pharmacy benefits-management segment.

CVS Health (CVS -0.62%) didn't disappoint the last time the pharmacy giant announced its quarterly results. The company's profit was down in the first quarter, but still beat expectations. Still, CVS Health has referred to 2017 as "a rebuilding year."

The company announced its second-quarter results before the market opened on Tuesday. Did CVS Health take another positive step in its rebuilding effort? Here are the highlights from the company's second-quarter update. 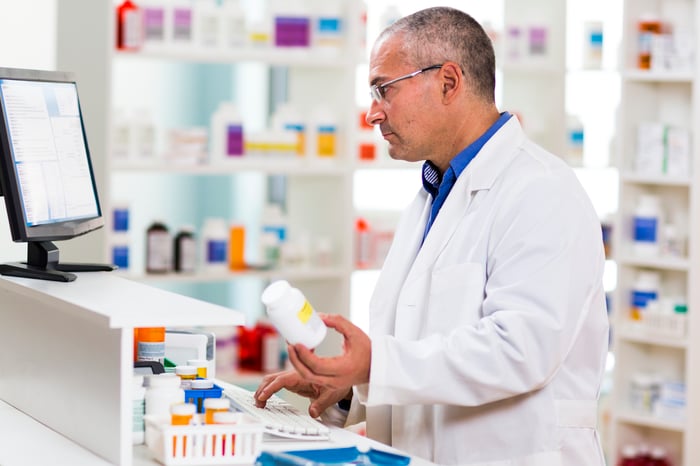 There was good news and bad news for CVS Health's top line. The good news was that revenue for its pharmacy-services segment, which provides pharmacy benefits-management (PBM) services to customers, increased 9.5% year over year, to $32.3 billion. This growth stemmed from higher pharmacy-claim volume, higher brand-drug prices, and increased specialty drug volume.

What was the bad news? Revenue for the retail/long-term care (LTC) segment slipped 2.8% year over year, to $19.6 billion. Three key factors contributed to this decline: a 2.6% decrease in same-store sales, a higher generic dispensing rate, and continued reimbursement pressure.

CVS Health's net income was significantly higher than the prior-year period on a GAAP basis. However, the improvement was mainly due to the impact of a $542 million loss on early extinguishment of debt in the second quarter of 2016.

The second-quarter results we posted today keep us nicely on pace to achieve our full-year targets. Operating profit in the retail/LTC segment was in line with expectations while operating profit in the pharmacy services segment exceeded expectations. At the same time, we have generated substantial free cash flow year-to-date and continued to return significant value to our shareholders through dividends and share repurchases. While we are pleased to report results consistent with our expectations, we won't be satisfied until the total enterprise returns to healthy levels of earnings growth."

The company's full-year guidance underscores just how much of a rebuilding year 2017 actually is. CVS Health's projections call for, at best, only slight improvement in adjusted earnings per share from 2016 to 2017. Net revenue is expected to grow by only 3% to 4%.

A big factor in the anemic earnings growth is that CVS Health is getting more sale growth from its pharmacy-services segment, but that business isn't as profitable as its retail/LTC segment. This dynamic isn't likely to change anytime soon.

However, CVS Health continues to generate very strong cash flow. And it continues to reward investors through dividends and share repurchases. Despite current challenges, CVS Health's business model still appears to be solid.