Please ensure Javascript is enabled for purposes of website accessibility
Log In Help Join The Motley Fool
Free Article Join Over 1 Million Premium Members And Get More In-Depth Stock Guidance and Research
By Dan Caplinger - Aug 9, 2017 at 8:32AM

The insurance company has been good to shareholders in the past. Will it continue?

Most Americans know Aflac (AFL 0.41%) because of its duck-filled ads on television, with the specialty insurer offering a different type of insurance coverage from what most people get through their employer health plans. Aflac also has a huge business in Japan, where it actually gets more revenue than in the U.S. and offers a similar set of unique insurance products to millions of Japanese workers. Aflac is well-known as a strong dividend stock, with impressive yields and long-term growth in quarterly payouts that have added to the success of the investment over the long run.

With that in mind, we'll assess Aflac on a number of metrics to determine whether its dividend is safe.

Aflac currently has a dividend yield of 2.1%. That's relatively close to the overall average dividend yield among S&P 500 stocks, but it's toward the low end of where Aflac has generally seen itself. Over the past five years, Aflac's yield has fluctuated between 2% and 3%, but a recent drop has sent the yield to levels not seen since 2011. Most of the hit to Aflac's dividend yield has come as a result of a big boom in its stock price rather than because of any weakness in the company's quarterly payout. 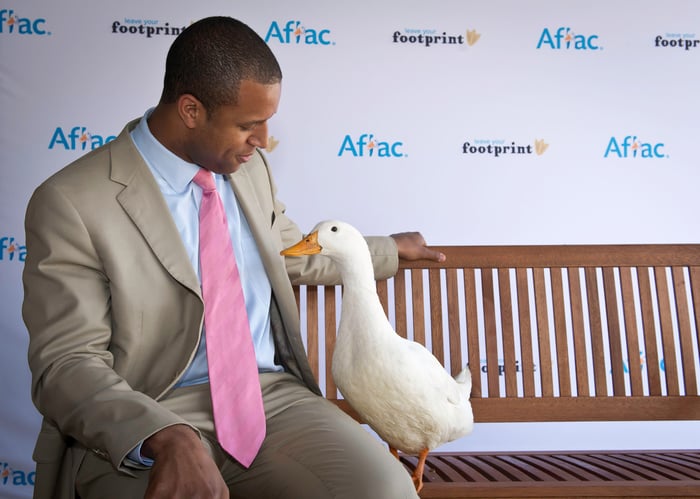 Aflac is able to sustain its healthy dividend yield without putting an undue burden on its earnings potential. Over the past 12 months, Aflac has earned more than $6 per share, but its dividends amount to just $1.72 per share. That translates to a payout ratio of between 25% and 30%, showing that the insurer isn't using much of its earnings to finance its dividends to shareholders. Even if something happens in the short run to hurt Aflac's earnings, the company has enough of a margin of safety not to require an immediate dividend cut.

Aflac has one of the most impressive track records of long-term dividend growth in the insurance industry. For 34 straight years, Aflac has made annual increases to its dividends, including the company's most recent 5% boost to its quarterly payout back in November 2016. That qualifies Aflac as a Dividend Aristocrat, a mark of prestige that indicates a commitment to growing dividends over the years. 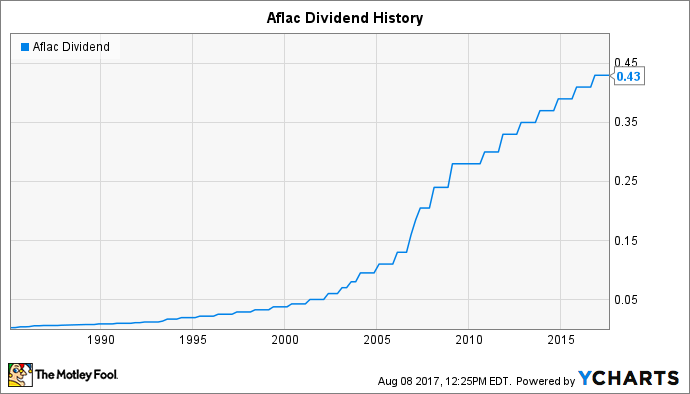 Aflac is optimistic about its plans for long-term growth. In its Japanese insurance market, Aflac said after releasing its most recent quarterly results that it thinks it can grow sales of certain popular insurance products in Japan by 4% to 6% annually, with similar growth rates for U.S. new premium sales of 3% to 5%. Those rates might not sound all that impressive, but they're enough to sustain similar-sized dividend increases indefinitely into the future.

Finally, Aflac has one potential wild card that could lead to a big boost to its dividend. The company routinely repatriates part of its profits from its Japanese operations, using the funds to repurchase stock. However, under current law, Aflac has to pay corporate taxes on its repatriated profits at a relatively high tax rate.

The Trump administration has proposed that tax rates on repatriation be reduced to encourage businesses like Aflac to bring money back to the U.S. and put it to use in expanding businesses. If that were to happen, Aflac would see a nice decline in its overall taxes. That in turn could prompt even more money into returning capital to shareholders, and a dividend boost might well become an important component of that success story for the insurance specialist.

Aflac has an impressive history of treating shareholders right with its dividend, and the company has plenty of prospects for further growth. Dividend investors can feel confident that barring an unforeseen event, Aflac will try its hardest to keep its quarterly payout rising and to look for ways to make its underlying business as successful as possible.