Apple (NASDAQ:AAPL) investors have been feeling rather confident about the company's prospects following a solid fiscal third-quarter earnings report. In particular, the Mac maker's guidance for the fiscal fourth quarter was extremely bullish, as Apple's forecast includes the possibility of a record September quarter in terms of revenue.

DIGITIMES is now reporting that all three of the new 2017 iPhone models are entering volume production, the latest sign that the "iPhone 8" (or whatever the premium version is named) could launch on time alongside the iPhone 7s and 7s Plus. The iPhone 7s and 7s Plus are expected to ship with standard LCD displays, while an OLED display would be exclusive to the flagship iPhone 8. There should be plenty of LCD models to go around, but supply of the OLED model "could fall short of demand," according to the report. Many suppliers are reporting strong sales for July, suggesting that production is ramping up. That will bode well for contract manufacturers in the months ahead, as they subsequently assemble the devices after components are purchased. 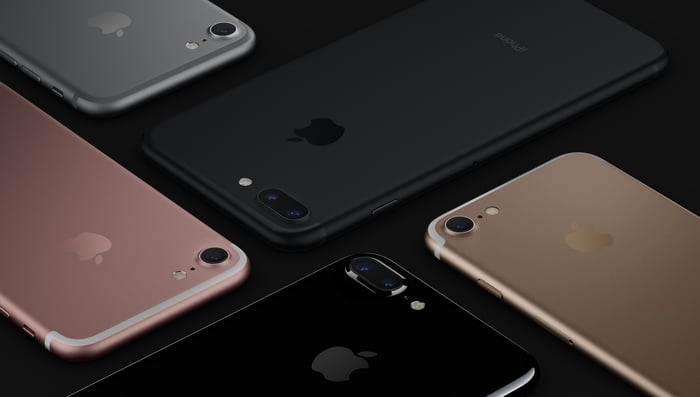 Supply constraints are not uncommon for Apple around iPhone launches. While all signs point to a timely launch for the iPhone 8 this year, the company could still struggle to ramp production in subsequent months if manufacturing yields for OLED panels remain low.

For example, Apple's guidance calls for sales of $49 billion to $52 billion, compared to $46.8 billion in revenue for fiscal Q4 2016. The iPhone 7 and 7 Plus launched on Sept. 16 last year, leaving just eight days of availability during that quarter. Apple's fiscal 2016 ended on Sept. 24, 2016. Investors don't yet know when Apple will host its September iPhone event, or when it plans on shipping the new lineup of devices, but the outlook strongly suggests that it is expecting a strong launch before its fiscal 2017 closes  on Sept. 30, 2017.

So while the guidance is encouraging, it only covers perhaps a couple of weeks. The company stopped disclosing iPhone launch sales last year, but sold 13 million units during the launch weekend in 2015. Demand should be concentrated on the iPhone 8, and if Apple sold 10 million units at the rumored $1,000 price point, it would enjoy a $10 billion weekend for that model.

September and October will be critical months. Once the device launches in September, investors will get an idea of what kind of backlog Apple is facing, which you can gauge from shipping estimates. Then Apple will report fiscal fourth-quarter earnings in October and provide guidance for the holiday quarter. (Apple only provides guidance for one quarter out and never provides full-year forecasts.)

Thus, the guidance that Apple provides in October will be extremely important for investors to keep an eye on.