Tesla (NASDAQ:TSLA) CEO Elon Musk has been busy this week, hosting an investor event in Manhattan on Monday in connection with the electric-car marker's $1.5 billion bond offering. With his characteristic showmanship, Musk brought a blue Model 3 along to the event in order to help sell the offering to bond investors. It looks like it's working.

Bloomberg reports that Tesla has now secured approximately $600 million worth of orders from investors, representing more than a third of the total proposed size, citing anonymous sources. Coupon rates have not yet been determined officially, but are expected to be "no more than 5 percent," according to the report. The broader context is that junk-bond buyers have been scooping up issues in the search for yield, even if that sometimes means compromising on an acceptable return that may not fully compensate investors for the risk they are assuming. Credit spreads have been tightening across the board, which suggests that investors may be underpricing the inherent risk -- which benefits issuers in the form of lower coupons and interest expenses.

Credit spreads have been tightening for the past year and a half. Image source: Federal Reserve Bank of St. Louis. Data source: Merrill Lynch.

Spreads are at their lowest level since the Great Recession. Bond investors have been chasing high yields. That pushes bond prices up, which subsequently and somewhat ironically pushes yields lower.

Moody's rated Tesla's offering at B3, several notches into junk-bond territory. The notes will come due in 2025. By way of comparison, a Treasury that matures in August 2025 trading slightly below par (98.7) currently offers a yield-to-maturity of around 2.2%, so if Tesla offers a 5% coupon, that would represent a credit spread of about 280 basis points compared to that risk-free bond.

Speaking of that possible 5% coupon, that represents $75 million in annual interest expenses on a $1.5 billion offering. Interest expenses have been on the rise as Tesla has been taking on more debt, including what it absorbed from the SolarCity acquisition last year. Meanwhile, the company has also been capitalizing more interest as it uses debt proceeds to fund manufacturing infrastructure investments. 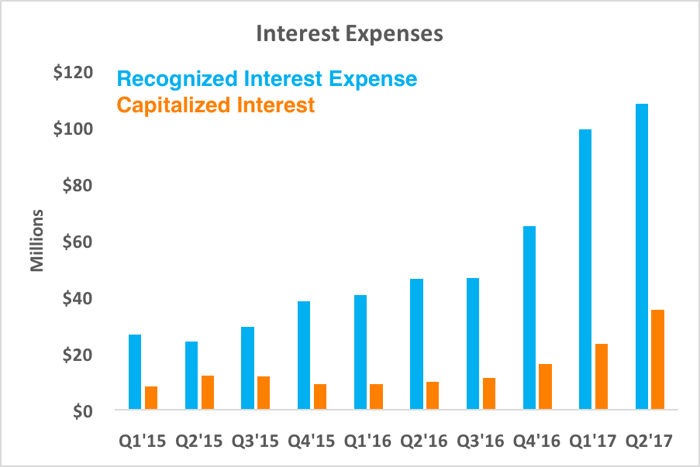 It's not clear how much of that theoretical $75 million in annual interest expense Tesla would expense versus capitalize.

A 5% coupon rate would be extremely favorable to Tesla. For a bond that matures in eight years, the company's future cash flows are far from certain, even within the next three to five years. Tesla faces immense execution risk as it attempts to ramp production to 500,000 units per year.

However, there are some encouraging signs. The Model 3 is beginning production on time -- a first for Tesla. Tesla's executive team successfully talked Musk out of creating an entirely new production platform for the forthcoming Model Y compact SUV, bringing him back from the "cliffs of insanity." Basing the Model Y on the Model 3 platform is more prudent, both financially and operationally, and will reduce overall risk associated with Tesla's next high-volume vehicle that is expected to go into production in 2019 or 2020. Legacy automakers learned the benefits of shared production platforms long ago.

Tesla just has $900 million more in paper to sell.

Tesla, Inc. Has Reportedly Sold Over a Third of Its Bond Offering @themotleyfool #stocks $TSLA Next Article
Current