Please ensure Javascript is enabled for purposes of website accessibility
Log In Help Join The Motley Fool
Free Article Join Over 1 Million Premium Members And Get More In-Depth Stock Guidance and Research
By Eric Volkman - Aug 10, 2017 at 11:05AM

Wyndham Worldwide is dividing its traditional hotel operations and its timeshare business.

Wyndham Worldwide (WYND 4.25%), the world's largest hotel operator, is preparing to split itself in two. Earlier this month, the company announced that it will spin itself off into two separate, publicly traded companies. One will consist of its hotel properties, and the other will comprise its timeshare business.

It's the old "cutting up the company to unlock value" play from the veteran lodging operator. Recent history, however, has shown that this move will not guarantee outperformance from the upstart timeshare entity. 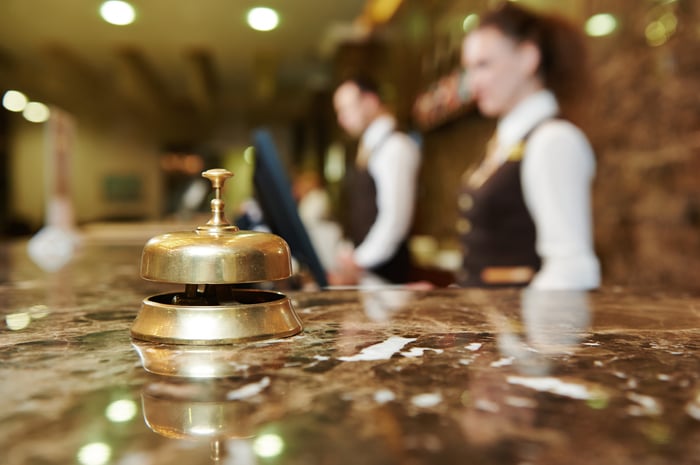 Wyndham Worldwide, which on the hotel side of things controls such familiar brands as Ramada, Days Inn, and Travelodge, is only the latest big lodger to divide itself. The companies now known as Marriott International (MAR 6.66%) and Hilton Worldwide Holdings (HLT 5.11%) got there first.

Marriott split in two in 2011, hiving off its timeshare business into today's Marriott Vacations Worldwide (VAC 2.68%). And at the beginning of this year, Hilton went one step further, chopping itself into three companies -- management entity Hilton Worldwide, hotel-asset holder Park Hotels & Resorts, and, yes, a timeshare business called Hilton Grand Vacations these days.

In Marriott's case, the timeshare business hasn't outperformed its root company in terms of headline fundamentals.

As the Hilton split was effected at the beginning of this year, we don't have such a long history to draw on.

Looking at the results from 2015, the year before the separation announcement, we see that both the parent company and the timeshare business had roughly the same profit margin, at around 12%. Grand Vacations shaved a percentage point off that figure for its 2016 result. So at this early stage, there's no great distinction in the profitability of the two companies. 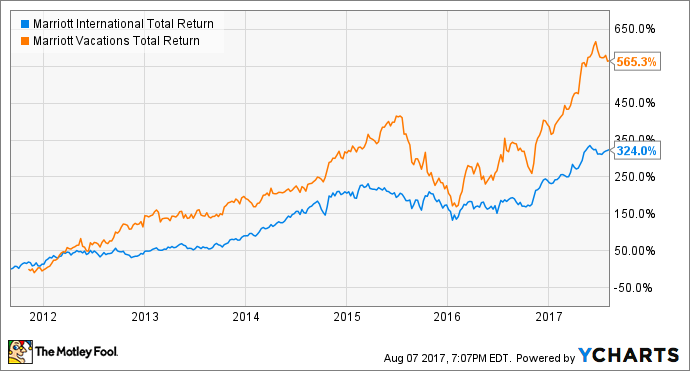 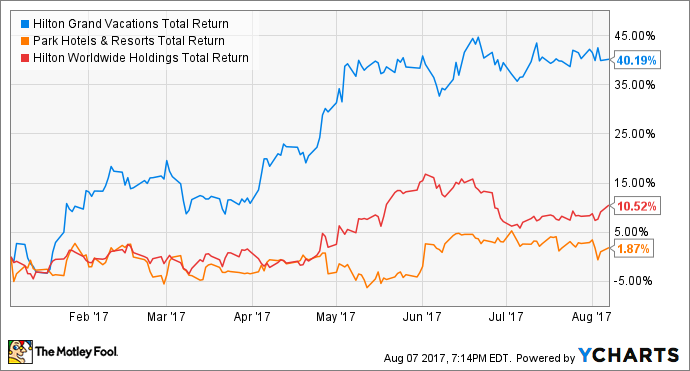 We should bear in mind that in the case of the two Marriotts, International last year wrapped up a big acquisition -- that of Starwood Hotels & Resorts Worldwide -- which helped drive down 2016 profitability compared to the previous year. Looking forward, though, analysts are projecting higher growth in per-share earnings for International from this year to next.

As for the Hiltons, and while the difference is also striking, we're looking at two very young stocks; as such, the outperformance of Grand Vacations might be due to the novelty value of a "fresh" name-brand issue on the exchange. Meanwhile, like the Marriott brothers, the average analyst EPS one-year forward growth projection favors Worldwide over Grand Vacations.

None of this means that a newly "unlocked" timeshare company can't be a good addition to a portfolio. But I'd say given what we've seen so far, they aren't obviously superior investments to stand-alone hotel operators or lodging conglomerates. So at least initially, I wouldn't get excited about Wyndham Worldwide's soon-to-be independent timeshare operator.

The Wyndham Worldwide split is subject to approval by the company's board of directors, although it will not be submitted to a direct vote by shareholders. Neither of the resulting entities has yet been named.

The company expects to complete the transaction by the middle of 2018.

America Has Spoken, and These Are Its 4 Favorite Hotel Chains
Wyndham Rides the Strength of Vacation Ownership
Wyndham Can Go Higher Yet