Department store stock got rocked today after a number of earnings reports released today failed to convince investors that the headwinds against the sector were easing. 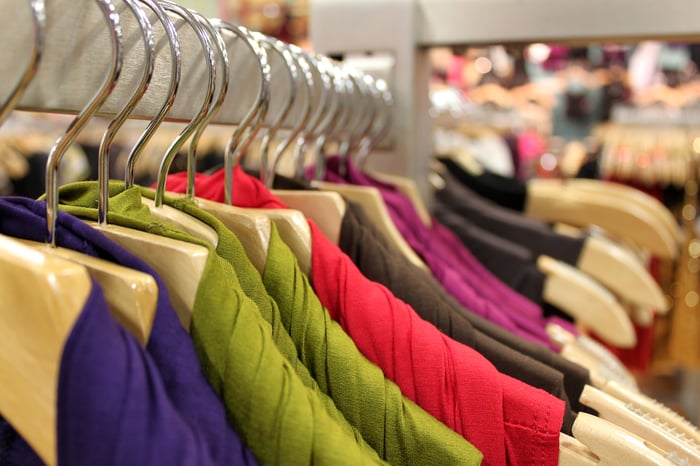 Macy's, Kohl's, and Dillard's all reported quarterly results this morning, kicking off the retail earnings season.

Oddly enough, the stocks mostly beat estimates, but investors continued to sour on the sector nonetheless. Macy's reported a 2.8% decline in comparable sales on an owned basis, an improvement from the previous quarter, and overall revenue fell 5.4% to $5.55 billion, which was better than expectations of $5.52 billion. Likewise, adjusted earnings per share slipped from $0.54 to $0.48, but that beat estimates of $0.46.

Finally, Dillard's said comparable-store sales fell 1% and overall revenue dipped 1.6% to $1.46 billion, ahead of estimates of $1.44 billion. However, the company dropped prices significantly to clear out inventory, resulting in a loss per share of $0.58, down from a per-share profit of $0.35 a year ago. Analysts had predicted earnings of $0.19, explaining why that stock is down double digits.

Macy's and Kohl's were actually up initially in pre-market trading but turned lower as sentiment shifted. The overall sell-off in the industry was surprising considering the numbers were generally better than expected. Kohl's even reported a surprising increase in profits. However, the broad-based decline in sector stocks -- which also brought down J.C. Penney (OTC:JCPN.Q), scheduled to report tomorrow -- seems to indicate that investors believe these retailers aren't doing enough to adjust to changing industry dynamics. At Macy's, for instance, the stock's decline hastened when management said it had no new real estate updates to report. Kohl's, the healthiest of the bunch, said it found some success by expanding activewear with partnerships with Nike, Adidas, and Under Armour, saying sales in that category were up in the low teens.

While moderating same-store sales declines should offer some consolation for investors, the long-term picture still remains the same for department-store chains. Americans are doing more of their shopping online and less in malls, and there's little department stores can do to change that. Retail store closings have been rampant this year, with Macy's listing 68 stores it would close at the beginning of the year, and Sears shuttering nearly 300 this year. Dillard's and Kohl's have done better at resisting that tide, but there's no question that the department industry is retrenching as stores shutter and sales decline. According to the Census Bureau, industrywide department store sales are down 4.2% through the first half of the year.

While today's numbers were mostly better than expected, the sell-off shows that the market is still largely skeptical of any turnaround in the sector. Without meaningful growth at both ends of the income statement, it's hard to see any of these stocks making a comeback.