Camping World Holdings (NYSE:CWH) reported second-quarter earnings that handily beat the market's expectations on the top and bottom lines. Revenue came in at $1.3 billion for the quarter, which generated adjusted diluted earnings per share of $0.91, far exceeding analysts' expectations of $1.17 billion in revenue and earnings of $0.68.

As of 3 p.m. EDT on the day after the earnings announcement, the stock had risen by more than 11%, indicating that investors were very happy with the company's results.

It's difficult to find anything negative in Camping World's earnings release. Sales grew 20% year over year, and net income rose by 40%. Same-store sales were up by double digits at 10.6%, and operating margins widened by 98 basis points. 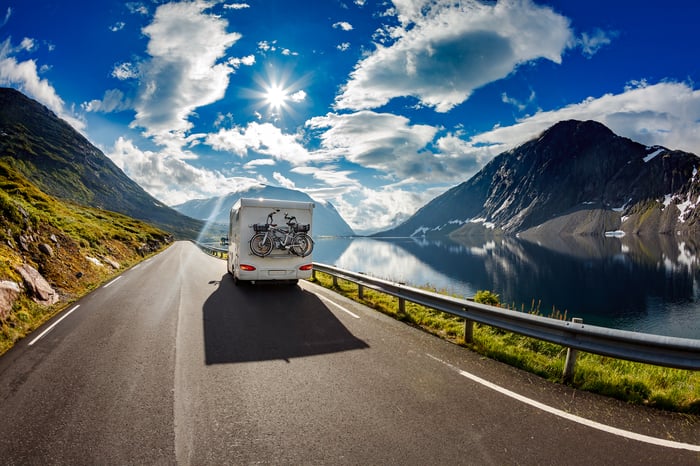 Although the average new-vehicle sales price dropped by 4.5%, new-vehicle sales rose by a staggering 38.2%, fueled by high demand and a shortage of used vehicles. Although the price drop may look like a negative data point at first glance, the drop was a healthy one, caused by increased sales of non-motorized towable units, potentially a reflection of an influx of younger customers.

The millennial generation has embraced the RV culture, seeing the value in a living space that can be moved about the country. That's not surprising given the experience-oriented nature of the younger generation.

Camping world is up by 60% since going public less than a year ago, but there could be more room to grow. After all, Millennials are just now getting into their prime earning years, and it has been estimated that the generation will be worth $24 trillion by 2020. That's a lot of spending power, and we may see more and more RVs on the road over the next few years.