The single biggest problem facing engineered biology conglomerate Intrexon (NASDAQ:PGEN) heading into the second quarter of 2017 was its dependency on small- and micro-cap companies for a significant portion of its total revenue and nearly all of its revenue growth. These companies often fail -- several that formerly accounted for large payments already have -- which puts the synthetic biology stock on shaky ground.

After Intrexon reported second-quarter 2017 earnings, it's clear that investors are still being forced to go along with the company's risky revenue machine. An astounding 58% of all first-half 2017 revenue growth over the year-ago period came from just one customer, Ziopharm (NASDAQ:ZIOP). Meanwhile, start-ups created for and by Intrexon accounted for another 54% of revenue growth during the periods.

Your math is correct: These two sources add up to 112% of total revenue growth, which means they more than made up for shrinking business elsewhere.

That should give investors pause for more than one reason, especially considering that Intrexon receives payments from dozens of customers. What's going on? 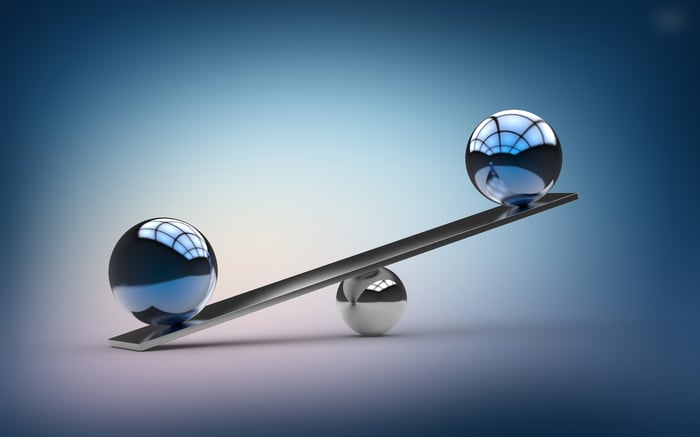 Consider the high-level financial metrics from the first halves of the last two years.

Product revenue, the least risky source of sales in the long term, actually slipped in the first half of 2017. That's not too worrisome considering the engineered biology conglomerate is still in the process of commercializing its first products (mosquito control tools, non-browning apples, and high-protein animal feed). But there's a lot of ground to make up to de-risk the business with product revenue alone.

Services revenue, which is comprised entirely from the bovine embryo business, grew at a respectable clip due to higher demand -- and did so at a gross margin of 47%. If the services grow over time as envisioned, then they could represent a sizable growth opportunity. Regulatory obstacles may be the largest hurdle in the near term.

Even still, product and services combined for only 43% of total revenue in the first half of 2017. The remaining 57% of revenue was generated from collaboration and licensing agreements, comprised of upfront and milestone payments and reimbursement for research and development services. This part of the business is not only driving growth, but relying on the riskiest sources to do so.

I previously explained each component of this segment and will continue with that categorization, which is easier for investors to digest:

That's not a very encouraging table.

Ziopharm is completely dependent on Intrexon, and it increasingly looks as if the feeling is mutual at the moment. Yet joint clinical programs between the two companies haven't even started yet.

Investors and Mr. Market are betting the house that the oncology trifecta involving Intrexon, Ziopharm, and Merck will pay off handsomely, but few appear to be considering what happens if they encounter failure. While Wall Street analysts often dismiss this concern by stating that the multiple other shots on goal will insulate investors from potential failure, the numbers to date don't support that argument.

Intrexon shareholders should be mailing thank-you cards to Ziopharm for carrying the business in the last two years. Without the biopharma collaborator, there isn't much growth to talk about.

In fact, aside from talk of world-changing potential on presentation slides and the fact that management has figured out how not to incinerate shareholder capital to fund operations (an impressive feat, to be honest), this is essentially nothing more than a money-losing contract R&D lab funded mostly by customers with no or questionable reputations. That's a harsh assessment, but it's true.

Individual investors should consider this a very speculative investment almost entirely dependent on future potential. I won't be going anywhere near it.