The online advertising world may be about to get just a little more competitive if a recent report by the Wall Street Journal proves true. WSJ said last week that Alphabet's (NASDAQ:GOOG) (NASDAQ:GOOGL) Google may soon launch a new article content platform based on its current accelerated mobile pages (AMP) platform. The paper noted that the new articles may be called "Stamps," a term that combines the word "stories" with its current AMP platform.

Stamp articles may include text, videos, and images and would load directly within search results like its current AMP articles do, but users would be able to swipe through all the content in the articles much like Snap (NYSE:SNAP) users do in the Discover section of the Snapchat app. Google hasn't confirmed this news yet, but if the company does indeed launch the Stamp idea then even more tumultuous times could be ahead for Snap's stock. Why Snap investors should care about this

Google already accounted for nearly half of all U.S. digital ad revenue in the first quarter of this year and its potential new Stamp platform could be yet another way for the company to keep mobile users on its search page, and out of apps.

Google is currently trying to fight siloed content that's being distributed by Facebook (NASDAQ:FB), Apple News, Snap, and other with its AMP articles. Adding more options for publishers (liked video) would be yet another move to keep users from opening up an app for their news fix.

Google will account for an estimated 40.7% of all U.S. digital ad revenue this year, but when it comes to display ads (anything from banner ads to video ads) it has fallen behind Facebook, and Snap is gaining some ground. 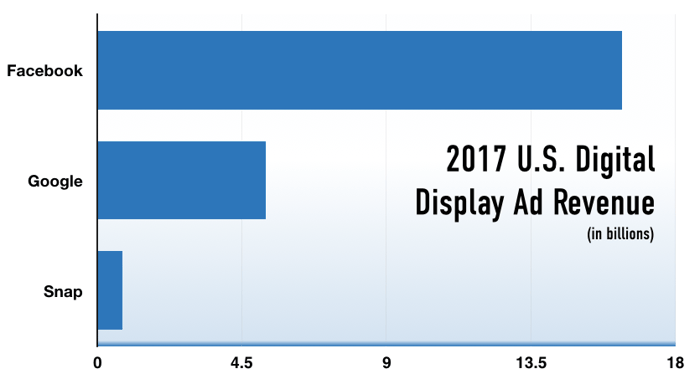 Snap is still small potatoes in the advertising business -- it earned just $149.65 million in revenue in the first-quarter -- but eMarketer expects the company to bring in $770 million in ad revenue for the full year, which would represent a 157% increase year over year.

Even if that growth happens, Snap is already facing increasing skepticism among Wall Street and investors that it can continue growing its business. The company has received at least two price target cuts from analysts this year and its stock price has plummeted about 45% since its IPO in March. Snap's stock could see even more volatility if investors see Google targeting the company specifically with a similar content platform.

Snap is a young company that's still trying to figure out the best way to make money from its users, and if Google launches a Stamp platform it might end up pulling some ad dollars away from competitors. Snap is already trying to keep pace with the popular Instagram Stories feature, which launched later than Snapchat Stories but are very similar. Instagram has continued to help drive revenue for Facebook and will account for about 20% of the company's U.S. mobile revenue this year. Advertisers with limited budgets are trying to to figure out where their ads are the most effective, and sticking with ad stalwarts like Google and Facebook look like a wise bet.

A Google Stamp platform wouldn't spell certain doom for Snap, of course. The majority of the company's Snapchat app users are in the coveted Millennial demographic and they're still very engaged with the app. But the fact remains that Snap is an unproven platform for many advertisers and some are already beginning to lose confidence in it. If Google launches a competitive story platform, then advertisers have one less reason to gamble on Snap's nascent business.