Mere days after reporting a terrible quarter, AMC divests its stake in a movie distributor.

AMC Entertainment (AMC) isn't wasting any time shedding assets. At the beginning of August, the movie theater operator previewed an ugly quarter that ended up featuring a net loss of over $176 million. To help shore up its finances, which suffer from deep indebtedness in addition to that now significant net loss, AMC promised it would unload around $400 million worth of assets.

Sure enough, several days later it announced the sale of its 50% ownership stake in the movie distribution company Open Road Films. That's the first of AMC's divestments, and it surely won't be the last. 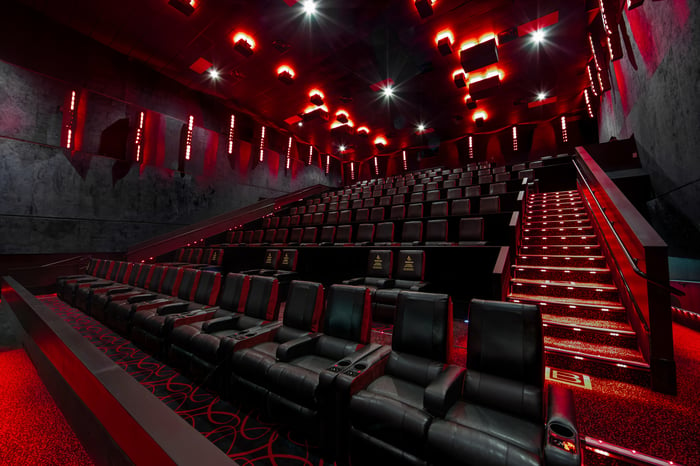 There are two main factors at work here that are roughly parallel. AMC Entertainment is majority-owned by Dalian Wanda, a massive Chinese real estate conglomerate. It grew to behemoth size in its native country and expanded abroad through acquisitions, borrowing heavily to do so.

But the government, which still controls many of the nation's lenders, has understandably become skittish about this habit lately. Earlier this year it brought the hammer down on Dalian Wanda, barring Chinese banks from lending it money to buy foreign assets.

A similar dynamic is playing out at AMC. Wanda's borrow-to-grow strategy was employed by its U.S. cinema operator. Fueled by its parent's ambition to be a big player in American entertainment, AMC grabbed complementary assets like Carmike Cinemas and European exhibitor Odeon & UCI Cinemas. Not surprisingly, AMC's indebtedness shot up to the sky.

In that awful Q2, long-term debt exceeded $4.2 billion -- more than triple what the company drew in revenue for the period -- and interest expense was a shade under $70 million. Those numbers only one year earlier were $1.8 billion and slightly over $26 million.

So it seems the twin pressures of the Chinese government breathing down Wanda's neck, and AMC's lopsided Q2 fundamentals, are clearly spurring the cinema operator to unload assets -- and quickly.

It's apparent that AMC doesn't hold anything sacred. Open Road is partially its baby; it co-founded the distributor with peer movie theater operator Regal Entertainment Group (NYSE: RGC) in 2011.

The AMC/Regal venture has had several successes with the mid-budget films it specializes in, particularly the 2016 Best Picture Academy Award winner Spotlight, which also raked in over $88 million in box office on a modest budget. It's hardly an idle studio, with four films slated for release between now and the end of this year.

The Open Road sale isn't going to bring in anywhere near what AMC needs to make its goal. The buyer of the stake, Tang Media, is paying $28.8 million, which is only 7% of the $400 million AMC is ultimately seeking to raise from sell-offs.

So, like the busy summer movie season, we should anticipate a period full of asset sales from the cinema company. It's now the no. 1 theater company in the world and in America (ex-partner Regal is No. 2 on these shores, by the way). As such, AMC has plenty of assets to divest; it would stay on the top even if it sold a clutch of its over 8,200 screens.

Either way, the concession stand is now open and AMC is going to try to sell plenty of candy. Keep an eye on this space for updates as to who's buying and what's being sold.