NVIDIA Corporation (NASDAQ:NVDA) stock has been an unquenchable fire lately, and with good reason. The company has consistently put up year-over-year growth numbers that would make most companies envious -- over 50% revenue growth on average in each of the last three-quarters, and triple-digit net income growth for five successive quarters.

Those financial results have driven the stock to newer and greater heights, returning over 700% in the last three years. In most instances, investors would be giddy over a company that could grow revenue by 56%, but with the torrid growth NVIDIA has shown lately, investors' appetite for growth became insatiable, and at some point, even a great report wasn't good enough, and the stock initially fell by 7%. 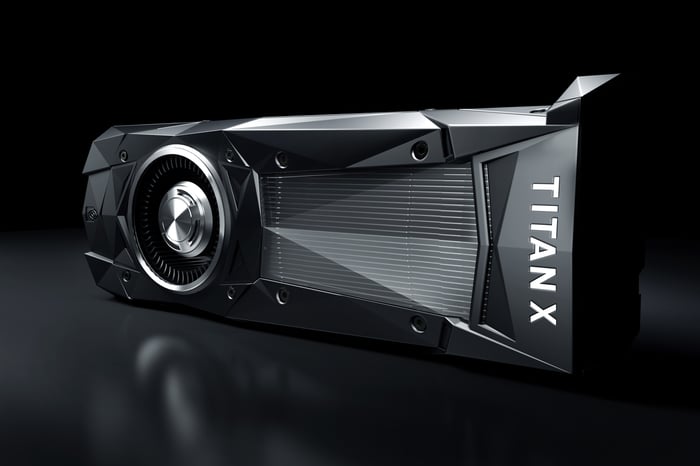 For the just completed quarter, NVIDIA produced a record $2.23 billion in revenue, up 56% year over year and continuing its impressive streak of wins.

Revenue from its all-important gaming segment grew to a massive $1.19 billion, representing a 52% increase over the prior-year period. It's gaming segment accounted for more than 53% of total revenue.

You can't spell 'gain' without AI

Revenue from NVIDIA's data center segment, which houses its artificial intelligence (AI) applications, increased a massive 175% and grew to 19% of total revenue. This marked the eighth consecutive quarter of sequential gains and the fifth consecutive quarter of triple-digit year-over-year increases. Founder and CEO Jensen Huang laid out the opportunities presented by AI in both the data center and auto segments:

Datacenter revenue increased more than two and a half times. A growing number of car and robot-taxi companies are choosing our DRIVE PX self-driving computing platform ...

Nearly every industry and company is awakening to the power of AI. Our new Volta GPU, the most complex processor ever built, delivers a 100-fold speedup for deep learning beyond our best GPU of four years ago. This quarter, we shipped Volta in volume to leading AI customers. This is the era of AI, and the NVIDIA GPU has become its brain. We have incredible opportunities ahead of us.

They drive a hard bargain

NVIDIA again produced record revenue in its auto segment, which increased 19% year over year to $142 million. The company pointed out that several major automakers and automotive suppliers had chosen NVIDIA DRIVE PX for their self-driving car programs, adding to the growing list of car and truck makers that have adopted the platform.

This follows an announcement that NVIDIA had entered into a far-reaching partnership with Chinese search giant Baidu, Inc. (NASDAQ:BIDU) that includes not only autonomous vehicles but also cloud computing and consumer devices. Baidu has committed to open-source its self-driving car program with DRIVE PX at its heart, and it has since garnered more than 50 partners to advance its development.

NVIDIA expects revenue of $2.35 billion in the current quarter, which would produce a year-over-year increase of 17%, and while that would represent a significant deceleration of growth rate exhibited over the last year, it's primarily the result of much tougher year-over-year comps.

Investors could be excused for wondering how growth in excess of 50%, that exceeded expectations, would translate to a drop in stock price. However, to put this in perspective, even after the drop, the stock price is back to where it was less than four weeks ago. Investors would do well to remember that NVIDIA GPUs are at the heart of a paradigm shift in AI, and the sector's performance this quarter was strong. Any short-term hiccups in the stock price should be ignored.