Rewind twenty years and people would think you were crazy looking for dividend stocks in the technology sector. Not only were firms pouring all of their cash into growth opportunities, but it was far too early in the tech revolution to be confident enough in future cash flows to offer a dividend.

But that was then, and this is now. With the onset of the capital-light software-as-a-service (SaaS) business model, many of today's top software companies are finding that they have far more cash than they know what to do with. That makes them ideal candidates for dividend investors. 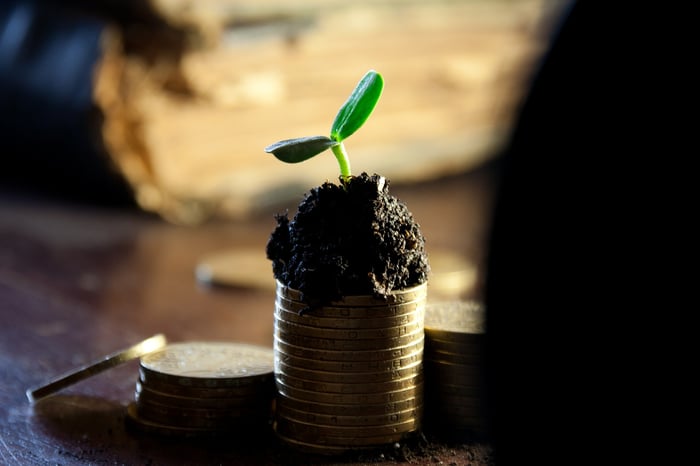 But one stands head and shoulders above the rest: Microsoft (NASDAQ:MSFT) and its current 2.2% yield. Read below to see why this is such a solid software dividend to buy.

Before we dive into the dividend itself, let's tackle the primary concept you should be focused on: Microsoft's sustainable competitive advantage, or "moat." The company actually has three different divisions:

Here's how much each division contributes in terms of sales and gross profit.

I include this table to make one thing clear: though the company manufactures physical goods and runs Internet services like LinkedIn, it is the company's software -- mostly from the Office Suite, but also via Windows -- that is the high-margin income driver.

The Office Suite alone has a very powerful moat around it: high-switching costs. Normally, I would argue that this couldn't be that true with a word and data processor, but Microsoft's bread-and-butter -- Word and Excel -- have truly stood the test of time. Competitors have come out with their own versions, but we were all raised on this system, and are increasingly loath to switch.

The high-margin cash that this brings in allows the company to experiment with a number of other fronts, including its cloud-based services and a number of -- sometimes failed -- physical products. These are expensive experiments that the competition can't always afford to undertake. While Microsoft's success rate here might be meager, all it needs is one or two of its ancillary bets, like Azure or the purchase of LinkedIn, to take off to meaningfully move the profit needle.

Some might look at Microsoft's stock return over the past decade-plus and complain that money would have been better spent in other up-and-coming tech players. While that might be true, hindsight is always 20/20; everyone thinks they knew who the next tech giant would be, but few put their money where their mouth was fifteen years ago -- meaning that we're all really deluding ourselves.

It's true that since February 2005 -- when it started offering its quarterly dividend -- Microsoft has returned a modest 174%, only overtaking the S&P 500 within the past 18 months. But once we factor in the effect of dividends, that lead widens considerably. 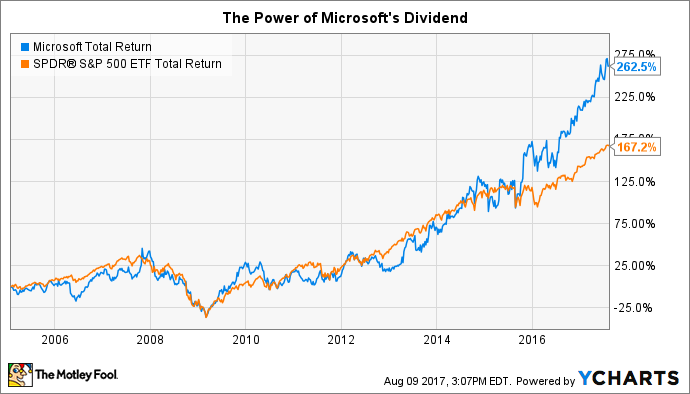 Just as important, the dividend is very safe. Over the past year, the company has brought in $31.4 billion in free cash flow and only had to use 37% of that cash on its payout. That means that the dividend is both very safe and has lots of room for growth.

To give you an idea of how that dividend growth can affect a long-term holding, consider the investor who bought shares back in 2005. At the time, they got a dividend yield of roughly 1.2%. But if those shares were still held today, they would be yielding 6% for 2017. That's serious cash flowing back into your pocket -- and there's far less risk involved with Microsoft than other technology or software players.

Admittedly, I have yet to put my own skin in the game. As someone who still has over three decades until traditional retirement age, I have focused more on growth opportunities. But I have been very impressed with the pivot to Office 365, and believe it could compel me to start buying into the company in the near future. It's a move I think you should consider as well.