Kevin Plank founded the performance sports apparel company, Under Armour (NYSE:UA) (NYSE:UAA), on an idea that he had as a walk-on football player at the University of Maryland. The story goes that the cotton T-shirt Plank wore under his uniform would hold so much sweat, he felt it slowed him down. He was determined there had to be a better way. Over twenty years later, that idea has grown into a $5 billion global business that competes against industry giants Nike and Adidas.

Plank has grown Under Armour on grit, great brand marketing, and partnering with wholesale sports retailers. The business has stumbled as of late, partly due to what has made it successful in the past. Read on for a history of the company and how that plays into the situation the company finds itself in today.

The early years, humble and hungry

Kevin Plank attended Maryland University and earned a Bachelor's degree in business. Selling Valentine's day roses to his classmates gave Plank a taste for running his own business. His freshman year he sold 100 dozen roses, and by his senior year he had 50 employees and sold over 10 times the number roses. 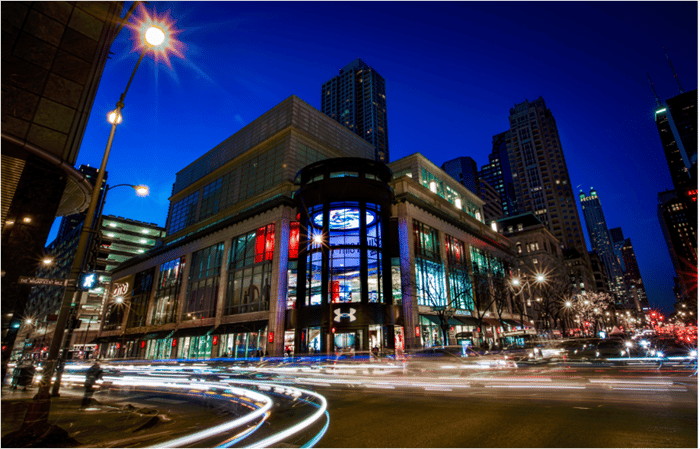 After his successful senior year Valentine's day sale blitz, the 22-year-old Plank started to do research and development work on the T-shirt that launched his billion dollar business. He headed to the garment district of New York to learn all he could about making and selling clothing. He was able to make enough prototype T-shirts to send to his friends and former team mates who had made it to the NFL. He then packed up the rest of the samples in his car to visit the equipment managers of the southern Atlantic Coast Conference (ACC) colleges to try to sell his T-shirts. Eventually, Plank got a call from the Georgia Tech equipment manager who ordered 350 shirts, and his business was off and running.

As word got out, about the company's great performing products customers would call and ask for products he didn't have: long sleeves or cold-weather gear. Plank would take the order and figure out how to deliver. Under Armour continued to capitalize on the word of mouth recommendations of Plank's growing network of NFL football players. So much so that the company was offered the license for NFL Europe for free. The company gained additional recognition with a prominent product placement in the 1999 movie, Any Given Sunday, and its first commercial with Plank's longtime friend and NFL linebacker, Eric Ogbogu, cheering his fellow teammates to "protect this house." Prominent athletes play a key role in marketing the company's products to this day.

As the Under Armour brand gained widespread recognition, Plank was able to grow his performance T-shirt business into a $281 million revenue, performance sports apparel machine by 2005. The company went public in November of that year.

Looking at the company's financials from 2005 gives you an idea of why the company has grown so fast in the first 10 years of being a public company. The business was primarily a U.S. Wholesale apparel business with customers like Dick's and Sports Authority that had considerable national coverage, which allowed the company to get broad distribution with only a few customers. The company's revenue was driven primarily by performance apparel products, and footwear wasn't introduced until the following year.

This formula was a great way to scale the Under Armour Brand. Under Armour focused on producing great "shirts and shoes", and wholesalers would do the heavy lifting of managing the physical retail space and resources. As a result, the company grew 14 times in revenue over the next 10 years.

Everything was going right for Under Armour. The company had a large base of consistent North American wholesale growth which allowed the company to invest in its international business, its e-commerce business, and enabled it to buy three fitness app companies. In September 2015, Under Armour held an investor day and touted that the company would reach $7.5 billion in revenue by 2018. This was a bold promise considering the company had just crossed the $3 billion sales mark in 2014. It was then that things started to unravel for the Wall Street darling and the stock has tumbled more than 60% since. 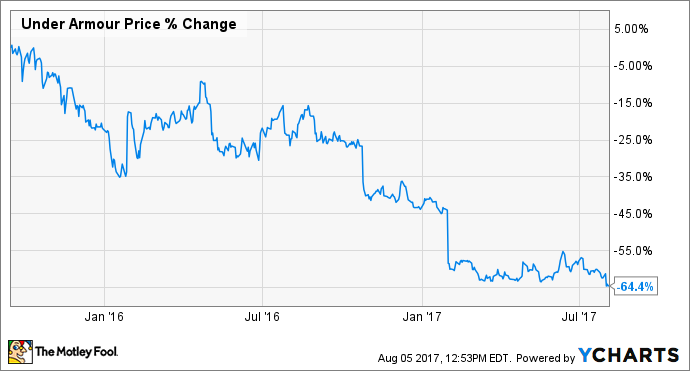 The competitive North American market and the company's dependence on domestic wholesale continues to challenge Under Armour even in its most recent quarterly release. The most recent quarter shows that the company is still significantly dependent on the business model it had in its IPO year: The wholesale channel accounted for 60% of revenue, the North American region was 76%, and apparel products were 63%. On the plus side, direct-to-consumer, international, and footwear continue to be large opportunities for the company to grow. It's also important to note that Under Armour is still very small compared to the leading athletic apparel competitors, Nike and Adidas. 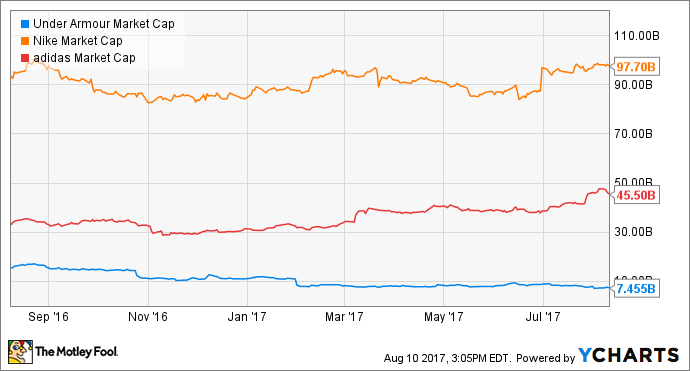 The company recently hired Patrik Frisk as the chief operating officer for the company. Patrik brings to the company over 30 years experience running global clothing brands. Frisk shared his perspectives as a newcomer to the company and industry veteran in the most recent earnings call.

...what I will underscore is the absolute singlemindedness of this team, the culture and the DNA. The relentless pursuit of innovation, the attention to detail and the outright grit that goes into making all athletes better permeates from every corner of what this company does, and driving it is an infectious, authentic and entrepreneurial energy unlike anything I've experienced before.

Frisk's observations from inside the company align with my experience from the company's recent annual shareholders meeting, where I came away with the belief that the company and its management team wasn't making excuses, and was as committed as ever to getting its business back on track for shareholders. But in order for that to happen, the company has got to move beyond what has made it successful in the past.