We will never have another superinvestor quite like Warren Buffett. Working out of the same modest Omaha digs he's had for decades, exuding an "aw-shucks" persona you can't help rooting for, and able to boil down immensely complex topics into soundbites that somehow capture all of the relevant information, he has been a transformative figure.

Let's not forget, too, that he's absolutely hit the ball out of the park when it comes to his stock-picking prowess. Since 1965, shares of Berkshire Hathaway have returned 2,150,000%. To put that in perspective, a modest $1,000 investment back then would be worth over $21 million. If you put that in the equivalent of an index fund, it would be worth just $126,000.

Yet that doesn't mean he picks every single winner. In fact, though it's returned an astounding 1,750% since going public in 2010, chances are Buffett would have taken a pass on Tesla (NASDAQ:TSLA) -- and would continue to. 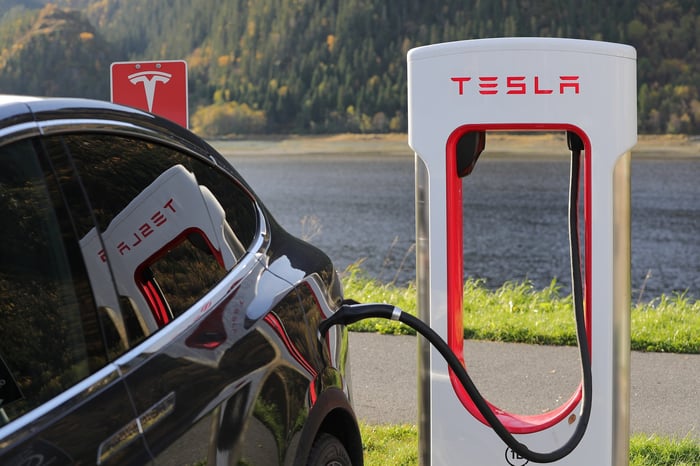 "In business, I look for economic castles protected by unbreachable moats."

When Buffett's investing acumen is combined with the extensive teachings of Berkshire co-director Charlie Munger, one thing becomes abundantly clear: Moats matter above all else. Companies that have truly sustainable competitive advantages -- or "moats" -- are the compounding machines that keep customers coming back for more year after year, while holding the competition at bay for decades.

Tesla's moat comes in two forms: its brand, and the effort toward vertical integration by way of its Gigafactories.

No one would dispute that Tesla has a very strong brand. As the first mover in electric cars and run by what I would argue is the world's greatest artisan in Elon Musk, the brand is wildly popular. But the true test of brand strength is time: The only way to differentiate between "fad" and "lasting brand" is time, and Tesla simply hasn't been around enough to have what Buffett would qualify as an "unbreachable moat."

Gigafactories, on the other hand, could represent an important differentiator. By controlling the manufacturing of its parts -- especially batteries -- from start to finish, Tesla could create a meaningful cost advantage. But like the strength of the company's brand, it's simply too early in the game to know whether what the Gigafactory turns out will be more valuable than what the competition produces.

A balance sheet in peril?

Buffett loves companies that spit out cash and provide tons of free cash flow. But that just isn't the case at Tesla. While the company has blown past even the wildest predictions from five years ago, it remains in a tenuous position.

Currently, Tesla has $4.5 billion in cash, versus $7.2 billion  in long-term debt. That's not bad at all, but we need to remember that being an automaker is an incredibly capital-intensive undertaking. Over the past 12 months, free cash flow has been negative to the tune of $1.9  billion. Some analysts have claimed that will cause the company to lose  a "global arms race" when it comes to funding. And Musk recently announced that Tesla was going to take on $1.5 billion more in debt to fund the manufacturing of the Model 3.

No margin of safety

For all of his success, Buffett is also keenly aware that he can and will be wrong about his stock prognostications. That's why he attempts to buy stocks that have a "margin of safety" built into them.

In other words, Buffett likes buying stocks that are trading for significantly less than he believes they're worth. That way, if he's wrong, his downside is limited and he could still come out ahead -- even if only marginally so.

There are lots of arguments that could be made about Tesla's future, but no one would argue that this is a cheap stock. By almost every metric, it is very expensive -- trading for almost 6 times sales, 12 times book value, and 56 times  expected earnings -- for fiscal 2019.

All of that being said, that doesn't mean Tesla is a bad stock to own. There are as many ways to succeed in the stock market as there are investors. I own shares myself, though they make up an admittedly small portion of my portfolio, as I, too, share some of the same hesitance that Buffett probably does.