Please ensure Javascript is enabled for purposes of website accessibility
Log In Help Join The Motley Fool
Free Article Join Over 1 Million Premium Members And Get More In-Depth Stock Guidance and Research
By Chris Neiger - Updated Mar 2, 2018 at 8:12AM

The artificial intelligence market could be worth $46 billion by 2020 -- here's how to benefit from it.

There's a lot of potential for investors in the artificial intelligence (AI) market. Myriad companies -- like NVIDIA Corporation (NVDA -2.46%) and Alphabet's (GOOG -2.57%) (GOOGL -2.45%) Google -- are betting on a variety of AI segments, including data processing, deep learning, machine learning, driverless cars, etc. that all contribute to  AI's growing market potential -- which is estimated to be worth $46 billion in just two years.

So, let's take a quick look at a few things investors should know about AI, including some key areas to invest, which companies are leading in the space, and why you should take the long view with any AI investment you make. 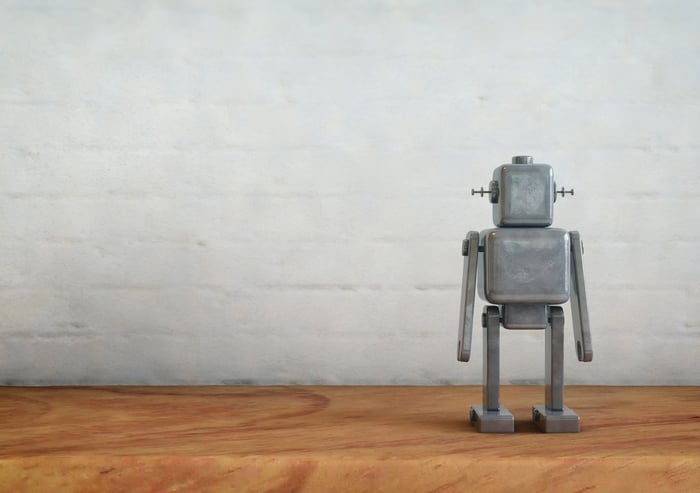 Determine which industry to invest in

Artificial intelligence can seem like a very abstract idea to a lot of people, so let's demystify it just a bit. If you've ever tagged a friend in a Facebook (META -1.64%) photo or asked Siri or Amazon.com's (AMZN -2.49%) Alexa a question, then you've interacted with a type of AI technology.

Amazon not only uses AI for it Alexa-powered devices like the Echo, but also for its lucrative Amazon Web Services (AWS) cloud computing unit. The company has added machine learning services -- a type of artificial intelligence that allows programs to learn based on past information -- to AWS, including natural language processing, speech generation, and image analysis.

Those are a few examples of AI being used in software, but AI investments aren't just relegated to that segment. Investors can also bet on more tangible (literally) investments like graphics processors. NVIDIA's graphics processing units (GPUs) are powering some of the most sophisticated AI tech for Google, Facebook, and Amazon, and are the brains behind transformative driverless car technologies.

NVIDIA's Drive PX Pegasus is the company's latest AI supercomputer for self-driving vehicles. The GPU-maker already has 225 companies developing on the Drive PX platform and 25 of them are developing fully autonomous robo-taxis, according to NVIDIA.

NVIDIA has quickly become a rising star in the AI space primarily because its graphics processors have the potential to tap so many AI markets. Here's a breakdown of what NVIDIA sees at its primary artificial intelligence markets, along with its total addressable market estimate in each:

Remember to be patient

The artificial intelligence market is expected to be worth $46 billion by 2020, but many investors will likely need to stay patient as their particular investing segment takes shape. For example, if you invest in NVIDIA because its graphics processors are likely to power many driverless cars, you should keep in mind that it's likely going to take another two decades before fully self-driving cars are ubiquitous.

PricewaterhouseCooper says that AI will contribute up to $15.7 trillion to global GDP by 2030. If that proves true, then some AI investors could make some massive gains between now and then -- but they'll have to be patient and likely stomach a few market dips before we reach that point.

Many tech investors are often looking for disruptors that can upend the status quo in a particular industry. But with AI, the market is still so young that it's best for investors to focus on which companies are leading in the space right now.

I've already mentioned a handful of them above, but let's focus our attention on Google for just a minute. The company has already purchased at least 20 artificial intelligence companies over the past few years, more than any other company, including Microsoft, Apple, and Intel.

Last year, Google CEO Sundar Pichai said that the company is making, "An important shift from a mobile first world to an AI first world." Google's parent company, Alphabet, has nearly the entire gamut of the AI industry covered and has built its own AI servers, implemented AI software into its products and services, and uses it for its Google Assistant home speaker. The company is also on the second version of its own AI chip that it developed in-house. Google knows that AI hardware and software will be a big part of nearly every major computing system in the near future, and it's planning accordingly right now.

Remember there's no sure thing

As inevitable as AI's market growth seems, investors should remember that there's no guarantee that AI will take off for any of these companies. I certainly think there are plenty of indicators that AI will be huge, but that doesn't mean that NVIDIA or even Google might not stumble in a way that hurts their AI-earning potential.

Additionally, investors should remember that artificial intelligence software can be applied to just about any sector, so it's best to narrow down AI investments to a handful of categories that you feel comfortable with, and in which you fully understand the business.