So far, 2017 hasn't been a very good year for movie theater investors. With the all-important summer blockbuster season winding down, moviegoers simply haven't found a compelling reason to venture out. The U.S. box office is down over 4% so far this year -- even though the average ticket price has increased by 3%. This year's slate of movies were big on budget and small on appeal, and the dwindling number of ticket-buyers has sent exhibitor stock prices plummeting, though some have managed better than others.

The situation is much more complex than fewer people in the seats, however, and investors are left with a quandary: Are movie theater stocks on the verge of a stunning reversal, or is there more pain to come? 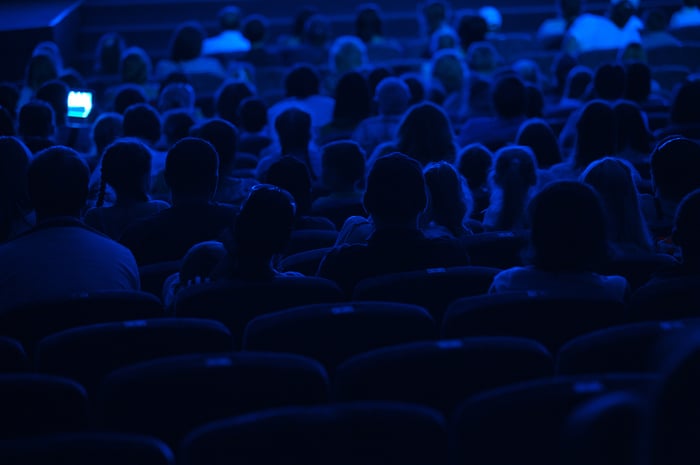 Illustrating an industrywide problem, shares of AMC fell an astonishing 27% to record lows after it warned of a dramatic quarterly loss that far exceeded even its own tepid expectations. The company reported a 3.3% year over year decline in box office and a 4.4% drop in its U.S. market.

Reports that state-run Chinese banks have been warned against providing financing for AMC's majority owner, Dalian Wanda Group, probably exacerbated the stock's precipitous fall. AMC has since provided assurances that Wanda had no part in its recent acquisitions, which were funded entirely by cash on hand and corporate borrowings from U.S. and European banks.

AMC isn't the only exhibitor feeling the pain. Shares of IMAX fell 8% after the company reported a 4% year-over-year revenue decline and a 17% earnings-per-share drop from the prior-year quarter. Shares of Regal fell 5% after the company revealed that revenue declined 3% year over year and net income plummeted 30%. Cinemark saw the best results, reporting flat revenue and earnings that fell by 5%. 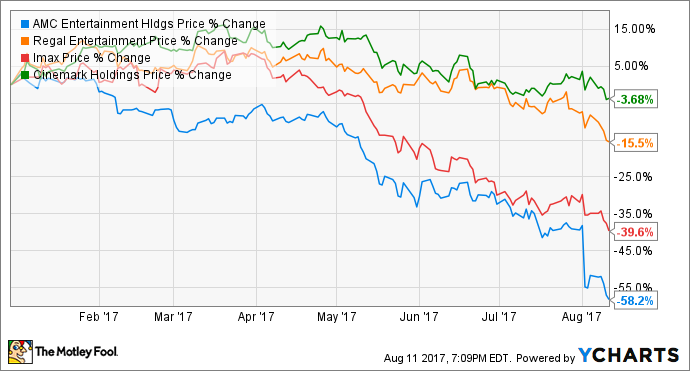 A number of factors have been blamed for flagging movie attendance, from escalating ticket prices -- which have risen an estimated 12% in the past five years, to the stay-at-home habits of millennials, the proliferation of the small screen, and streaming options from providers such as Netflix, Inc. (NASDAQ:NFLX).

Netflix recently passed 50 million domestic subscribers, out of over 100 million worldwide. The company has been spending heavily on original content, with an expected $6 billion allocated to programming in 2017. Many of its shows have been lauded by critics and fans alike, and quality content at home trumps mediocre content at the theater, especially considering the cost. According to the Motion Picture Association of America (MPAA) the cost for a family of four to go to the movies is $35, compared with as little as $8.00 per month for Netflix.

The window is cracked

The ongoing tug-of-war between exhibitors and Hollywood studios to shorten the traditional 90-day windowing period is also probably contributing to the decline. While theater owners have been loath to make changes, studios have been pushing to make movies available in homes within 30 to 45 days, albeit at higher prices.

Many believe that such a move would cause an immediate and irreparable decline in movie attendance, as consumers gravitate to the new premium video on demand (PVOD) model. Domestic movie attendance has deteriorated since it peaked at 1.6 billion moviegoers in 2002, declining 21% to 1.32 billion in 2016. Exhibitors fear that further shrinking of the window will decimate profits and mark the end of theaters as we know it. 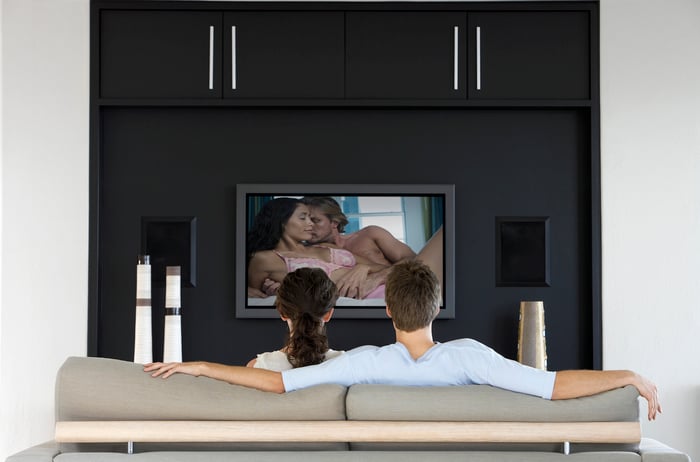 It's important to note that naysayers have been predicting the death of the movie theater for some time. Consider this quote from U.S. News & World Report, cited by The Hollywood Reporter: "Three-fourths of [those] interviewed are spending more evenings at home now. Slightly more than half are going to the movies less often, although formerly they were confirmed and in most cases very heavy moviegoers."

While you might think this is an assessment of the current state of the industry, it dates from 1955, discussing the disruptive effect of television on the theatrical landscape. Similar assertions predicting the end of cinema followed the debut of cable TV, the introduction of VHS tapes, and the advent of digital downloads. Each new innovation in home entertainment has been seen as foreshadowing the death of theaters, and it hasn't happened yet.

The experience is improving

While fundamental shifts and new disruptions are happening in the space, exhibitors are not standing idly by. The industry has undertaken numerous initiatives to improve the experience for moviegoers. Stadium-style seating and luxury recliners with vastly improved sight lines are replacing the cramped seats of yesteryear.

Digital projectors and sound have elevated the overall quality of the presentation. Premium large-format screens such as those in IMAX theaters have become staples for tentpole fare. Exhibitors are also banking on upgraded food concessions and the addition of alcohol to the menu to lure consumers out of their homes.

While the recent drubbing in stock prices might lead you to believe the end is imminent, history reveals that these fears are rekindled with every weak slate of movies. It isn't the first time the death knell has been sounded for cinema, and it won't be the last.

Like disruptive innovations before it, streaming video from the likes of Netflix isn't going to mark the end of theaters, though it has forced them to step up their game. Reports of the death of theaters has been greatly exaggerated, and investors should act accordingly.

Movie Theater Stocks: Due for a Turnaround or Dead in the Water? @themotleyfool #stocks $NFLX $IMAX $CNK $AMC Next Article
Current