That's one reason Clean Energy Fuels has been recalibrating its business away from its previous vision, called America's Natural Gas Highway, and focusing more bandwidth on building and supplying refueling stations for municipal and private fleets. The company still generates most of its revenue from the volume of fuels sold, but the mix has changed, especially with the recent renewable fuel asset sale to BP.

Given some of the changes recently and clearer pathway for growth, let's revisit how Clean Energy Fuels Corp. makes most of its money. 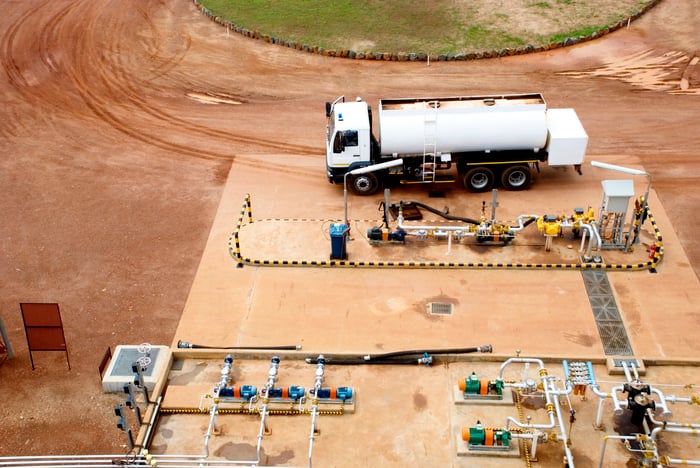 The company is still clearly the leading natural gas transportation fuels company in the United States. At the end of June, it counted nearly 1,000 fleet customers that operated 46,000 natural gas vehicles. Clean Energy Fuels owns, operates, or supplies 575 refueling stations across the United States and Canada.

While the company generates revenue and income from selling compressors and building refueling stations, those are one-time transactions. The long-term opportunity comes from supplying stations with natural gas fuels each and every year. Operating performance through the first half of 2017 bears that out:

Fuel sales comprised 80% of total revenue in the first half of this year. Everything else -- compressor sales and station construction -- made up the remaining 20%. Non-fuel services and revenue sources will be more volatile over time, since the timing of transactions can greatly impact financial performance during any given period, which has been the culprit of year-over-year revenue declines for those categories thus far in 2017.

The year-over-year drop in fuel sales was impacted by slightly more troublesome factors that investors should put on their radar for future periods.

For instance, the federal alternative fuels tax credit, which the company refers to as the VETC, expired on the last day of 2016. It provided a $0.50-per-gallon tax credit for CNG and LNG fuels and provided a significant cost-free revenue stream. While in the past the tax credit has been retroactively reinstated up to one year after expiring, upcoming tax reform makes its future more uncertain.

The company sold its renewable fuels production assets to BP to reduce operating costs. However, that will also reduce the amount of renewable fuel tax credits -- in the form of renewable identification numbers (RINs) and low carbon fuel standard (LCFS) credits -- from its Redeem brand of renewable natural gas. Losing these credits can have a significant impact on the effective price per gallon of fuel received.

Consider the year-over-year changes in the program from the first halves of the last two years:

While VETC has been broken out as a separate revenue category, both renewable fuels tax credits are included in the "volume related" revenue line. So, although volume related revenue dropped 1.9% from the first half of 2016 to the same period this year, most of that was driven by the steep reduction in LCFS credits received in 2017.

Indeed, Clean Energy Fuels increased the volume of fuel sold in the first half of 2017 by 13.1 million gallons, or 8%, compared to the year-ago period.

The asset sale to BP came with the trade-off between reduced operating costs and reduced revenue from lost renewable fuels tax credits, which may have been overlooked at the time the divestiture was announced. I certainly didn't consider the impact it would have on operations.

On the whole, I would still expect the reduction in operating costs to offset the unwanted side effects of reduced fuels revenue over time. Nonetheless, considering that fuel volumes sold dictate how much money Clean Energy Fuels makes in a period, and the fact that tax credits play a significant role, this is something investors will want to monitor in the next few quarters.

How Clean Energy Fuels Corp. Makes Most of Its Money @themotleyfool #stocks $CLNE Next Article
Current