The latest earnings season is fading like a hot August sunset. As we're now moving out of the period, we're seeing fewer dividend raises from noted companies. Typically, what lies ahead is a fairly inactive few months until the fall earnings season.

But then again, this is 2017, a year chock-full of dividend increases. So we should expect at least a lift or two during even the sleepiest weeks in these dog days.

Anyway, let's have a look at three notable raisers from last week. 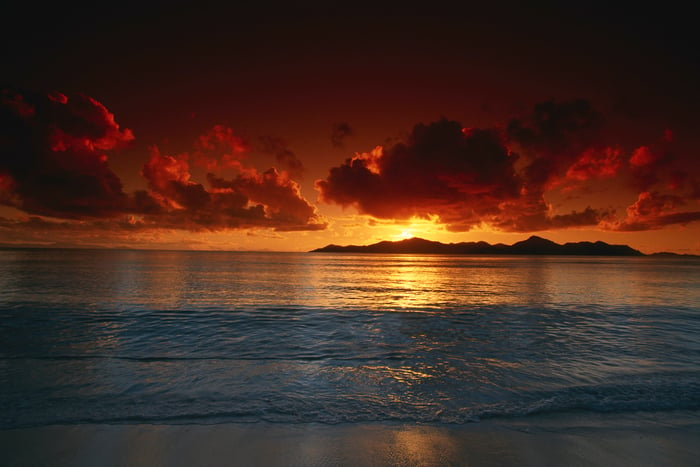 Delta Air Lines (NYSE:DAL) is giving more altitude to its quarterly dividend, pushing it 50% higher to just under $0.31 per share. The move comes not long after Delta posted its first quarterly year-over-year improvement in passenger revenue per available seat mile -- a crucial metric for airlines -- since the end of 2014.

That was the good news for the period; the bad was a 21% decline in net profit to $1.22 billion, which came in under analyst estimates. Much of this drop was due to large-scale cancellations in the wake of a storm, exacerbated by higher personnel and fuel costs.

Delta expects that cost efficiencies should help boost profitability, while fuel and other operating expenses stabilize. As for the dividend, I can't imagine it'll be under pressure, even at this new level -- which, when plugged into this past quarter's per-share net profit, makes for a very low and manageable payout ratio of 18%. 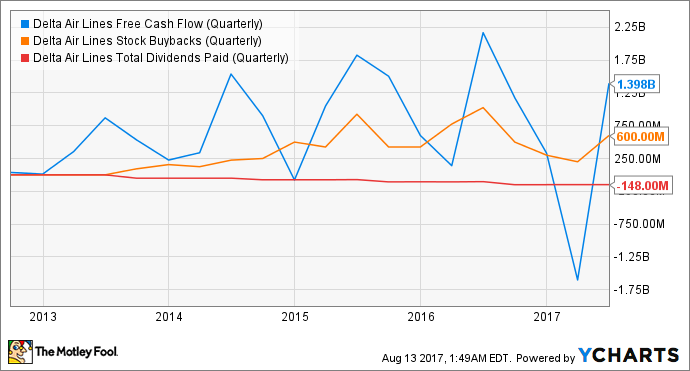 The company's recent free cash flow has generally been higher than what it pays out in dividends and share buybacks; lately it's heavily favored the latter. As such, it can pull back on buybacks and at least maintain the current payout if it so desires.

Delta's new dividend will be disbursed on Sept. 13 to stockholders of record as of Aug. 23. It would yield 2.5% at the most recent closing stock price, comfortably above the 1.9% average of dividend-paying stocks on the S&P 500.

Veteran home-furnishings retailer Havertys (NYSE:HVT) declared that its upcoming quarterly dividend will be $0.15 per share. That's a 25% improvement on its predecessor. The company didn't fail to mention that this will be the highest quarterly payout in its more than 80-year history of handing out dividends.

Havertys' enhanced distribution was announced just before the company's Q2 earnings release, which showed a significant increase in net profit -- despite comparable sales that were flat year-over-year and revenue that only ticked up marginally. The company attributed its 15% rise in profitability, reaching nearly $6.2 million, to increased sales of higher-margin products and improvements in quality control, among other factors.

Although its dividend stretches back decades, it has generally been fairly modest and easily covered by the bottom-line result; this past quarter was no different, with a payout ratio of 41%. Lately the company has spent all, or even more than, its free cash flow on regular and special dividends, plus stock buybacks. Yet it has a strong cash position, and it isn't burdened by an overly heavy amount of debt. 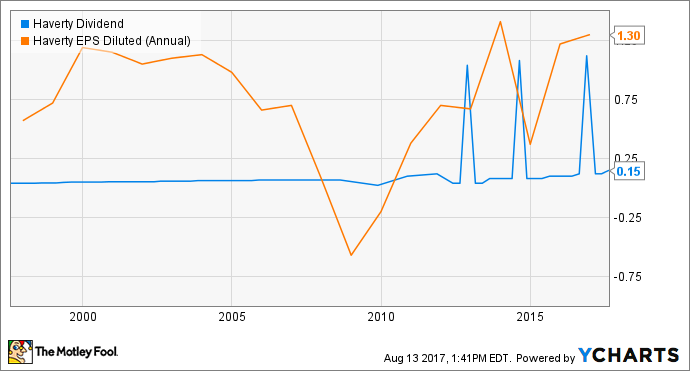 When all's said and done, then, I think the company should be able to maintain its tradition of rewarding its shareholders. We might not necessarily see 25% raises in the immediate future, but we can probably count on modest increases in the coming years.

Havertys' next dividend is to be paid on Sept. 8 to investors of record as of Aug. 23. It yields a theoretical 2.5%.

In advance of its Q2 results, financial-services company Primerica (NYSE:PRI) lifted its quarterly dividend by $0.01, or 5%, to $0.20 per share.

That seems a bit miserly, given how well the company did during the quarter. Fueled by a double-digit percentage rise in its take from term life insurance -- its key product -- total revenue rose by 9% on a year-over-year basis, to almost $414 million. That funneled down to a 6% improvement net income, which landed at just over $63 million.

Primerica aims to concentrate much of its effort on life insurance; this is sensible given the aging and very large Baby Boomer population in this country. The company said that this focus should help fuel growth in the remainder of this fiscal year.

Primerica's dividend is quite small compared with this recent profitability, with a Q2 payout ratio of only 15%. The company is an effective cash generator -- both operating and free cash flow have increased at a very healthy rates over the past few years. It's a very busy and active buyer of its own stock, and a less eager dividend raiser.

Regardless, both cost items are easily covered by free cash flow, so this payout looks very safe for now, although the company could be more generous with it. 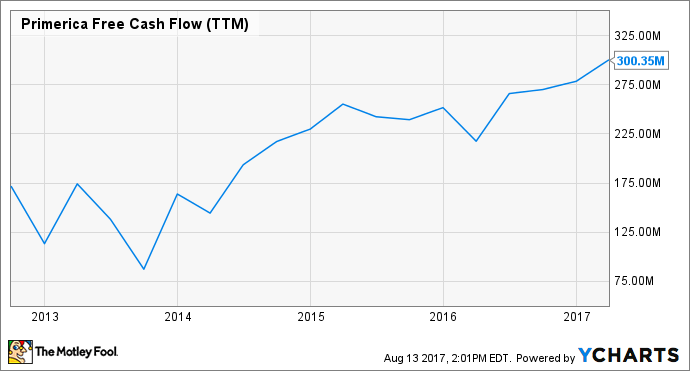 Primerica will pay its freshly raised dividend on Sept. 15 to shareholders of record as of Aug. 18. At the current stock price that new distribution would yield just under 1%.