The search giant pays the Mac maker billions per year to remain the default search engine in iOS Safari.

Services has emerged as a key business for Apple (AAPL -0.09%), one that is becoming increasingly important to the bottom line -- not only because it's one of the fastest-growing segments, but also because it's much more profitable. Services revenue jumped 22% last quarter, and is now the size of a Fortune 100 company. Digital content subscriptions, Apple Music, and iCloud storage are all contributing to that growth.

Google might pay an estimated $3 billion to Apple in 2017 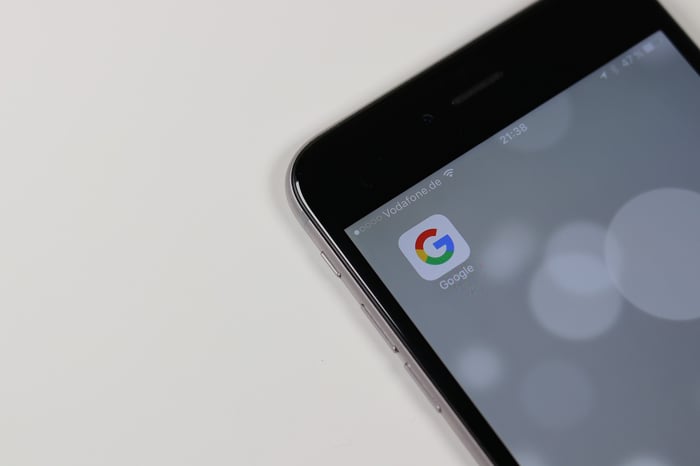 Google would love it if more people just used its app instead of the Safari search bar. Image source: Pixabay.

Bernstein has just put out a research note (via CNBC) estimating that Google will end up paying closer to $3 billion this year, and this money is included in Apple's services business. If that estimate is accurate, that could represent somewhere around 10% of services revenue. On a trailing-12-month basis through June, Apple has generated $27.8 billion in services revenue, but this segment should continue to post growth in the latter two quarters of 2017.

Those payments are "nearly all profit"

It gets better. While services are generally a high-margin business for Apple, the licensing fees that Google pays are "nearly all profit," according to Bernstein.

Other parts of the services business come with greater costs. Apple must invest in developing its first-party services like Apple Music (which also includes substantial licensing fees and royalties to record labels), and cover infrastructure costs associated with things like iCloud storage. Apple enjoys a cut of third-party subscriptions (30% for the first year, and 15% after that) and app sales (30%), but has to cover operating expenses associated with running its digital storefronts. That's no easy task, as there are now over 2.2 million apps in the App Store.

In contrast, selecting Google or any alternative search engine as the default is akin to flipping a switch with minimal costs, sending all that traffic to Google. iOS contributes roughly half of Google's mobile search revenue by Bernstein's estimates. That's why Bernstein thinks that those licensing fees could comprise a whopping 5% of Apple's total operating income in 2017. Furthermore, these payments could account for 25% of the Mac maker's operating income growth over the past two years.

Apple is definitely making progress in growing its services business, and still hopes to double the segment by 2020. Google's payments are helping, too.