It has been a long time since the words "growth" and "Cliffs Natural Resources" (NYSE:CLF) could be used in the same sentence. (Nor will they likely be again: Today, the company announced it has renamed itself Cleveland-Cliffs, effective immediately.) Even if there were opportunities, the company simply didn't have the ability to pursue them because of its bloated balance sheet.

Today, though, Cleveland-Cliffs is in a different place, and management wants to chart a course toward new opportunities. Here are several quotes from Cleveland-Cliffs' most recent earnings call that should help investors better understand the situation on the ground and what the company will look like several years from now. 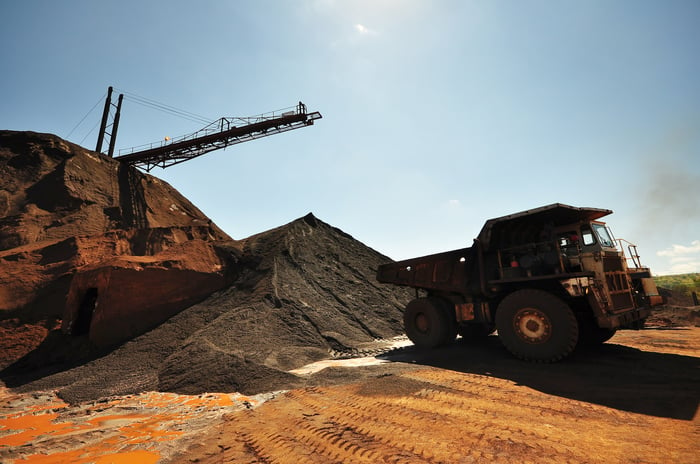 Ever since CEO Lourenco Goncalves took the reins, the business has consistently been in "fix the balance sheet" mode. The company had previously taken on way too much debt for questionable expansion plans, which left it far too overleveraged for a cyclical business. Goncalves and his team have been repairing the damage ever since and have reduced the company's overall debt load by 50%.

With a much better balance sheet, Cleveland-Cliffs' management is shifting back toward capital expenditures. The company started with a $75 million iron ore pellet facility, but the big prize is its new Toledo, Ohio, Hot Briquetted Iron (HBI) facility. According to CFO Tim Flanagan, Cleveland-Cliffs will ramp up spending a lot in the next two years:

Now for capex, we spent $22 million in the quarter as we began commercial production of our new superflux pellet Mustang. I'm pleased to report that this project was completed on time and on budget. We now have our sights set on the $700 million HBI project. While early stage engineering, procurement and construction spend related to the Toledo plant will go on over the next 12 months, the major spend will take place between the summer of 2018 and the summer of 2020, concluding in that point with the commercial production of HBI.

Based on the company's current financial position and cash flow abilities, this doesn't look like a bank-breaking investment. Management mentioned several times on the call that it might bring in a partner if it wants, but doesn't feel obligated to do so. 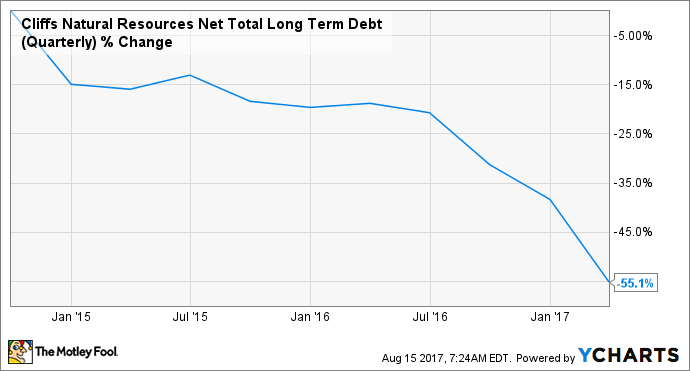 The revision in guidance isn't necessarily a bad thing

When Cleveland-Cliffs reported earnings, it said it was also lowering 2017 EBITDA guidance. That news sent shares tumbling the day of the release.

Applying the year-to-date average [Platts Iron Ore Index] price of $70 per metric ton and the hot-rolled coil price of $620 per short ton for the remainder of the year, we would expect a 2017 adjusted EBITDA of approximately $650 million. Along with these downward revisions to pricing, this guidance also reflects other revised assumptions impacting EBITDA, including those for pellet premiums, cash costs, realization rates in [Asia Pacific Iron Ore] and [selling, general, and administrative expenses].

Cleveland-Cliffs' guidance is heavily influenced by the price of iron ore, and management has basically admitted it can't predict what those prices will be. So instead of trying to guess, the company simply says if iron ore prices hold at their current levels, it will make a given amount in 2017. Of course, if prices go up in the third or fourth quarter, we could see an upward revision. So from here on out, if you hear the words "lowered guidance" associated with any Cleveland-Cliffs-related news, just know that is likely the reason and not something to fret about.

Ever since Goncalves took over at Cleveland-Cliffs, he has consistently been a cheerleader for the company and American iron ore mining in general. In his prepared remarks, he wanted to remind investors what makes it a uniquely positioned company. The first advantage, he explained, was a geographic benefit that kept many other steel mill suppliers out of the market in which Cleveland-Cliffs operates:

Goncalves listed other advantages that Cleveland-Cliffs has, such as a more technically consistent product that makes running mills easier and the high barriers to entry for iron ore mining in America.

Transitioning to the future of steelmaking

The Toledo HBI plant will manufacture a product that is designed to use in electric arc furnaces (EAF) instead of the traditional blast furnace. These new types of furnaces require a much higher quality input product, which is why Cleveland-Cliffs is making this investment. Electric arc furnaces are the future of steelmaking, as they can use scrap metal as well as reduced or hot briquetted iron and can be economic on a much lower scale.

Cleveland-Cliffs has only supplied blast furnaces for years, but this new plant will change that. According to Goncalves, there is an immense opportunity for this product in the Great Lakes region and this facility is a slam dunk:

Right now, there a over 3 million metric tons of alternative iron units imported into the Great Lakes every year, mostly, in the form of pig iron from countries like Brazil, Russia and Ukraine, or as HBI mainly from Venezuela. Not only is this feedstock costly to import from unreliable sources, but it comes in varying qualities that the American buyer currently have no choice but to accept.

The EAFs in the Great Lakes region have long been craving a local supply of these iron units, and likely would consume even more than the current 3 million metric tons per year if they could get their hands on it. Cliffs was not a producer of DR-grade pellets before, but now we are. And we also have access to affordable natural gas in the United States, particularly, in the Great Lakes. HBI has always been part of my roadmap to take Cliffs into the future, but we just did not have the balance sheet to make this type of investment. Now we do.

One analyst did note that some other steelmaking companies in the U.S. were making reduced iron themselves to supply its facilities. Goncalves explained why this isn't a huge concern:

Customers with the DRI project these days are only one, Nucor. Nucor has a [direct reduced iron] facility in Trinidad, and another DRI facility in Louisiana. They are both on the coast, so they are positioned to receive seaborne pellets. And they are both in locales that they are very good to serve the mini-mills that they own. They are located in the south of United States. They do not produce anything in the Great Lakes. So am I expecting Nucor to be a client? Absolutely. Because they have several other mini mills, up North there, that are out of reach from their own locations in the South.

Hearing Goncalves cheer the benefits of the American iron ore business and how iron ore in the Asia-Pacific isn't attractive always seems a bit awkward when Cleveland-Cliffs has mining operations in Australia. It's like a parent praising one child while the other one sits in the corner.

There has always been a question as to what Cleveland-Cliffs would do with its Australian mining operations since they didn't seem to fit with what the company wanted to do long term. It looks like, based on Goncalves' statements, the company is going to run the current facility until it can't run anymore:

The advantage that we have in the U.S. do not apply to our presence in Australia. However, given its low capex burden, APIO is still is, for now, a cash flow-generating asset for us. We will continue to operate this asset for cash. But at this time, we have no real plans to expand the life of mine beyond the current proven and probable iron ore reserves. The way we plan it and are executing our strategy, HBI coming online in 2020 will more than offset the EBITDA and cash flow coming from Australia, which, at that time, would theoretically be arriving at its end of life. Based on our realistic view of the international market, while we cannot count on APIO to be an ATM for Cliffs every single quarter, we definitely expect our Australian business to continue to be a positive cash flow generator for us, until the time comes, and we finally let APIO rest in peace.

Cleveland-Cliffs is clearly in a new phase of its life cycle (and a new name only helps that impression). After three years of slimming down its portfolio of assets and cleaning up its balance sheet, management now has the assets and financial standing to start growing again. As Goncalves mentioned, the sunsetting of the Asia Pacific iron ore business will coincide with the new Toledo facility coming online in 2020, so we shouldn't expect too much growth between now and then. After that, though, Cleveland-Cliffs will be well positioned to generate decent returns with a clear focus on the American market.