It's naturally difficult to drum up words of encouragement for Blue Apron (NYSE:APRN) investors these days. The leading meal-kit provider has seen its value cut nearly in half since going public at $10 less than two months ago.

Blue Apron has had a cruel summer. Amazon.com has emerged as a rival, and we know the leading online retailer isn't afraid to forsake near-term profits for a shot at grabbing market share in a hurry. Then we got to last week's horrendous financial results. The now-broken IPO has dug itself into a pretty big hole. Let's go over its biggest challenges in wooing back investor interest. 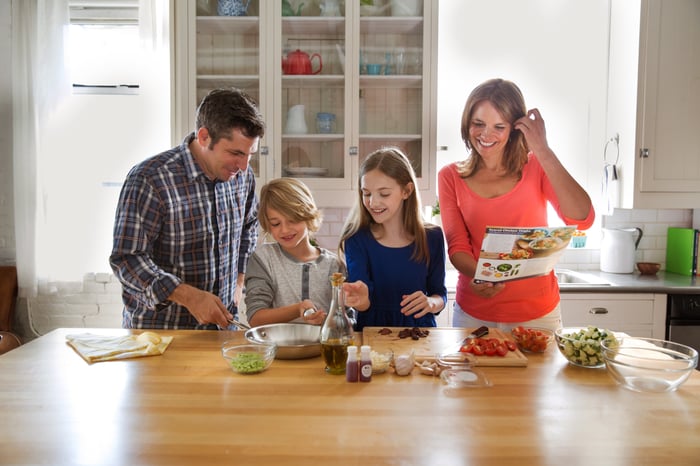 1. Raising money will be a problem

A big reason why private companies go public is for the easier access to capital. In an ideal world, a company goes public by offering just enough new shares for demand to outstrip supply, going for a secondary offering to raise more money after the IPO has appreciated nicely. Obviously this isn't out how the Blue Apron deal played out.

Blue Apron won't be able to sucker in a new wave of investors. What underwriter would take on the tall task of getting folks to buy into a company whose first public offering went from $10 to less than $6 in just seven weeks of trading? There won't be a secondary offering anytime soon for Blue Apron, and if there is, you can be sure it will be on desperate and highly dilutive terms.

Raising money might not be a big deal to many public companies, but Blue Apron is still in the red. It's going to continue to bleed money in the near term, and it's going to need more if it wants to compete with Amazon.

The worst part of Blue Apron's report wasn't its decelerating revenue growth, though seeing revenue more than double through all of 2016 only to climb 42% during the first quarter and slow to 18% in its latest quarter isn't a good look. The big shocker was that the $380 million to $400 million it's now targeting for the final half of the 2017 is less than the $421.4 million it rang up during the latter half of 2016.

An IPO was supposed to create more visibility for the brand, but now we're seeing that foodies are leaving more quickly than new ones coming in to kick the tires. The niche is growing even more competitive, so there will always be the fear that we hit peak Blue Apron earlier this year until financial results prove otherwise.

3. The model could be broken

The average customer is placing a little more than four weekly orders a quarter. There are roughly 13 weeks in a quarter so it's clear that churn is a problem. Consumers are drawn to the novelty of Blue Apron and perhaps even the value proposition of $10-a-head meals relative to pricier fine dining options, but they're just not sticking around.

Blue Apron may need to come up with a second act. Desperation and disruption breed an opportunity (if not a requirement) for reinvention. We'll find out soon if Blue Apron has what it takes to raise the bar again.