Stocks rose on Wednesday despite turmoil in Washington, with the Dow Jones Industrial Average (DJINDICES:^DJI) and the S&P 500 (SNPINDEX:^GSPC) posting small gains. 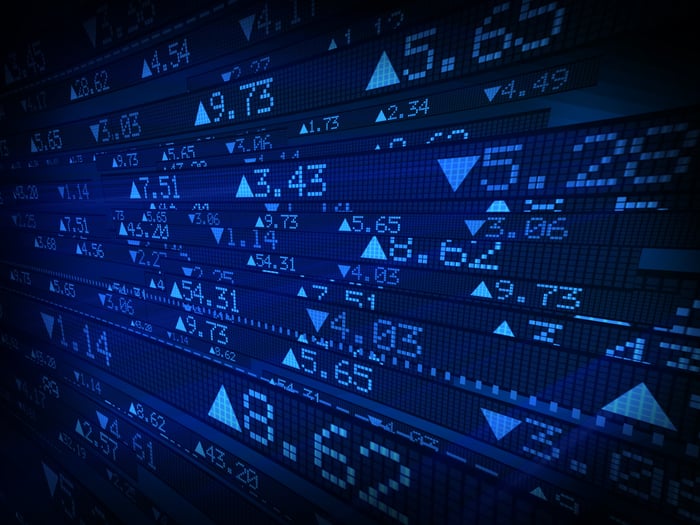 Urban Outfitters announced second-quarter results that management called "disappointing" but the market considered far better than they could have been, and the stock soared 17.5%. Revenue fell 2% to $873 million on a decline in comparable sales of 4.9%, while earnings per share plunged 33% to $0.44. If that all sounds unimpressive, it was still good news to a market that was expecting EPS of $0.37 on revenue of $861 million.

Comparable sales dropped 7.9% at the company's flagship Urban Outfitters brand stores and fell 4% at Anthropologie Group, but Free People comps rose 2.9%. There were some other bright spots besides the success at Free People, too: Wholesale sales increased 10%, the direct-to-consumer channel had positive comps, and management highlighted good growth in Europe and positive comps for men's wear in Urban Outfitters stores.

Company management expressed displeasure in the results but tried to stir optimism for the future. "While we are disappointed in our second quarter performance, we have a number of initiatives underway including: speed to customer, international growth, wholesale expansion and digital investments," said CEO Richard A. Hayne in the press release. "We believe these initiatives combined with encouraging fashion apparel trends could lead to improved topline performance in future quarters."

With growth struggles clearly continuing in Urban Oufitter's largest chains and the outlook still a bit murky, today's leap in the stock price could seem unjustified. But with expectations so low, shares that are down 30.6% this year, and heavy short interest, even a whiff of less-bad news was enough to boost the stock.

Target turns in some solid results

Shares of Target advanced 3.7% today after the company bucked the trend of second-quarter sales declines in department stores by announcing better-than-expected earnings on improved store traffic and strong growth in digital sales.

Comparable sales increased 1.3% in the quarter, with a 2.1% increase in transactions more than offsetting a 0.7% decline in prices. Sales through the company's digital channel increased 32% year over year and added 1.1 percentage points to comps, while the remaining 0.2-percentage-point gain attributable to brick-and-mortar stores stood in contrast to the declines reported in recent days by Target's peers. The result was earnings per share that grew 14.2% to $1.22 when analysts were expecting $1.19.

Target has been trying to revive its image with consumers by releasing new brands, remodeling stores, and revamping pricing to provide more attractive everyday prices without relying on promotions. Results this quarter -- which had been previewed last month and caused the stock to pop almost 5% -- seem to indicate that the strategy is working and pulling customers into stores, something tough to do in today's environment. With online sales growing fast and the company planning on building new, small-format stores, investors seem encouraged that Target could be on the upswing.