Devon Energy (NYSE:DVN) recently reported solid second-quarter results after delivering production toward the top end of its guidance range, enabling it to beat expectations. Those results continued the company's recent string of successes as it emerges from the oil market downturn.

That said, one thing that was evident from the comments of CEO David Hager on the accompanying conference call is that the company is still a work in progress. Overall, he detailed five points that show the steps it's taking to become a stronger company for the long term. 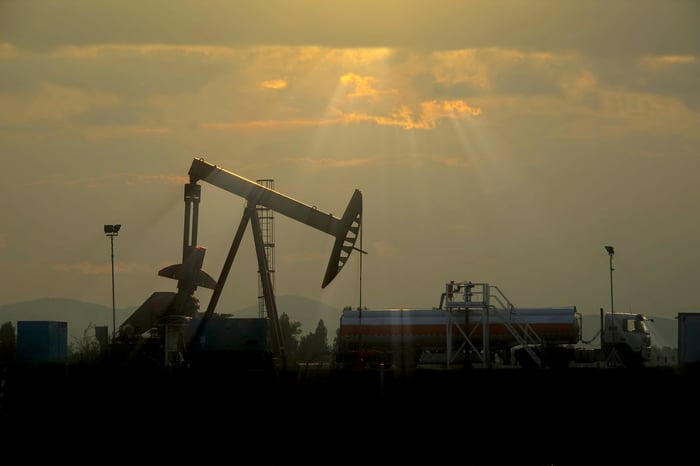 No. 1: We're displaying capital efficiency at its finest

Hager led off his prepared remarks by saying that:

Devon achieved another high-quality operating performance in the second quarter, building operational momentum in our U.S. resource plays and accelerating efficiency gains across our portfolio. These successful efforts resulted in record-setting well results that drove our U.S. oil production above guidance expectations, with a capital investment that was 17% below our budget year to date. As a result of this strong capital efficiency, we are lowering our full-year capital outlook by $100 million and importantly, we have not made any changes to our planned activity levels in 2017.

As Hager points out, Devon is doing a better job getting more production out of its latest wells through innovation and efficiency gains. That was on full display last quarter when it drilled a monster well in the STACK play of Oklahoma that "achieved the highest initial production rate of any well [in the play] by a wide margin." Because of gushers like that one, and its ability to get more out of its capital dollars through cost saving initiatives across its supply chain, the company was able to trim its budget while at the same time boosting its production growth forecast.

Capital efficiency has been an industrywide trend this year. Marathon Oil (NYSE:MRO) is one of several shale rivals that not only raised its production guidance this quarter but also cut its full-year budget. In Marathon's case, it's reducing its budget 10% while increasing the exit growth rate out of its U.S. resource plays from 20%-25% up to 23%-27%.

No. 2: We're ramping up where it matters most

Even with Devon's spending cut, Hager noted that: "For 2017, our capital plan remains on track to reach 20 rigs running by year-end, and we expect to maintain this operational momentum in 2018. Importantly, nearly all of this planned drilling activity is concentrated within our STACK and Delaware Basin assets, which are two of the very best positioned plays on the North American cost curve, delivering attractive returns even at today's strip prices."

In other words, the company has no intention to slow its plan to boost its rig count up to 20 by year-end. That's in direct contrast to what Sanchez Energy (NYSE: SN) and Whiting Petroleum (NYSE:WLL) recently announced. In Sanchez Energy's case, the Eagle Ford Shale-focused driller plans to reduce its rig count from eight to five by the end of September. Meanwhile, the Bakken Shale-focused Whiting Petroleum plans to drop two rigs and only run four the rest of the year. That said, the reason Devon isn't backing down on its plan is that not only does it have the money to keep drilling, but the two regions where it's adding rigs are producing exceptional returns at current oil prices.

No. 3: We're not growing for the sake of growth

That led Hager to the next point, where he stated: "To be clear, we are not chasing production growth with our capital programs and remain keenly focused on maximizing our full-cycle returns. With this disciplined approach to the business, I can confidently say that this drill-bit activity is a very appropriate level of investment for Devon in this environment."

In other words, the company is pouring capital into these two plays because the returns are too good to pass up. For example, Marathon Oil noted that it's earning 90%+ returns in both the Northern Delaware and from some of its STACK wells at $55 oil. 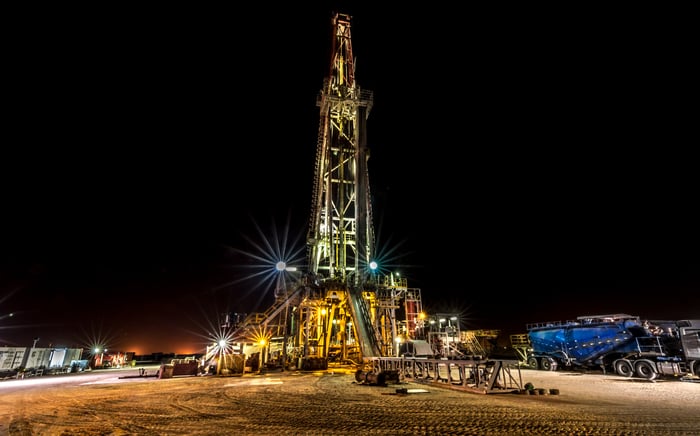 No. 4: There's potential for further improvement in returns

While Devon and its peers are already earning lucrative drilling returns in the STACK and Delaware Basin, they're still just scratching the surface. Hager points out that, "As these assets shift to full-field development, we fully expect to enhance returns as we reap significant efficiency gains from our multi-zone manufacturing work and further optimize our best-in-class operational performance with cutting-edge predictive analytics and artificial-intelligence efforts."

Devon has steadily improved its performance as it gains a greater understanding of these plays, which is a trend it doesn't expect will cease anytime soon. In fact, it plans to get its lease operating expenses down to $4 per barrel of oil equivalent by year-end, which would be an improvement from $4.30 last year and $5.30 in 2015. Future improvements should boost the already lucrative returns the company earns from drilling wells in these two plays.

No. 5: We're still transforming the company

These efforts are all part of the steady transformation Devon has undertaken to become a top-tier oil company. That said, it's still in the middle of an "exciting multi-year transformation" according to Hager. Future initiatives include selling additional non-core assets as part of its intention to "have a fortress balance sheet with net debt-to-EBITDA target of 1.0 to 1.5x by the end of the decade." That financial strength, when combined with its returns-driven growth, "will allow Devon to deliver consistent, competitive, and measured growth rates along with top-tier returns on capital employed."

Improving results should lead to better days ahead

Devon Energy continues to do a better job getting more oil out of each new well for less money, which is boosting per-well returns. That's allowing the company to slowly transform into a returns-driven oil company, which it believes can create lasting value for investors. While it's not quite where it wants to be, it's clearly heading in the right direction, which should eventually take its stock along for the ride.