Over the past few years, a number of fast-food chains have been trying to outdo each other when it comes to menu innovation. You can largely thank Yum! Brands' (NYSE:YUM) Taco Bell for creating the trend of food mashups with hit potential with its Doritos Locos Tacos. That snack chip/taco combo sold half a billion units in its first 14 months on the market beginning in 2012, and it has been a steady seller since then. The Doritos Locos Taco has also had a number of spinoff products, including a spicy version, and it has led other chains, including Restaurant Brands International's (NYSE: QSR) Burger King, to introduce their own snack chip-infused products.

Since 2012, we've seen sandwiches with fried chicken buns, shakes mixed with breakfast cereals, pizzas with hot dogs embedded in the crust, and a whole lot of other wacky ideas. Recently, however, a number of chains including Taco Bell, Chick-fil-A, Dunkin' Brands' (NASDAQ:DNKN) Dunkin' Donuts, and Jack in the Box (NASDAQ:JACK) have turned their innovation attention toward breakfast. 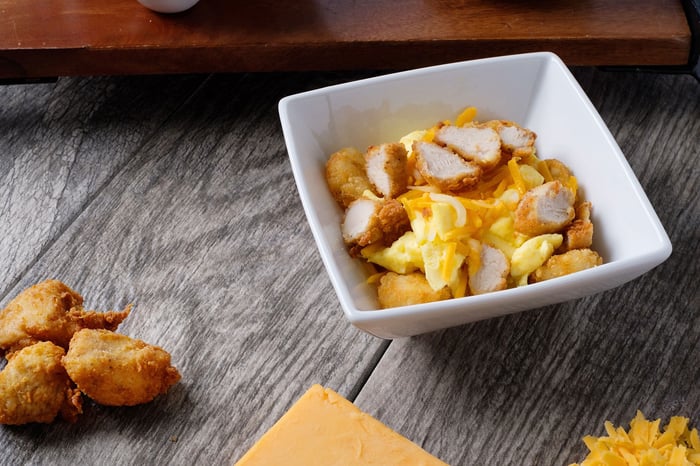 What new breakfast items are coming?

Breakfast is big business and many restaurants are stepping up their morning game. And while an Eater post from earlier this year noted "the seeming pervasiveness of avocado toast and bottomless mimosa brunch," there's another angle to attracting diners. Products like the Doritos Locos Taco and Burger King's Mac n' Cheetos have shown that being outrageous gets attention.

Not every new breakfast item being introduced now or in the coming weeks is truly over-the-top, but ... well, you be the judge.

Why try so hard?

Taco Bell has shown that outrageous gets attention and sometimes people will like the product enough to make it a hit. All of these chains are trying to stand out from a field crowded with breakfast options and offering something unexpected can help do that.

Whether it's using a fried egg as a shell or putting chicken nuggets in a breakfast dish, each of these items is an effort to create something compelling enough for consumers (and media) to notice, but not so weird people won't try it. That's sometimes a narrow tightrope, but if a company can walk it, increased market share can be the reward.