Enterprise storage specialist NetApp (NASDAQ:NTAP) reported earnings after the closing bell on Wednesday, beating Wall Street's earnings targets and drawing up a clear picture of solid growth prospects after a couple of lean years. Share prices still fell more than 6% on the news, but that's more profit-taking than a thumbs-down vote on NetApp's results. 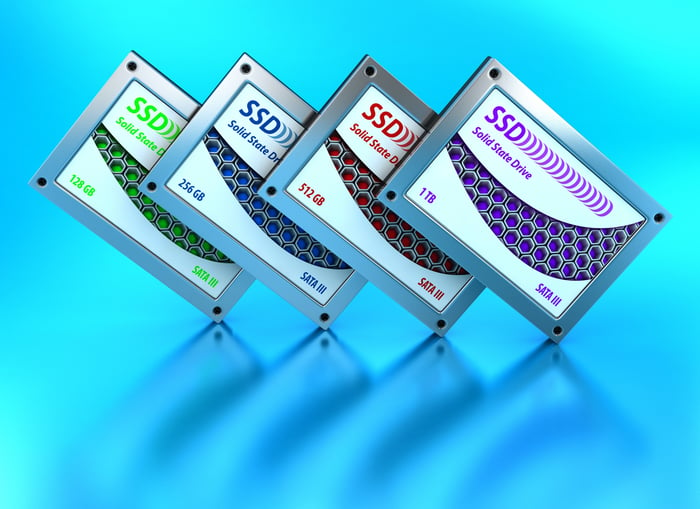 Analysts would have settled for adjusted earnings of $0.55 per share on sales of $1.32 billion, so this was a solid bottom-line surprise. The earnings figure was also above the high end of management's guidance range for the first quarter.

NetApp's gross and operating margins ended up richer than expected, as the quarter's product mix trended toward the more profitable end of the spectrum. Sales increased 22% year over year for what NetApp refers to as strategic products. This category was led by storage arrays featuring 100% flash memory instead of traditional magnetic disks or hybrid solutions mixing the two storage types.

All-flash systems sales doubled compared to the year-ago period, and the product category now stands at a $1.5 billion annualized revenue run rate. These are new products in NetApp's portfolio, leaving plenty of room for further growth.

"We are in the very early innings of our install base. It's less than 10%," said CEO George Kurian in a conference call with analysts, referring to his company's flash-based storage products.

Flash systems should start moving the needle on service sales as well, but not right away. Later in the same earnings call, NetApp CFO Ronald J. Pasek explained how the process works:

"When you sell a new system, be it flash or anything else, you sell a three-year service contract. You recognize the revenue ratably every month over the life of that contract," he said. "Our attach rate on new systems is actually quite good, but it doesn't move the services number to any great extent because it's a huge number to move. So most of the variance you're seeing is, as I said, pricing changes we made several years ago and then renewals on other things coming up for renewal that are older systems."

This was a solid effort and NetApp's growth plans look strong. That combo was a relief because the past five years have been looking like this: 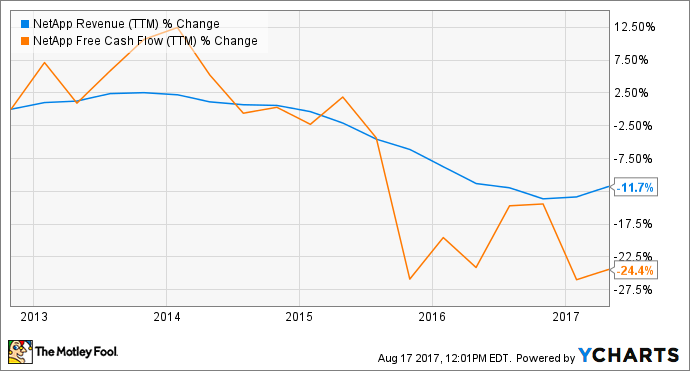 Share prices have followed the general business trends, including a hefty bounce in the last few quarters. NetApp's stock has soared 86% higher since bottoming out in early 2016, which explains why even a downright decent report led to a significant sell-off.

NetApp shares are trading for less than 13 times forward earnings and 19 times trailing cash flows. And don't forget that the company boosted its dividend payouts by 5% over the summer, so the effective dividend yield on NetApp shares is peeking above the 2% mark today.

All told, this sudden price drop, which wasn't paired with any fundamental support for a lower valuation, looks like a reasonable buy-in window for opportunistic NetApp investors.