Big wireless, or more clearly biggest wireless, has a problem.

AT&T (NYSE:T) and Verizon (NYSE:VZ) used to market their more-expensive services on the fact that they offered better networks. That's no longer clearly the case. Of the two widely accepted industry studies on the subject, one from RootMetrics shows the gap narrowing between the four major carriers. The second study, from OpenSignal, puts T-Mobile (NASDAQ:TMUS) in the lead.

In reality "best network" can mean different things to different people. It depends a lot on where you live, where you travel, and how you use your phone. The one truth, and it's something Sprint (NYSE:S) has been pushing in its ads, is that all networks are now pretty much the same. 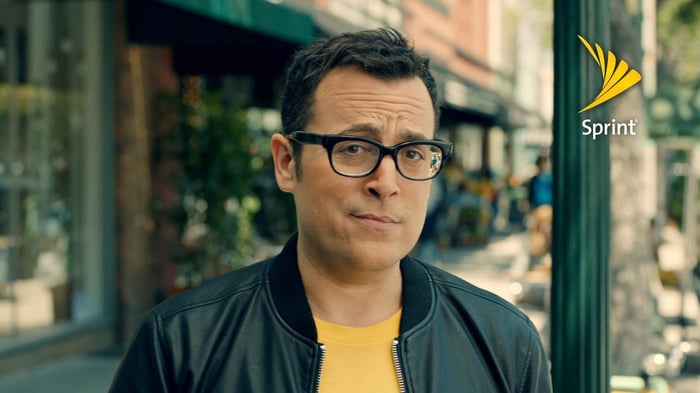 Sprint has been using Verizon's former pitchman Paul Marcarelli to tout that all networks are pretty much the same. Image source: Sprint.

A blow to Verizon and AT&T

People will pay more for better service. History has shown that customers will actually pay more for even the perception of better service. AT&T and Verizon used to actually have superior networks to T-Mobile and Sprint, but now they mostly only have the perception of being better. That's an image that has been fading as both low-cost carriers have been heavily marketing the idea that network quality is no longer a differentiating factor.

As this idea becomes more accepted, one of two things, or perhaps both, will happen to AT&T and Verizon. They will either lose customers, lower prices, or suffer some combination of the two. It's nearly impossible to believe that consumers will pay higher prices for roughly the same thing once they understand that's what they are doing.

As you can see in the chart above, Sprint has the best deal (though it's a promotion that could end) while Verizon charges the most. T-Mobile's prices are actually lower than they appear because the company includes taxes and fees in its base price.

Verizon and AT&T were forced by T-Mobile and Sprint into offering unlimited data plans costing them billions in overage charges. That pressure is going to increase as T-Mobile continues building a reputation as having the best combination of network and price while Sprint uses extreme discounting to win customers.

T-Mobile has 17 straight quarters where it has added more than 1 million customers. Sprint has turned a corner and reported positive income for the first time in three years in Q1 and it has the stock price upside that the company is very much available for sale or merger. That could mean a merger with T-Mobile, or another buyer, but either scenario likely means bad news for AT&T and Verizon.

Sprint and T-Mobile have the most upside in the wireless industry because they have built their business on what matters to consumers now. AT&T and Verizon built theirs on a network quality advantage that has either eroded greatly or no longer exists. That's going to lead to more pain for both companies as they adjust to a changed market, and T-Mobile and Sprint should profit from that pain.