Iconix Brand Group (NASDAQ:ICON) recently released disappointing numbers for the second quarter of 2017. Shares fell as a result, and investors are left waiting once again for signs that the business has stabilized. 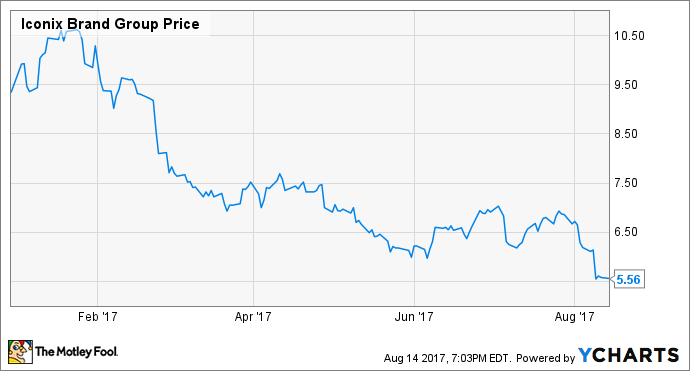 The quarter by the numbers

Revenue was down 7% year over year, which excludes the divestiture of Sharper Image and the entertainment division that consisted of the Peanuts and Strawberry Shortcake cartoons. That's an improvement from the 11% year-over-year drop in the first quarter, but top-line growth has been elusive for several years now.

As for the bottom line, net income was a loss of $16.3 million compared to income of $10.6 million during the same period in 2016. Management said the loss was due to fees associated with a licensee termination and the early payoff of debt. Excluding those extraneous items, net income was positive at $15.2 million.

Shoring up what was a troubled balance sheet has been priority No. 1 for the management team. After this last quarter -- in which Peanuts and Strawberry Shortcake were sold and the company acquired a term loan to pay off the 2018 convertible notes -- CEO John Haugh said that the company's near-term objectives regarding the balance sheet are complete.

As a result of that debt reduction, interest expense dropped 35% from last year and stand to continue falling. All of the current results were positive for Iconix, but it was future expectations that were the real story behind the stock's fall.

For Iconix to be called a rebound success story, revenue growth will need to happen. That has yet to materialize, and Haugh downgraded full-year 2017 revenue guidance to $225 million to $235 million compared with previous guidance of $235 million to $245 million. Quarterly segment sales in men's and women's apparel showed continued weakness and is causing the downbeat outlook for the rest of the year.

Haugh said declines in sales can be primarily attributed to three brands: Danskin, Starter, and Ocean Pacific. The women's apparel segment suffered as women's active apparel brand Danskin was hurt by new contract terms and falling sales at Wal-Mart Stores. Ocean Pacific is ending its relationship with Wal-Mart altogether, another headwind, but has reportedly found success at Urban Outfitters and is also being placed with a yet-to-be-announced department store.

Starter is also becoming a non-exclusive brand at Wal-Mart after contributing over half of the quarterly decline in the men's segment. A new product line and new home for the brand will be announced in the coming weeks.

The Mossimo brand, which has been a Target exclusive for years, has been one of the strongest performers in Iconix's portfolio. Haugh said that after extensive study, it has been decided to expand the line beyond Target into department stores and online, though Target will remain a key partner, especially in the home segment of the business.

This was a mixed quarter for Iconix, and investors are getting frustrated with the lack of revenue growth from the large stable of brands under the company's control.

However, with the debt situation taken care of for now, generating organic growth is now the chief concern for Haugh and company. Iconix's biggest brands are being repositioned with what appears to be a focus on wider distribution and stronger online presence. That could create the opportunity for more hiccups in the quarters ahead, but it sounds like a positive thing. Stay tuned in the weeks ahead as the company releases more details on its plans.