Please ensure Javascript is enabled for purposes of website accessibility
Log In Help Join The Motley Fool
Free Article Join Over 1 Million Premium Members And Get More In-Depth Stock Guidance and Research
By Nicholas Rossolillo - Dec 5, 2017 at 8:06AM

News on the beleaguered brand management company has been very bad for years, but shares could be too cheap to ignore.

Iconix Brand Group (ICON) can't catch a break. Shares of the brand management company are down 80% year-to-date, and another round of bad news has emerged, derailing hopes of a rebound anytime soon. While there is little to be excited about at the moment, the stock might just be cheap enough to warrant another look. 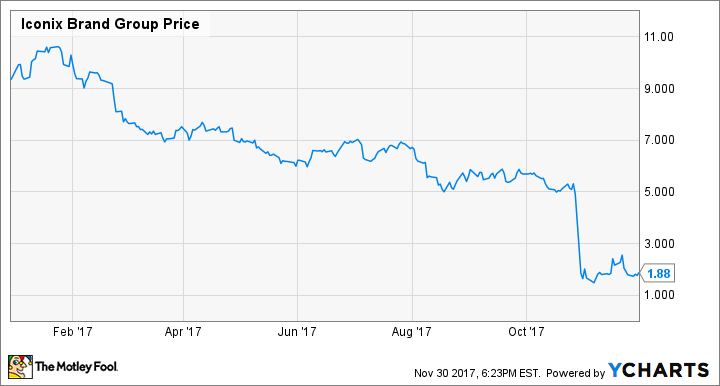 Iconix has been working on a rebound the last couple of years. While some headway has been made in the reduction of debt -- primarily through the sale of the Sharper Image and the Peanuts brands -- the overall the business has struggled to find any real growth. 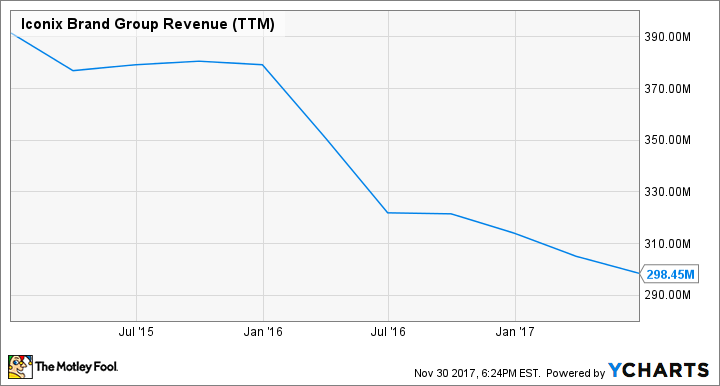 In the latest blow to investors, Iconix announced that Wal-Mart Stores (WMT 0.71%) would be dropping Iconix's DanskinNow, a women's athletic apparel brand, beginning in January 2019. Management said to expect a $15.5 million decline in revenue in 2018 as a result of lost royalty income. Danskin will continue to be distributed to other retailers, though, including Costco (COST 0.90%) and TJX Companies' (TJX 0.68%) TJMaxx stores.

Management said it thinks parting ways with Wal-Mart could help Danskin expand into other stores, but investors had other worries in the near term. As a result of the expected revenue loss, the company had to reduce the size of its credit facility by $75 million, to $225 million. Iconix had already used $59 million of it to repay a portion of its debt coming due in March 2018, and the remaining $166 million will be utilized to refinance the remaining notes in March.

However, the loan is conditional on Iconix raising an additional $100 million in funds -- likely by selling off more brands from its portfolio. Shares resumed their steep decline due to the uncertainty of that happening in the next few months.

It's understandable that Iconix's stock took a hit over the Wal-Mart and credit news, but the near-term uncertainty could be creating a buying opportunity.

As of this writing, Iconix's market capitalization -- the value of a company found by multiplying the number of shares by the price per share -- has sunk to a mere $100 million. Enterprise value, though, which adds in debt and subtracts out cash and investments, values the company at $1 billion. The discrepancy between the two figures demonstrates just how sour investors have gotten on Iconix. What's more, enterprise value to EBITDA (earnings before interest, tax, depreciation, and amortization) is only 6.1.

These low valuations aren't taking into account the depth of the Iconix portfolio of brands. The company currently owns 28, including names like the aforementioned Danskin, Starter, Candie's, Bongo, Joe Boxer, Mossimo, and London Fog. Part of the reason Iconix is in a pinch is because of the transforming retail industry. Many of these brands rely primarily on big-box and department stores, a segment that has had its share of struggles the last couple of years.

However, many of these brands are still valuable, and headway is being made to transition sales to a modern format. For example, it was recently announced that a new exclusive line of athletic wear from Starter would be sold on Amazon (AMZN 0.73%). Despite the ongoing overhaul of Iconix' portfolio, there should be ample room to divest a couple of names to make up for the revenue shortfall after Danskin gets axed by Wal Mart.

Selling off a few brands was always part of the plan, anyway. Earlier this year, Charlie Brown and the Peanuts were sold for $345 million and the Sharper Image was sold for $100 million. Selling a couple more should easily solve the near-term debt issue and clear the way for management to refocus on growth.

With 28 brands still in the stable, the mere $100 million market cap value placed on the entire company that is Iconix seems too cheap. This stock has been a gut-wrenching roller coaster for the last few years, and that will no doubt continue, but there is a path toward rebound. However, buyer beware: cheap or not, Iconix stock is not for the faint of heart.