Please ensure Javascript is enabled for purposes of website accessibility
Log In Help Join The Motley Fool
Free Article Join Over 1 Million Premium Members And Get More In-Depth Stock Guidance and Research
By Jeremy Bowman - Aug 18, 2017 at 6:02AM

There are a number of headwinds facing the stock that will make its continued growth difficult.

The Coca-Cola Co. (KO 0.13%) was one of the best-performing stocks of the 20th century. Led by its namesake soft drink, the beverage company stretched its distribution network around the world, making its products ubiquitous and building what was once the most valuable brand in the world.

However, times have since changed. In the U.S. and elsewhere around the world, there's been a backlash against sugary drinks like soda, and beverages like bottled water, National Beverage's La Croix, coconut water and others have eroded soda's traditional supremacy.

Coca-Cola shares have risen 10% this year, in line with the S&P 500, but there a number of reasons to question the company's ability to continue delivering that growth. Here's why Coca-Cola shareholders may have something to worry about. 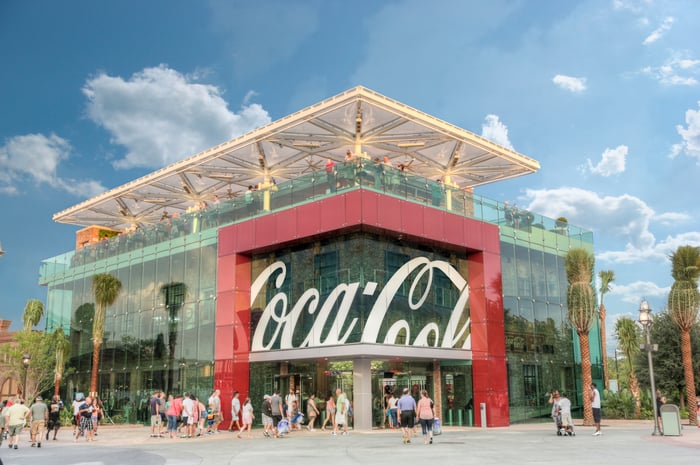 Soda consumption in the U.S. has slipped every year for more than a decade. It's not just sugary drinks that have taken a hit. Diet soda sales have fallen faster as Americans have increasingly looked to organic, natural, and healthier foods and drinks for their diets.

Municipalities in the U.S. such as Berkeley, California; Philadelphia; and others have begun implementing soda taxes that have led to significant declines in sales of the beverage. Outside of the U.S., countries like Mexico, the U.K., and France have also passed soda taxes with similar effects. France has even gone a step further by banning free soda refills in restaurants.

As obesity continues to become a health epidemic around the world, the backlash against soda, which is considered empty calories, is only likely to spread. In its most recent quarter, Coke's volume sales around the world was flat, and sales of sodas have generally lagged still beverages like sports drinks, juice, and water.

Coca-Cola shares have climbed this year, but that owes much more to multiple expansion than earnings growth. The stock now trades at a P/E of 24.4, but adjusted earnings per share is expected to be flat to down 2% this year. For a while, investors could count on aggressive share buybacks to prop up earnings-per-share growth, but Coke has cut back on that program as it restructures by refranchising bottlers and cutting 1,200 jobs.

Coca-Cola's valuation is similar to peers like PepsiCo (PEP 0.37%) at 24.9 and Dr Pepper Snapple (DPS) at 20. However, those companies have delivered earnings growth for investors, meaning they offer better value. Coca-Cola shares can only continue to gain so much more without the bottom line expanding as well.

3. Acquisitions are getting expensive

As consumers have turned away from Coca-Cola traditional beverages, the company has made acquisitions to diversify its portfolio, gain a stake in growing brands, and accelerating growth in smaller brands with the help of its distribution network and marketing muscle.

The company has made high-profile deals with Keurig Green Mountain and Monster Beverage and has also snatched up smaller brands like Zico coconut water. However, Coca-Cola isn't the only legacy food and beverage company to pursue such upstart brands. Competition among those companies has lifted prices for smaller consumer packaged goods businesses, and a number of CEOs have complained that prices for fast-growing brands are simply too high.

Dr Pepper Snapple was the most recent beverage company to land a big deal, acquiring Bai Brands, which makes low-calorie antioxidant-infused beverages. It paid $1.7 billion for Bai, or a multiple of about 4 based on the company's revenue this year, and the company said it would be accretive to EPS next year. Still, Bai would have to bump up Dr Pepper's earnings 10% to justify its price tag.

Coca-Cola stock has coasted on its historical reputation, defensive position, and as a favorite of Warren Buffett, but the company will eventually have to deliver meaningful earnings growth. With consumer perception worsening and acquisitions looking expensive, that won't be easy.