Nothing can defy logical Wall Street valuations like a good story stock. And you'd be hard pressed to find a better story stock, and story teller, than Tesla (NASDAQ:TSLA) and its CEO Elon Musk. With production currently ramping up for its lower priced Model 3, the electric automaker is quickly approaching a critical make or break point in its short lifespan. The automaker's story comes with a significant price tag as producing automobiles is not an easy or cheap task, but with its recent debt raise one thing has become clear: Wall Street is still buying into the Tesla story.

Quickly after Musk acknowledged on Tesla's recent earnings conference call that the company would look to raise capital but wasn't considering an equity raise, it was confirmed that the automaker would opt to raise $1.5 billion in debt to help fund the acceleration of Model 3 production. If you're looking for a positive spin, the move to take on more debt protects shareholders from more dilution. The rule of thumb is, essentially, if you believe your company will be hugely successful long term you'd often opt for debt over sharing its lucrative future returns with more shareholders. Further, Tesla has already tapped the equity markets and diluted its shareholders a decent amount as you can see below. 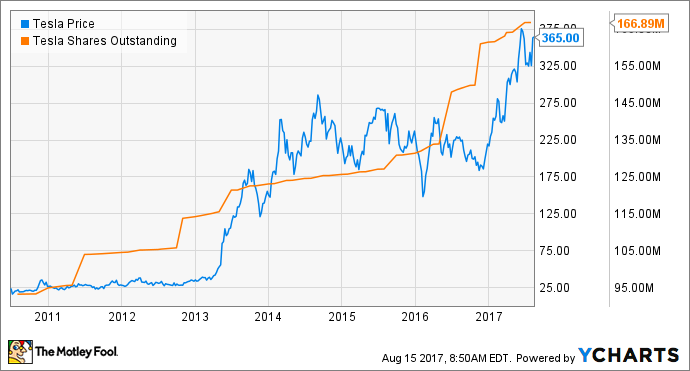 Despite the company's shares outstanding jumping significantly over the past half decade, it was indirectly accompanied by Tesla's rising share price as investors were more than willing to accept the dilution to fund the company's near-term cash crunch.

The downside of Tesla's decision to take on debt is the fact that it already has a leveraged balance sheet. At the end of June, Tesla's total debt checked in at $8.1 billion. That splits into $5.6 billion in recourse debt and $2.5 billion in non-recourse debt from its SolarCity acquisition -- which is largely secured by leased solar systems -- and this new debt will bring its total to roughly $9.6 billion. That's only about $1 billion less than General Motors' (NYSE:GM) automotive debt, which is an automaker that dwarfs Tesla in size, scale, operations, units sold, and assets. 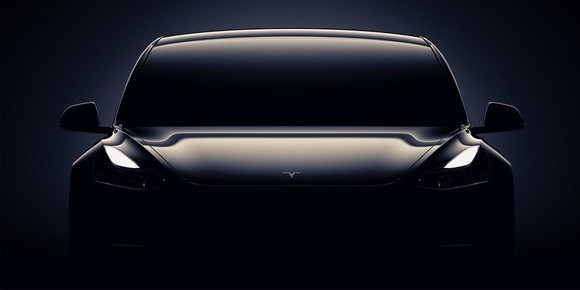 Was raising debt the right move?

Similar to investors jumping on board despite each phase of shareholder dilution, analysts on Wall Street continue to buy into Tesla's growth story despite taking on more debt. In fact, Tesla has received a number of positive notes from analysts as investors digest the debt offering. Argus Research analyst Bill Selesky increased his rating on shares from hold to buy and thrust a dramatic $444 price target on Tesla, compared to its current price of $365. Morgan Stanley boosted its stock price from $305 to $317 as analyst Adam Jonas felt more comfortable with capital expenditures and was optimistic about Model 3 deliveries in the near term. Baird analyst Ben Kallo moved his price target from $368 to $411 and warned shorts that the Model 3 production ramp and other upcoming catalysts will drive shares higher.

Regardless of the downside to raising debt, or whether you'd have preferred Tesla offer new shares, the fundamental point is far simpler. The Model 3 is a make-or-break product for the young electric automaker if it ever plans to turn into anything resembling a mass-market automaker, or to tip the balance in favor of electric vehicles rather than traditional vehicles -- even if that transition isn't achieved until far down the road. And the Model 3 can't be conjured out of thin air. Making vehicles in a notoriously capital-intensive industry comes with a massive price tag. The only thing that matters now is that investors and analysts are willing for the company to take on the debt required to make that happen, and that makes raising debt the correct and necessary decision.