"We used to have the greatest infrastructure anywhere in the world, and today we're like a third-world country," President Donald Trump said at a press conference Tuesday. "No longer will we allow the infrastructure of our magnificent country to crumble and decay."

While Americans continue to wait for any actual legislative proposals that put the details to Trump's plan -- at this point, all we've heard is that it will be $1 trillion infrastructure package to fix the nation's crumbling bridges, roads, pipelines, water systems, etc. -- he seems confident that whatever bill his administration eventually crafts will be met with bipartisan support. If he's right, it could be great for investors who hold these two stocks: United Rentals (NYSE:URI) and US Concrete (NASDAQ:USCR).

Renting rather than buying

United Rentals, as the name would suggest, is the world's largest equipment rental company, with a store network roughly three times the size of the next closest provider, boasting locations in 49 states as well as 10 Canadian provinces. As investors would expect, United Rentals thrives when construction and infrastructure industries are booming due to the specialized nature of the industrial equipment it offers. The good news is that America's infrastructure needs help, and Trump's potential infrastructure package could lead to that help arriving sooner rather than later. But IHS Markit predicts solid growth for its segment over the next few years regardless. 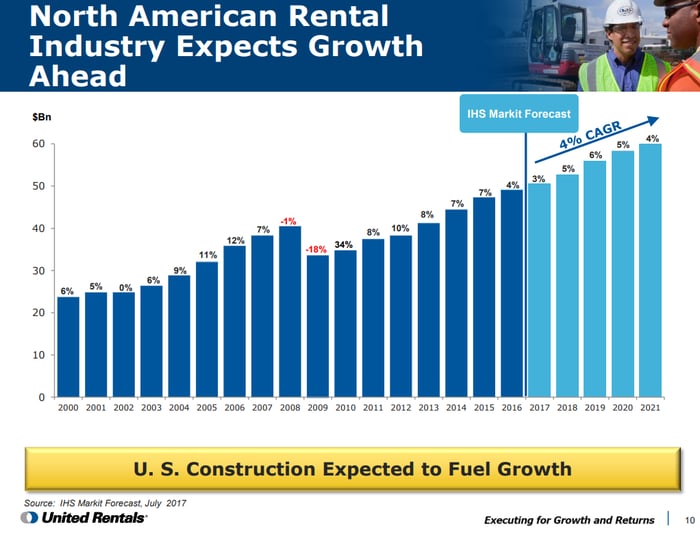 My investment thesis for United Rentals' is based on two things: first, that renting instead of buying has advantages that will drive consumer demand;  and second, that the company will grow in part through valuable acquisitions.

Consider that renting large industrial equipment helps businesses control expenses and inventory in a cyclical industry, and saves them on storage and warehousing for the equipment. Renting also removes the need for maintenance, and URI offers 24/7 customer care and expects rental penetration will continue to grow for those reasons, among others.

Management is optimistic it can continue to grow its top and bottom lines through acquisitions, and United Rentals has a strong track record with them. In fact, between 2010 and through the first half of 2017, the company has spent almost 30% of its cash from operations and debt issuance on acquisitions. Over the past two decades, it has executed more than 250 transactions, from large-scale purchases to bolt-on acquisitions, and even minority investments in innovative products and services. One example from this week is United Rentals' agreement to acquire Neff Corp. -- one of the 10 largest U.S. equipment rental companies, with a concentration in the South -- for $25 per share in cash, or roughly $1.3 billion. Neff is expected to be immediately accretive to cash earnings-per-share and free cash flow.

Ultimately, if construction companies continue to see value in renting over owning equipment in a cyclical industry at a time when America's infrastructure needs investment, United Rentals will be a smart stock to own; Trump's potential infrastructure plan could just be icing on the cake.

U.S. Concrete is a vertically integrated national producer of ready-mixed concrete that does business in the commercial/industrial, residential, and street, highway and public works segments -- and boasts a top-three position in many major markets. It generates high margins as a supplier to well-known projects such as Facebook's data center in Fort Worth, Texas, LaGuardia Airport in Queens, New York, or Toyota's North American headquarters in Plano, Texas, just to name a few. But a boost in infrastructure spending would likely mean good things for its street, highway and public works segment.

While this company, too, operates in a cyclical industry that is dependent upon construction levels in various segments, it has a proven track record of driving growth through acquisitions. Consider that in the 12-month period ending March 31, 66% of its adjusted EBITDA was organic while 34% was generated by acquisitions completed since 2014. In fact, it has completed 25 ready-mixed concrete and aggregates acquisitions since the same 2014 time-period, and will continue to pursue valuable bolt-on acquisitions in attractive markets. 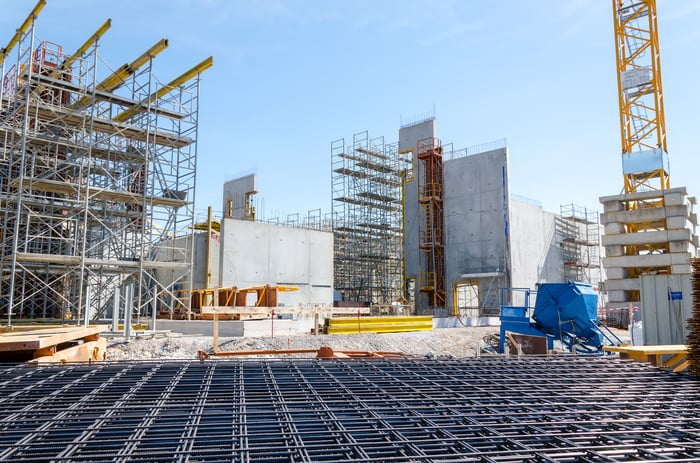 U.S. Concrete faced tough times during the recession and the years that followed, but from 2011 through March 31, 2017, its revenue expanded at a compound annual growth rate (CAGR) of 19.1%. Over the same period, its adjusted-EBITDA CAGR reached a staggering 56.5%. To be fair, it started at a small base of $12 million, but it grew substantially to $175 million.

Ultimately, the company has achieved a stark turnaround from where it stood in the great recession, and has been chugging along nicely in 2017. Management also believes that the economy is still in the early stages of the current construction cycle, which could be extended by governmental infrastructure spending -- making this a great stock for investors hoping to capitalize on the policies of Trump.

If You Believe Trump, Here are 2 Stocks to Own @themotleyfool #stocks $URI $FB $TM $USCR Next Article
Current