Despite beating Wall Street expectations, online travel agency The Priceline Group (NASDAQ:BKNG) stock fell over 7% after announcing Q2 numbers. Much of the blame has been pinned on a weaker than expected forecast but with a history of sandbagging, Wall Street should be skeptical of Priceline's quarterly guidance. The company has only guided toward consensus estimates twice in the last two years. Yet Priceline has crushed Wall Street estimates by an average of 7.8% over that same time period.

With the stock trading at a lofty 40 times trailing-twelve-months earnings and 8 times sales, something like a weak forecast, despite its lack of credibility, may have been reason enough to exert pressure on Priceline stock. However, there are a couple items of note that came out of the second quarter report that investors should be nervous about.

Removing currency effects, year-over-year gross bookings increased 19% in the second quarter. Gross bookings is a key metric for Priceline as it captures the total dollar value of all travel services booked through Priceline brands. While 19% bookings growth appears impressive on the surface, it was a marked slowdown from the 27% year-over-year growth it achieved in the first quarter of this year. It was also the slowest growth rate the company has experienced since the heart of the global recession in the second quarter of 2009. 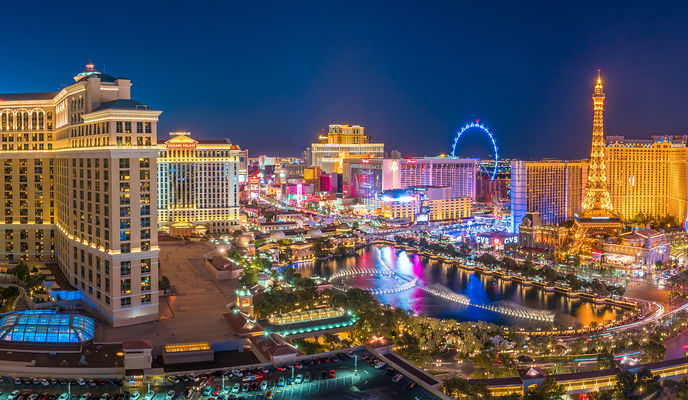 Given Priceline's size, bookings growth was eventually going to slow. The company booked nearly $21 billion in travel in the second quarter. However, even after the decline in growth rate, Priceline stock is still priced at multiples where the market expects heavy growth. Yet management is forecasting gross bookings to increase only 9% to 14% in the third quarter. Given management's history, the forecast is likely conservative. However, if bookings growth even falls near the high end of its forecast, Priceline stock will likely be under even more pressure.

The Priceline brand is popular in the United States for its quirky William Shatner ads, but most of its financial success can be attributed to Europe. Priceline acquired Amsterdam-based Booking.com in 2005 for $133 million, which may have turned out to be the biggest bargain in corporate history. In company filings, it mentions that the "substantial majority" of its international business, which is 88% of total gross profits, is generated by Booking.com.

A couple years later, the company acquired Agoda, an online travel company based out of Bangkok and Singapore. Priceline claimed solid bookings growth by Agoda in the second quarter, but it hasn't had the same measure of success in Asia as Booking.com has had for its European market. Priceline doesn't break out its business by region past 'domestic' and 'international' but there are some clues as to how the Asian market is performing.

With Booking.com contributing 88% to international gross profits, Asia likely has a minimal contribution to the company's success. On the second quarter conference call, CEO Glenn Fogel confirmed this when commenting on profitability challenges in Asia:

If you look at prices for accommodations in Asia, it is one of the most competitive places in the world. And that makes it more difficult for public companies that have certain desires to hit profitability levels versus a private company perhaps that isn't constrained the same way and goes out and raise capital and then gives it away in the marketplace to the consumer with discount and in fact at a loss type accommodations. That makes it more difficult.

The numbers back up the comments by Mr. Fogel as the company saw pressure on take rates, or the amount of commissions that Priceline collects on its bookings. As indicated in the graph below, the company's gross profits growth hasn't kept up with gross bookings growth in four of the last five quarters. The company blamed part of that on timing, but also noted that Agoda was experimenting with discounting, which had a negative effect on take rates. 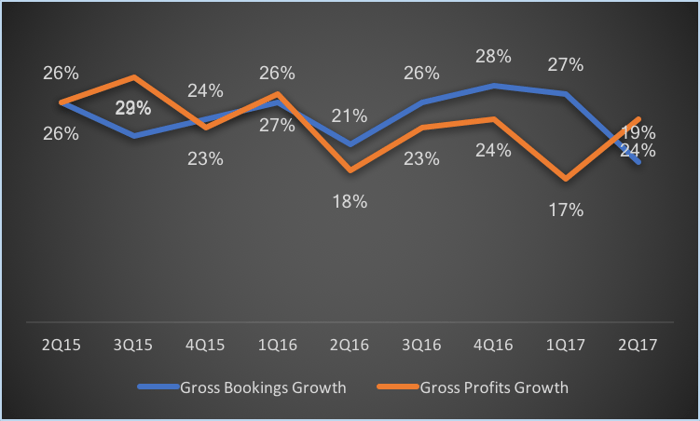 Despite competitive pressures, Mr. Fogel was optimistic about Asia, especially given the rapid increase in travelers to the continent. He expects China to be its greatest source of growth going forward. However, he also called it a "land grab" that is highly competitive and admitted it's tougher for a non-Chinese company to compete in that market. However, that doesn't mean Priceline is not trying. The online travel giant has a partnership and $2 billion investment with Ctrip, the number one online travel company in China. Whether that plays out successfully remains to be seen, but given that the company has owned Agoda for 10 years and not made significant inroads, it's reasonable to believe that Priceline will be challenged to find growth once the European market opportunity dries up.

Priceline giving a conservative guidance shouldn't come as a surprise to long-term investors. The company has made a habit of combining strong quarterly results with weak projections about its future. However, this quarter may be an inflection point where strong quarterly results may be coming to an end. If that trend plays out, hotels and airfare won't be the only price that will be negotiated.