Off-price retail giant TJX (NYSE:TJX) still gets the bulk of its revenue and profit from the T.J. Maxx and Marshalls chains, which primarily sell apparel, shoes, and accessories. However, in recent years, the HomeGoods chain has become an increasingly important source of growth.

In the first six months of fiscal 2018, HomeGoods has stood out even more. Year-to-date, TJX has reported modest 2.9% sales growth at its Marmaxx segment, which includes both T.J. Maxx and Marshalls. The segment's profit has actually declined slightly on a year-over-year basis. By contrast, HomeGoods has continued on its explosive growth trajectory.

HomeGoods has put together a run of strong growth in the past few years. Comparable store sales rose 6% last year, following an 8% gain in fiscal 2016 and 7% growth in fiscal 2015.

Meanwhile, TJX has opened dozens of new HomeGoods stores each year. (The chain had 579 locations by the end of fiscal 2017, up from 374 just five years earlier.) During that period, revenue nearly doubled and segment profit surged 162%.

HomeGoods' growth slowed marginally in the first quarter of this year, amid a broader retail slump. Comparable store sales rose 3%, while net sales rose "only" 11%.

Of course, this could hardly be considered a real slowdown, considering that many big retailers are posting outright sales declines. In any case, HomeGoods' sales accelerated again last quarter, with total sales up 17% on a 7% comp sales increase. Management now expects the chain's total revenue to surpass $5 billion this year.

Plenty of room for further growth

As of earlier this year, TJX's management estimated that HomeGoods could eventually grow to be a 1,000 store chain in the U.S. However, HomeGoods' ongoing success makes that estimate seem very conservative.

TJX now plans to open nearly 100 HomeGoods stores this year -- some of them inside larger T.J. Maxx or Marshalls stores. With comp sales growth still strong across the rest of the chain, it's clear that this accelerated expansion isn't coming at the expense of existing stores. This suggests that the U.S. market could ultimately support more than 1,000 HomeGoods stores.

Indeed, the market for home-related goods and services is massive and growing quickly. This is driving strong sales increases even at much larger retailers like The Home Depot (NYSE:HD), which is likely to reach $100 billion in revenue this year. Thus, HomeGoods has plenty of room to gain market share, while also participating in the market's growth.

To continue gaining share in the home market, TJX decided earlier this year to open a second home-focused chain in the U.S.: HomeSense. The first store opened just a few days ago in Framingham, Massachusetts.

TJX has designed the HomeSense chain to be complementary to HomeGoods, hoping that customers will shop both chains. HomeSense will have expanded sections for furniture, art, and lighting. It will also have a new "General Store" department with a variety of hardware, cleaning, and other home improvement supplies.

Based on this merchandise selection, it appears that TJX hopes to skim some revenue from home improvement retailers like Home Depot. Of course, HomeSense won't compete with Home Depot and Lowe's in categories like paint, plumbing, lumber, and other building supplies. But categories like tools, hardware, decor, and lighting are all multi-billion dollar businesses for Home Depot, providing plenty of opportunity for HomeSense.

TJX stock is on sale

Shares of TJX have fallen significantly over the past few months, amid broader concerns about the future of brick-and-mortar retail. However, investors should see this as a buying opportunity. 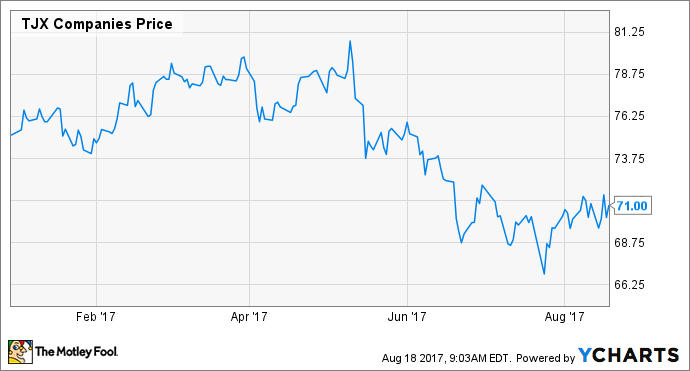 While comp sales increases are slowing at T.J. Maxx and Marshalls, those chains still have room to grow. Yet HomeGoods and HomeSense represent TJX's real growth opportunity -- at least within the United States. It seems entirely plausible that these two concepts could grow from $5 billion in sales this year to $15 billion or more in annual sales a decade from now.