Every dog stock has its day, and sometimes its week. Shares of Snap, Inc. (NYSE:SNAP) soared 19.4% last week, moving higher after a pair of bullish analyst moves and a report that its Snapchat Discover video content platform is a hit.

Snapchat's parent company has been in the doghouse since shortly after going public at $17 in early March. Snap stock has moved lower in its first five months of trading, but last week's move pushes the investment into positive territory for the month of August. Even weekly moves higher have been rare given its swift and steady descent after the initial IPO buzz. Last week's move tops the 16% gain investors experienced in its third week on the market, making last week's move its biggest percentage pop in its brief stint as a publicly traded company. 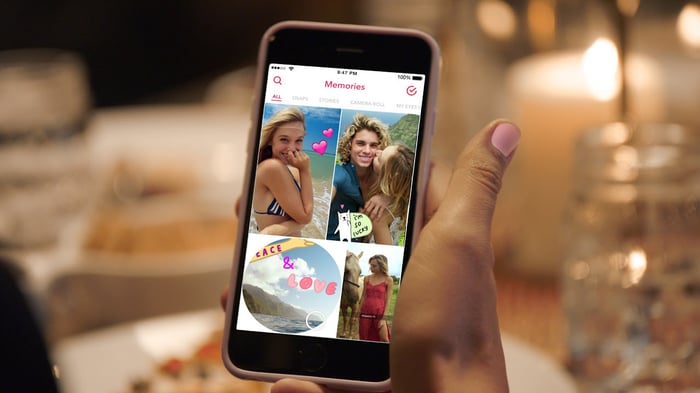 The long road back

Snap's best week ever began on Monday with the lock-up agreement expiration of some of its shares. The market's been fretting for months about the IPO lock-up expiration on July 31, but roughly 782 million of those shares were held by employees who were subject to a pre-earnings blackout period. The window to sell on those shares opened on Monday, and the lack of selling -- shares of Snap rose in each of last week's five trading days -- was a sigh of relief for beleaguered longs.

The good news didn't end there. Cantor Fitzgerald analyst Kip Paulson upgraded the stock on Tuesday, boosting his rating from neutral to overweight. He feels that risk/reward proposition shifted bullishly following Monday's lock-up expiration and the stock's lower share price since putting out disappointing second-quarter results a week earlier. He sees average revenue per user -- already more than doubling over the past year -- continuing to grow in 2018 and beyond.

Victor Anthony at Aegis followed two days later, increasing his price target from $14 to $15. He's sticking to his hold rating on the shares, but it's the first time that a Wall Street pro has increased Snap stock's price goal. Anthony had a management call with Snap executives, and while he still has near-term concerns about Snapchat's ability to draw more advertisers, compete against Instagram, improve its analytics, and solve its user growth issue on Android devices, he was obviously encouraged enough to boost his price target.

The other bullish development was a report by Axios discussing the initial success that Snap is having with Snapchat Discover that gives mainstream media companies a platform to push short-form content to Snapchat's growing audience of millennials. NBC News' Stay Tuned -- a Snapchat Discover show that airs twice on weekdays and once on weekends -- has reportedly attracted nearly 30 million unique viewers in its first month. Snapchat Discover is emerging as a way for media giants to reach young viewers.

It wasn't all bullish news for Snap last week. SunTrust did initiate coverage with a bearish rating and a $10 price target. The stock's bounce could also motivate some employees to sell the pre-IPO shares that were cleared to hit the market on Monday. However, given Snap's rocky first five months of trading, any gain is encouraging.