There was some great information about the company's future prospects covered on the analyst conference call following the earnings release. One of the best nuggets involved CEO Jensen Huang and CFO Colette Kress discussing the emergence of two new applications for the company's data-center platform, which is already growing like lightning. 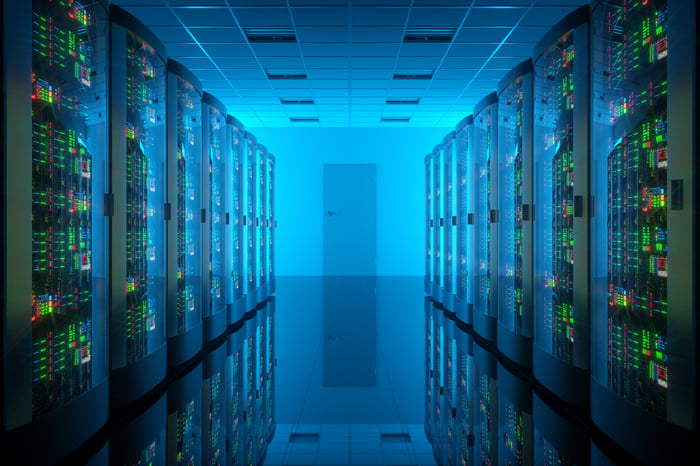 Kress said on the call, "Looking ahead, we see inferencing and video transcoding as emerging applications that are well suited for our GPUs [graphics processing units]." Huang reiterated her comment and expounded on transcoding:

And so the number of applications where GPUs are valuable, from training to high-performance computing to virtual PCs to new applications like inferencing and transcoding ... are starting to emerge. ...

[T]he new application that [is] coming online ... which is likely to overwhelm the Internet in the near future ... is live video. Consumers taking live video on their phones and sharing with their friends ... there are going to be hundreds of millions of these happening all the time. And each one of these videos will have to be transcoded to a variety of formats to be shared ... you have to perform AI [artificial intelligence] on [them] instantaneously so that you could avoid inappropriate video from being streamed to large audiences.

From the above context, you might guess that video transcoding involves taking compressed (or encoded) content, decompressing it, changing the format, and then recompressing it. Transcoding enables people to share their videos with a larger audience.

That's right, rather than some folks just sharing photos of their daily meals, the world should soon be seeing more videos of said meals! NVIDIA investors can take some solace in knowing that their company is poised to profit from increased sharing of videos. 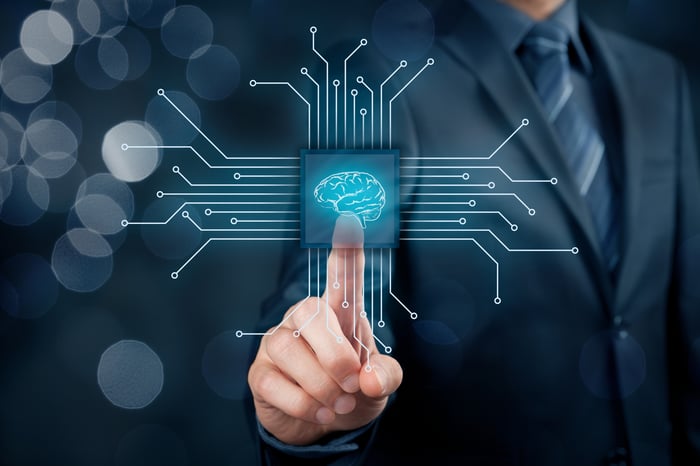 Artificial intelligence at one's command? If so, the Scarecrow in the Wizard of Oz could stop lamenting, "If I Only Had a Brain." Image source: Getty Images.

Inferencing is the second step in the two-step process of deep learning, which is a branch within artificial intelligence (AI) that aims to mimic human thought processes. NVIDIA's GPUs are already used in the first step, training, which involves an entity training its artificial "neural networks" how to think, or make inferences.

He also summed up the company's business opportunity on the same call:

[W]e do 0% of our business in inferencing and it's 100% on CPUs [central processing units]. ... [T]here are 10 million CPUs in the world in [the] cloud, and today, many of them are running Hadoop and doing queries and looking up files and things like that. But in the future, the belief is that the vast majority of the world's cloud queries will be inference queries, will be AI queries.

Google is a data-center competitor to watch. In May, the tech giant announced the second generation of its Tensor Processing Unit (TPU), designed to run its deep-learning algorithms. Its first-generation TPU only performed inferencing, whereas the new-generation chip can also handle training. In addition to the company using these chips for internal purposes, it plans to make them available for others to use via Google Cloud, just as NVIDIA's GPUs are.

While this development could hurt NVIDIA's business from Google, the risk is limited at this point. Google hasn't announced plans to make its TPUs commercially available to others.

In the most recent quarter, Q2 of fiscal 2018, revenue from NVIDIA's data-center platform surged 175% year over year, to $416 million. This torrid growth was driven by the rapid adoption of the company's GPU-based deep-learning approach to AI, and strength in high-performance computing and GRID graphics visualization.

In just one year, data-center revenue went from comprising 10.6% of the company's total revenue to 18.7% of it. Clearly, this platform is on track to become an increasingly larger part of NVIDIA's business. The two newer emerging data-center applications -- deep-learning inferencing and video transcoding -- are icing on the cake. (You want to see a video of that cake?)