Investors hoping that CSX Corp. CEO Hunter Harrison will bring about the operational improvements required to justify the optimism that's currently baked into its stock price may want to benchmark its performance against peers Union Pacific Corp. and Norfolk Southern Corp. The former is its closest peer in terms of valuation, and the latter is its most important direct competitor. In this line of thought, let's take a look at what Harrison needs to do at the freight railroad operator, and whether its most recent earnings report suggests he's starting to make a difference.

What CSX needs to do

In the second-quarter earnings report, CSX's management reaffirmed its adjusted expectations for 2017 (excluding restructuring charges). Key details of the guidance:

The key metric to follow here is the operating ratio, which is simply operating expenses divided by revenue. It follows that an operating ratio of 65% for 2017 (implied in CSX's guidance) means operating income margin will be 35%. As you can see below, this would mark a significant improvement, and get CSX back to a margin comparable to West Coast-focused railroad Union Pacific. Interestingly, an operating margin of 35% would also be significantly better than that of its direct competitor, Norfolk Southern. 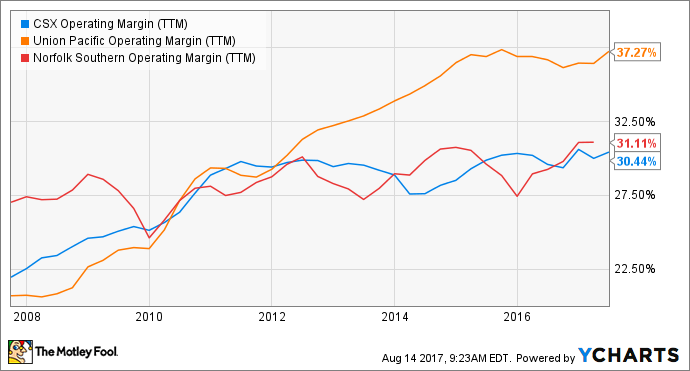 As you can see below, the stock's rise in 2017 has decoupled from its peers' valuations, as the market anticipates improvements in CSX's operating performance and profitability in the future. 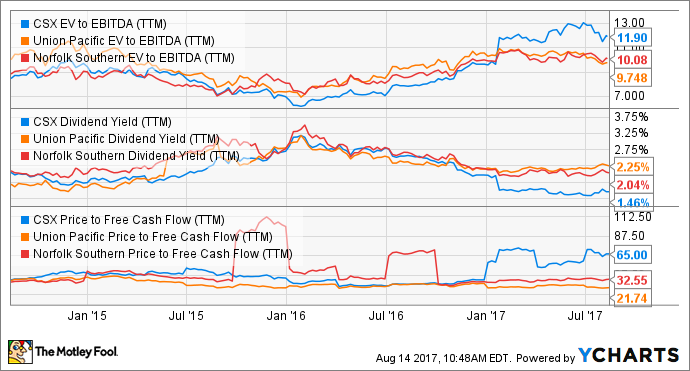 Harrison's plan to get to an operating ratio in the "mid-60s" in 2017 involves the implementation of his Precision Scheduled Railroading model. Essentially, this means that CSX's trains will run on tightly set schedules (whether they are full or not, with the possibility that pricing could be used to increase demand) rather than running flexible schedules and adjusting locomotives and cars accordingly.

The good news from the second quarter was that the company made progress on both an absolute and relative basis. The quarter was good for the railroad industry broadly, as strong increases in coal transport volumes and revenue -- compared to particularly weak numbers from last year -- created solid volume growth, and improved pricing led to good revenue growth from all three companies.

However, it's the last three columns in the table that reveal the underlying operational gains. On an absolute basis, CSX's performance has improved, as train speeds and fuel efficiency increased, while terminal dwell time (time spent at scheduled stops) has decreased. Moreover, while CSX's metrics improved, Norfolk Southern and Union Pacific both lost ground.

These results are a welcome development for investors, who would have surely been disappointed by press reports of customer dissatisfaction with CSX's service levels. Given the significant changes CSX is making to its operations, it's not surprising that some customers have experienced service disruptions -- according to Reuters, Harrison wrote to customers to apologize for disruptions he attributed to employee pushback.

How to think about CSX stock

As the charts above show, the market has merrily priced improvements into CSX's shares already. Therefore, any failure on its part to hit its operational performance targets for 2017 could result in the stock getting punished. Moreover, the second half contains some potential headwinds with automotive production set to slow and year-over-year comparisons for coal freight getting tougher.

In conclusion, CSX Corporation is only worth holding if you have a high degree of confidence in management's ability to hit its operational goals and believe its end markets will remain favorable. There is very little margin of safety baked into the stock price right now.