iRobot Corporation (NASDAQ:IRBT) has made a lot of headlines in the past year and for good reason. The company trounced estimates four quarters in a row with the last quarter being most impressive as iRobot earnings beat analysts' expectations by a whopping $0.55 per share. With that kind of performance and with both net income and free cash flow sitting near historic highs, some might be wondering if it is time for the company to initiate a dividend. Let's take a look and see whether initiating a dividend would be in the best interest of iRobot shareholders. 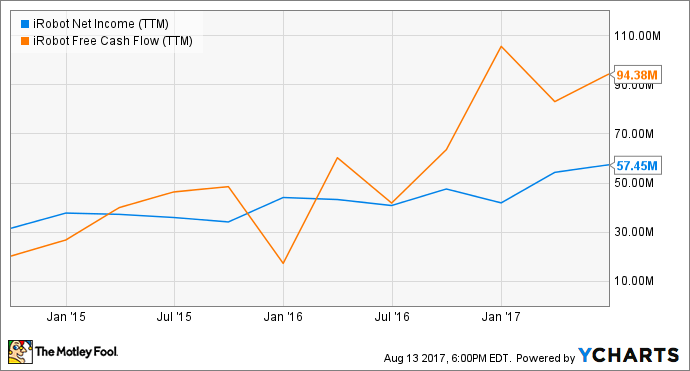 For one thing, iRobot jettisoned its defense business in 2016, making its overall operation more focused as a consumer driven company. The other significant recent events include the closing of an acquisition of a Japanese distributor and an announcement of an upcoming acquisition of its largest European distributor, Robopolis.

Mostly, however, the company has just executed flawlessly. Product launches have been successful and iRobot currently takes three of the top four spots in the ranking of robotic vacuum cleaners. Customer focused days have been incredibly successful with sales on Amazon Prime Day doubling over a year ago. In addition, the sales of premium Roomba products doubled on the 618 shopping holiday in China when compared to the same holiday in 2016. 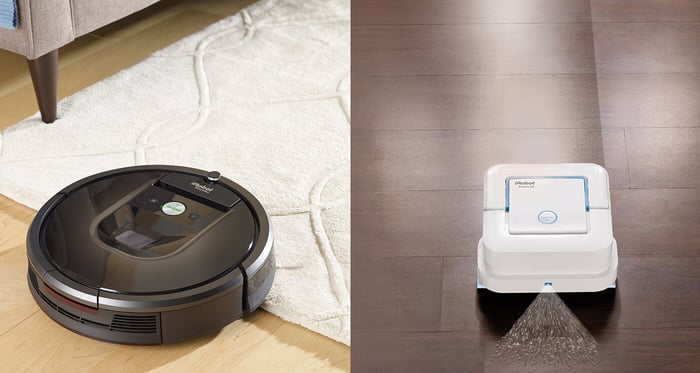 When we crunch the numbers accounting style, things are equally impressive. Sales in the past quarter are up 23% year over year, net income is up 64.2%, gross margin is up 2.3%, and free cash flow is at a historic high of $94.38 million. Quite simply, this is a company firing on all cylinders.

"Could" and "should" are two different things

With an abundance of free cash flow, a cash balance of $9.45 per share, and a current ratio of 3.54, it is clear iRobot has the means to initiate a dividend if management wanted to do so. However, just because they can, it doesn't mean they should. iRobot CEO Colin Angle had made it clear he doesn't plan to initiate one anytime soon. In the company's press release, Colin indicated he would use profits to reinvest in the future of the company and continue to be an industry leader in this rapidly growing market.

The bottom line is that it all comes down to optimal capital allocation. iRobot is the industry leader in a rapidly growing market. When you are a growing company in an expanding market, the best use of capital is to reinvest in your company's growth. Sure, iRobot could initiate a small dividend, but that would be short-sighted.

By investing instead in the company's growth, the hope is that shareholders will reap even greater rewards. Perhaps some day down the road when automated household robots become a more mature industry and the company is throwing off more cash than it can invest, then a dividend will be in the cards. Right now, though, iRobot currently has better places to deploy its cash.